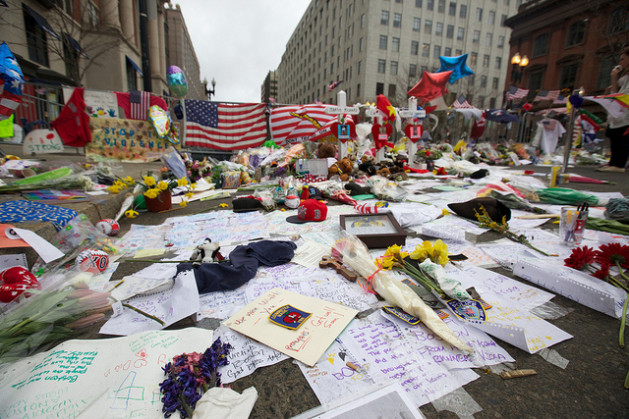 A shrine to the victims of the Boston bombing. Credit: Vjeran Pavic/cc by 2.0

WASHINGTON, Apr 22 2013 (IPS) - Civil liberties and human rights groups are applauding the White House’s announcement Monday that Dzhokhar Tsarnaev, the lone surviving suspect in last week’s bombing in Boston, will not be charged as an enemy combatant, as some conservative politicians here had been urging.

The widely debated legal designation would have allowed for a much lengthier detention – potentially indefinitely – and would also have imposed fewer qualifications on the government’s ability to interrogate Tsarnaev. Some have also suggested that the label could have shifted jurisdiction for the case to the military, though this would have conflicted with Tsarnaev’s rights as a U.S. citizen.

"There seems to be a false sense that somehow a military response is a stronger response, and that’s really off the mark." -- HRF's Raha Wala

Nonetheless, many groups are decrying the U.S. government’s decision to begin interrogating the 19-year-old Tsarnaev without reading him what are known here as his “Miranda rights”, a due process assurance that requires law enforcement to verbally explain a suspect’s legal rights. These include rights to legal representation and to refuse to answer officials’ questions.

“As to whether he’s an enemy combatant, this was not really a close decision at all,” Raha Wala, a senior counsel with Human Rights First (HRF), a Washington advocacy group, told IPS. “Here we have individuals engaged in criminal terrorist operations, and that should be handled by civilian authorities. It’s hard to see any connection here to ongoing armed conflict or even broader extremist operations.”

The announcement puts an end a fast-rising debate over how to deal with Tsarnaev, who was captured Friday.

“He will not be treated as an enemy combatant,” White House spokesperson Jay Carney told reporters Monday. “We will prosecute this terrorist through our civilian system of justice … This is absolutely the right way to go and the appropriate way to go.”

Tsarnaev was charged Monday with using a weapon of mass destruction to injure and kill people, an accusation that could carry the death penalty. Last Monday, Tsarnaev and his brother, Tamerlan, allegedly killed three people and seriously injured more than 100 at the finish line of the Boston Marathon, where they are said to have set off two homemade bombs made from pressure cookers packed with nails and other metal.

Tamerlan Tsarnaev was killed Friday in a shoot-out with police, while his younger brother was captured, badly injured, after a massive police search.

Thereafter, some conservatives have cited Dzhokhar Tsarnaev’s alleged links to militant Islam as a motivating rationale for designating him as an enemy combatant.

“You can’t hold every person who commits a terrorist attack as an enemy combatant,” Senator Lindsey Graham, one of the most outspoken advocates of using the designation for Tsarnaev, admitted to the media over the weekend.

“But you have a right, with his radical Islamist ties and the fact that Chechens are all over the world fighting with Al Qaeda … to go down that road, and it would be a big mistake not to go down that road. If we didn’t hold him for intelligence-gathering purposes, that would be unconscionable.”

In Tsarnaev’s case, however, U.S. law appears to be straightforward, given that the suspect, although born in Kyrgyzstan, became a naturalised U.S. citizen last fall.

Rights groups have excoriated other elements of the administration’s handling of the Tsarnaev case, however. Particular concern is being paid to the decision to proceed with interrogations outside of the ambit of the suspect’s Miranda rights, with officials invoking a recently expanded exemption in cases involving public safety.

“The Miranda warnings were put in place because police officers were beating and torturing ‘confessions’ out of people who hadn’t even been formally accused of a crime. We cannot afford to repeat our mistakes,” Vincent Warren, the executive director of the Center for Constitutional Rights (CCR), a legal advocacy group, said in a statement, noting that this has been the longest such exemption to date.

“If officials require suspects to incriminate themselves, they are making fair trials and due process merely an option and not a requirement. To venture down that road again will make law enforcement accountable to no one.”

As of Monday evening, police reports suggested that Tsarnaev, suffering from a gunshot in the neck, could not speak but had begun initial questioning, reportedly writing down answers to basic questions.

Detainee rights in terrorism cases are particularly polarised today given the recently stepped-up debate over the U.S. military prison in GuantanamoBay. There, new reports suggest that around half of remaining detainees are on hunger strike to protest their indefinite detention, which scholars have repeatedly suggested violates international law.

CCR’s Warren explicitly linked the two issues, noting: “Like Obama’s expanded killing programme and his perpetuation of indefinite detention without trial at Guantanamo, this is yet another erosion of the Constitution to lay directly at the president’s feet.”

Despite President Obama’s failure to follow through on 2008 pledges to close the prison at Guantanamo, the administration is seeing Monday’s announcement as being in line with a broader push against efforts to emphasise military over civilian justice in terrorism cases.

“It is important to remember that since [the attacks of Sep. 11, 2001], we have used the federal courts system to convict and incarcerate hundreds of terrorists,” White House spokesperson Carney noted Monday. “The effective use of the criminal justice system has resulted in the interrogation, conviction and detention of both U.S. citizens and non-citizens for acts of terrorism committed inside the United States and around the world.”

Although President Obama did make early attempts to have some high-profile terror suspects tried in the federal court system, public backlash scuppered the plan. In March, however, the administration decided to have Sulaiman Abu Ghaith, a former Al-Qaeda spokesperson and son-in-law of Osama bin Laden, put on trial in New York City.

Rights groups have suggested the move offers a new precedent for terrorism-related trials.

“The big dynamic following the Abu Ghaith decision is that the Obama administration is now clearly pushing in the right direction – towards using systems that work,” HRF’s Wala told IPS.

“There seems to be a false sense that somehow a military response is a stronger response, and that’s really off the mark when you look at how terrorism cases have proceeded. Fortunately, the U.S. criminal justice system has made lots of advances since 9/11 in handling terrorism cases and avoiding the uncertainties of detention at Guantanamo.”