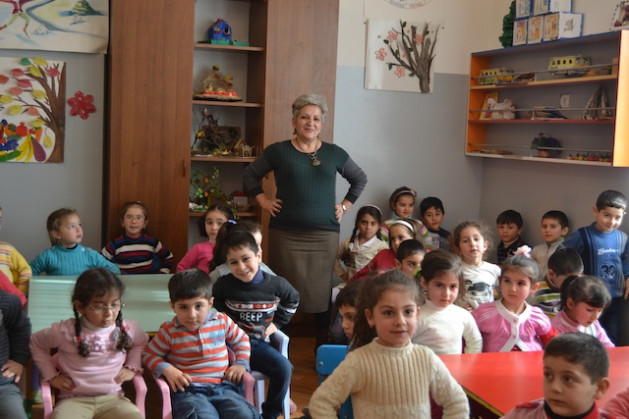 Irina Grigoryan, director of a kindergarten in Stepanakert, capital of the Nagorno-Karabakh Region (NKR), does not want to lose another generation to war. Credit: Enzo Mangini/IPS

STEPANAKERT (Nagorno-Karabakh Republic, Caucasus), Apr 12 2013 (IPS) - Sixty-year-old Irina Grigoryan’s voice is drowned out by the merry noise of 230 children waiting for their lunch. Director of kindergarten N3, located in Stepanakert, capital of the self-proclaimed Nagorno-Karabakh Region (NKR) deep in the Caucasus, Grigoryan smiles tolerantly at the din.

But the poster hanging on the wall behind her desk – picturing a single dove flying above the words “Give peace a chance” – suggests that all is not well in this misty, mountainous city of 50,000 people, 2,400 kilometres south of Moscow.

In fact, NKR, nestled between Azerbaijan and Armenia, is in the middle of a long-forgotten war.

Two communities, Armenians and Azeris, who lived side by side for many years, are now wrenched apart.
When the USSR was still alive, Nagorno-Karabakh was an autonomous region, but in 1936 the Russian dictator Joseph Stalin handed it over to Azerbaijan, sparking calls for autonomy by the primarily Armenian population.

At the end of the 1980s, amidst the rubble of the crumbling Soviet Union, opposition to Azeri rule grew more vocal, and Stepanakert saw mass demonstrations of citizens demanding that they be allowed to join the Soviet republic of Armenia.

At the end of 1991, the population of 191,000, 75 percent of which was Armenian, proclaimed an independent Nagorno-Karabakh Region (NKR) – a month later, in January 1992, Baku sent in its troops to quell the secessionist movement.

Fault lines between Azeris and Armenians remain deep. Armenians blame Azeris for the pogrom in Sumgait, a city of 300,00 in Azerbaijan roughly 30 kilometres from Azerbaijan's capital Baku, where in late February 1988, Azeria mobs killed 32 Armenians and injured 2,000 more.

The killing spree forced thousands of Armenians to flee westward to what was then the soviet republic of Armenia, which eventually gained independence after the fall of the USSR.

And on the other side of the buffer zone, Azeris continue to blame Armenian troops and militias for what they perceive to be the darkest episode of the 1992-1994 war, the wholesale massacre in Khojaly, a small village a few kilometres east of Stepanakert, in February 1993.

Official Azeri sources say roughly 650 civilians, including children and women, were killed, many of them shot in the head at close range, while scores of bodies were dismembered.
Azeris blame the massacre on Armenian troops who stormed the village in their push toward the city of Agdam, 30 kilometres east of Stepanakert, though Armenian authorities dismiss the charge.

Without an independent investigation on the events, the issue remains unresolved, sowing further pain and mistrust between the two communities.

Grigoryan believes that there is hope for reconciliation, especially as civil society gains a stronger foothold in the political landscape.

Between 1992 and 1993, Azeri forces captured 70 percent of the NKR, prompting Armenia to enter the fray. A 1994 ceasefire “froze” the conflict and established an Armenian-controlled buffer zone stretching a few kilometres east of the administrative border of the Soviet-era Nagorno-Kharabakh — but not before 30,000 lives had been lost and over a million people transformed into refugees.

Today, the two countries remain officially at war, with 150,000 NKR citizens living in a political limbo.

For those who survived the conflict, the precarious situation is a source of daily stress and anxiety, and though nearly 20 years have passed since the declaration of a ceasefire, citizens continue to live under the shadow of war.

“During the war I was teaching at a local gymnasium, and I saw 80 percent of my male students die in the fighting,” Grigoryan tells IPS.

“I do not want this to happen again –that’s why here, in our kindergarten, we do not speak about the war and we do not teach hatred to our pupils,” she says.

But though she does not speak of her memories, they are still fresh in her mind.

With vivid clarity she recalls the 1992 siege of Stepanakert, when Azeri Grad rocket launchers positioned in the hills in the nearby town of Shushi rained missiles down on NKR’s capital every day.

Civilians, quick to learn the rhythms of war, soon discovered that it took soldiers 18 minutes to reload a Grad battery and would use those intervals to move around the city, or steal brief moments of normalcy.

“I remember the mothers and fathers of the children you hear in the next room playing 18-minute-long football matches (during the siege),” Grigoryan says.

She is also active with the Public Diplomacy Institute, a local organisation that works to build bridges between Armenian NGOs and former Azeri inhabitants of NKR who were forced to flee to Azerbaijan in their tens of thousands during the war.

Lamenting that “two communities, Armenians and Azeris, who lived side by side for many years” are now wrenched apart, she hopes to build ties between them, through direct dialogue among people and peace activists on both sides.

Part of Grigoryan’s work entails “explaining” to her fellow countrymen that if they want peace, they must be prepared to make sacrifices, including territorial and political concessions to Azeris, like giving up the buffer zone beyond the NKR border and allowing Azeri refugees to return.

“We do not want to lose another generation to war,” she added, referring to the skirmishes that constantly erupt along the ceasefire line, and threats issued periodically from the government in Baku, which suggest that conflict is not far off.

Until 2009, Grigoryan’s cross-border diplomacy between NGOs and peace activists received some support form the international community, including a series of meetings in the Georgian capital, Tbilisi, and in Moscow, facilitated by the UK-based NGO International Alert.

But then everything slowed down, and the negotiations taking place under the auspices of the Minsk Group, a diplomatic initiative co-chaired by the U.S., Russia and France to mediate between the governments on either side of the Line of Contact, or ceasefire line, reached a stalemate.

Though it boasts everything from a parliament to a ministry of foreign affairs, located just a few paces away from Grigoryan’s kindergarten, NKR has not been recognised at the international level. 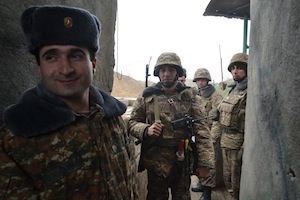 Soldiers in the trenches of the 1994 ceasefire line after the Armenian-Azeri war over Nagorno-Kharabakh. Credit: Enzo Mangini/IPS

Azerbaijan does not have any direct contact with NKR, leaving all negotiations to Armenia, which it has labeled the “occupying force” in the region.

NKR Foreign Minister Karen Mirzoyan says he is “ready to sit at the table with my Azeri colleagues, but the problem is that they are not ready to sit with a member of the NKR government.”

Mirzoyan was appointed several months ago, when the July 2012 elections gave the incumbent president Bako Saghosyan a second term, with 64 percent of the vote.

“We received a clear mandate from our citizens,” Mirzoyan tells IPS: “They want to be free and independent and I am ready to make any concession that is consequent with this goal.”

But what this means on a practical level is far from clear.

NKR authorities blame the Azeri government, led by President Ilham Aliyev, of running an anti-Armenian campaign at the international level and of silencing dissenting voices in its own country.

Experts point to numerous incidents that support this claim, including the case of journalist Eynulla Fatullayev, sentenced to eight and a half years in prison in Azerbaijan for his investigations on the Khojaly massacre, which cast doubt on the official Azeri version of the events. Faullayev was eventually pardoned in May 2011.

Experts like Richard Giragosian, head of the Regional Studies Centre, an independent think-tank for the southern Caucasus, believe there is a “desperate need for bold and creative political confidence building measures”, such as a universal withdrawal of Armenian troops from some stretches of the buffer zone.

“Armenia and Azerbaijan are stuck in a political stalemate that is hurting both countries,” he told IPS. “This could fuel instability in a region that is essential for the energy security of other countries, like Turkey, but also of Western Europe.”

Experts fear there could be severe ripple effects if the international community allows the issue to rot.

“Over the years, NKR’s independence has become an issue of national pride and national identity for Armenians and Azeris, thus making it all the more difficult to make concessions to the other side,” Giragosian says.

He believes strong players like Russia – which has sturdy relations with, and military bases in, both countries – ought to play a more prominent mediator role.