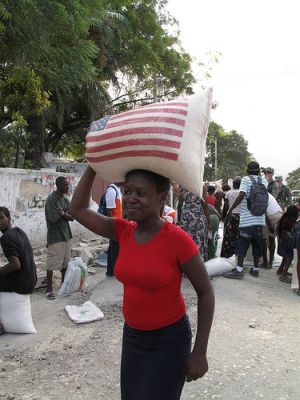 They point particularly to long-demanded changes to the structuring of the U.S. food aid programme, one of the largest in the world. Under the president’s new proposal, released Wednesday, U.S. food assistance would no longer be sourced from U.S. farmers and then sent abroad but would be purchased in local markets.

Proponents suggest the changes will save significant money for Washington while simultaneously helping to bolster local markets and economies in crisis-hit regions. Advocates say the food aid changes are in line with a broader reforms process under way at USAID.

“Oxfam was very critical of what USAID was doing [in 2008] – we questioned its very existence,” Paul O’Brien, vice-president of policy and advocacy at Oxfam America, a humanitarian group, said at a policy discussion here Thursday. “But we think what we’re seeing [now] is a quiet renaissance.”

Over the past half-decade, a new government initiative, known as USAID Forward, has worked to strengthen links between the agency and local institutions and to forge stronger partnerships between the United States and host countries. Supporters point to the development of Country Development Cooperation Strategies, detailed plans in which the host country lays out goals and unique needs to chart a path forward.

In a survey of 257 non-U.S. government officials in recipient countries, the report found that 83 percent saw the United States today as a better donor than it was five years ago.

According to the report, “Respondents reported that their interactions with the US have improved, allowing them more opportunities to decide how aid is spent and to work together towards mutually-shared results.”

While USAID Forward began as a direct response to criticisms spurred by the dwindling reputation and alleged mishandling of USAID programmes during the first decade of the 2000s, President Obama’s new budget proposal – which has not yet been approved by Congress – seems to draw on these successes in moving towards a more full-scale modernisation of the country’s foreign assistance model.

It would also shift 1.8 billion dollars from the U.S. Department of Agriculture to the State Department, using funds currently allocated for a process known as “monetisation” to instead go toward disaster- and crisis-related food assistance accounts.

Monetisation is the term given to the process by which Washington has traditionally given U.S.-grown grains to local organisations, which can then sell them for cash. Critics say this process is notably inefficient, a finding corroborated by a 2011 report by the Government Accountability Office (GAO), the U.S. Congress’s main investigative arm.

“The president’s 2014 budget includes reforms to food aid that will enable us to feed an estimated four million more hungry children every year with the same resources,” Rajiv Shah, the head of USAID, said in a major address Wednesday.

That optimism has been mirrored by NGOs and aid modernisation advocates.

“We are encouraged by the administration’s proposal, and believe that if it is implemented correctly and authorised by Congress that it could meet the principles that NGOs have called for,” Mark Lotwis, senior director of public policy at InterAction, a coalition of U.S.-based NGOs, told IPS.

“[Those calls] include keeping the core focus of food assistance on those who have acute hunger needs, increasing the number of people who are helped, and providing the administration with flexibility to meet the needs of people in the field.”

Some key food assistance changes in Obama’s budget request include the use of cash vouchers that broaden the reach of food assistance in disaster areas and the end of inefficient “monetisation”. This process, known for returning little more than half of invested funding, has become synonymous in the NGO community with inefficiency.

“The truth is that for years our practice in food assistance has lagged behind our knowledge,” Shah said Wednesday. “In the last decade, more than 30 different studies … have revealed the inefficiencies of the current system.”

A looming battle in Congress?

Some of these inefficiencies, though, are rooted in agricultural changes internationally, and implicating this sector in the needed reforms constitutes some unique political challenges for these proposals going forward.

For example, shortages in food, instead of the surpluses that once drove farmers to seek out foreign markets, have driven up the costs of doing business with recipient countries by some 200 percent in recent years. That increase has been primarily responsible for monetisation’s increasing inefficiencies and advocates’ calls for reform.

Ending monetisation, which necessarily entails shifting funds away from the Department of Agriculture, has already been met with some resistance in Congress, and is only expected to attract more on its way to a vote.

“American agriculture is one of the few U.S. business sectors to produce a trade surplus,” said a letter signed by 21 senators, including the chairmen of the Agriculture and Agricultural Appropriations Committee. “During this time of economic distress, we should maintain support for the areas of our economy that are growing.”

This conflict, though, is only one incarnation of a problem likely to be seen across different sectors, as groups affiliated with development assistance struggle to adjust their practices and business models to a transformative shift.

Even among NGOs, which have been largely supportive of the USAID reforms, the proposals are prompting a discussion about changing core practices in order to adapt.

“With [USAID Forward] we got the kind of leadership we need, but I think it’s now on us,” O’Brien from Oxfam said Thursday.