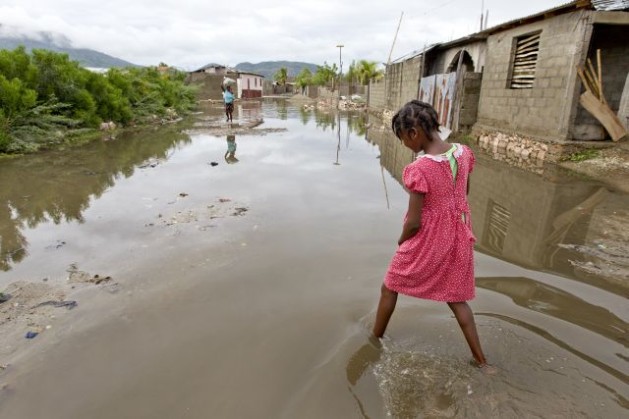 WASHINGTON, Apr 5 2013 (IPS) - Following the devastating 2010 earthquake in Haiti, more than a billion dollars of U.S. aid money has gone to that country with little transparency or accountability on how the money is being used, according to new data released by a watchdog group here.

A report by the Centre for Economic and Policy Research (CEPR), a Washington think tank, identifies significant problems with the delivery of U.S. aid to Haiti, citing a lack of audits and evaluations, particularly on the part of the USAID, the country’s main foreign aid arm.

There is a lot of resistance to change, especially when some of the largest recipients of contracts in Haiti are the for-profit development companies that have hired a lobbyist to push back on these reforms.

Since the 2010 earthquake, CEPR authors Jake Johnston and Alexander Main write, the few evaluations that have been carried out on U.S. aid to Haiti present “a troubling picture of the manner in which U.S. relief and reconstructions efforts have been conducted so far”.

They note, for instance, that contractors have hired far fewer Haitians than promised, while Haitian businesses have been largely excluded from U.S.-funded projects. In addition, goals have reportedly gone unmet, grantees have received inadequate supervision, and USAID had not conducted internal financial reviews of contractors.

Of the 1.15 billion dollars in U.S. contracts and grants awarded since the earthquake, Johnston and Main report that “over half went to the top 10 recipients of global USAID awards”, particularly a for-profit company called Chemonics International. In addition, less than one percent of USAID awards went directly to Haitian businesses or organisations.

“There has been some coalescing in the development community around changing the traditional aid model, which involves increasing local procurement, and working closer with host countries,” Johnston, a research associate with CEPR, told IPS.

“That’s part of the frame of this report, as we have not seen these kind of things happening from USAID. One of the main findings is just how little of the money, in the form of contracts and grants, have gone to Haitian organisations or Haitian companies.”

In addition, there is very little information available on the subcontracting done by the direct recipients of USAID awards. According to the report, of the 540 million dollars in contracts awarded by USAID, “only one of them, [to] MWH Americas, has reported any information on the use of subcontractors to the USASpending.gov database. Among grantees, only five have reported sub-grant data.”

“I am very much in agreement – we just don’t know where this money has gone. There is a real lack of transparency around this money,” Vijaya Ramachandran, a senior fellow at the Centre for Global Development (CGD), a non-profit Washington think tank, who has also written extensively on U.S. aid to Haiti, told IPS.

“I estimated that three billion dollars in U.S. public funds has been distributed to various NGOs and private contractors around the world and we just don’t know what has happened afterward. These groups are supposed to be doing quarterly reports for the U.S. government, and presumably they are doing that but we just don’t know, as they are not available to the public – we don’t even know if anyone is really reading them.”

She says no hard data is publicly available on how many people U.S. funding has helped in Haiti, and echoes the report’s terminology, calling the whole situation a “black box”.

“I think this kind of situation is worse when money has been distributed following a major disaster, like the earthquake in Haiti, where money is rounded up and sent quickly,” Ramachandran said.

“It may be that USAID does not have enough resources to make some of this information public, as the agency has been understaffed for a long time. That said, with technology today, there are many ways to make information public, so that’s becoming less and less of an excuse.”

Some have also argued that certain information should not be released given that countries are competing with each other for contracts. But Ramachandran rejects this on the basis that public money requires greater transparency regarding cost-effectiveness – on both sides.

“It is important that the citizens of Haiti be actually helped by these funds, and we can only know that if we can see how the money was spent,” she said. “So I think this information is important also to the recipient side.”

Johnston and Main also note that USAID has taken further steps to keep this information out of the public realm, having reportedly blocked various attempts at disclosure, including through Freedom of Information Act requests.

“Issues like accountability and transparency are incredibly important, especially to ensure the Haitian government is taking a leading role in the reconstruction of their country and that they know what is actually going on with all the different aid agencies that are operating there,” Johnston said.

“It’s also important that U.S. taxpayers, who are funding these operations, have faith they are being carried out efficiently.”

Johnston says he personally was blocked by USAID while doing research for the new report, in both the United States and in Haiti, where he says agency officials refused to meet with him during a recent month of research in the country. (USAID did not respond to requests for comment for this story.)

“It’s hard to say if this is totally unique to the Haiti experience … in other countries, USAID has gone further in terms of a reform agenda,” he continued.

“For instance, in 70 other countries, USAID missions have published reports stating that they have developed a new framework for publicising information as part of a reform agenda. But this has not happened in Haiti, nor is it planned to happen in the next couple years.”

Still, he says he hopes the new report can act as a “wake-up call”, potentially strengthening reformers within USAID.

“Of course, there is a lot of resistance to change, especially when some of the largest recipients of contracts in Haiti are the for-profit development companies that have hired a lobbyist to push back on these reforms,” Johnston said.

“Still, USAID’s stated goal is to conduct more local procurement, like awarding contracts and grants to local organisations and not always relying on the big development players. For those large companies, which receive a vast majority of their income from government contracts, they see these reforms as a threat to their business model. “