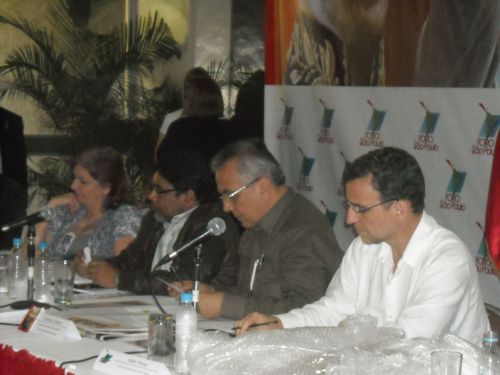 The São Paulo Forum expressed its support for Nicolás Maduro in the upcoming presidential elections in Venezuela. Credit: Raúl Limaco/IPS

CARACAS, Apr 2 2013 (IPS) - The São Paulo Forum, which groups leftist political parties and organisations of Latin America and the Caribbean, sees a victory by Venezuela’s acting President Nicolás Maduro in the Apr. 14 elections as key to the future of the left in the region, and to “containing the right”.

Maduro, the new leader of the United Socialist Party of Venezuela (PSUV), and Henrique Capriles, the candidate of the heterogeneous opposition coalition, will face off at the polls to win the six-year term to which the late Hugo Chávez (1954-2013) had been re-elected in October.

“For us the elections here are key, because an eventual defeat (of Chavismo) in Venezuela would mean a setback in the regional process of integration,” historian Valter Pomar, executive secretary of the Forum and a leader of Brazil’s governing Workers Party (PT), told IPS.

“It’s not the Brazilian or Argentine economy that would be affected in the case of a defeat (of Maduro) – which won’t happen – but the entire economy of Latin America, especially the weakest countries or the ones that are lagging the most in terms of industrial development,” Pomar said.

Parties that belong to the Forum, created in 1990 in São Paulo on the initiative of Brazil’s PT – in opposition at the time – currently govern Bolivia, Brazil, Cuba, Dominica, the Dominican Republic, Ecuador, El Salvador, Nicaragua, Peru, Uruguay and Venezuela.

Several of those countries belong to the Bolivarian Alliance for the Peoples of Our America (ALBA), Latin America’s alternative integration bloc founded by Venezuela and Cuba, or are beneficiaries of Venezuela’s Petrocaribe programme, which provides oil to 17 Caribbean and Central American nations under preferential payment conditions.

According to the Forum, Chávez’s initial election as president, in December 1998, marked the start of the rise to power of several of the group’s member parties. And since then, it says, none of them have been defeated in elections.

That does not count Chile’s Socialist Party, defeated by rightwing President Sebastián Piñera in 2010, because it was just one member of the centre-left Coalition of Parties for Democracy that governed since 1990.

The Forum working group, with 38 delegates from 27 parties in 18 countries, met Monday Apr. 1 in Caracas to pay homage to Chávez – who died of cancer on Mar. 5 – and express support for Maduro.

“This is an excellent show of support, which indicates to the popular movements of Latin America and the Caribbean that Venezuela is strategic and that the victory of Nicolás (Maduro) will also be a victory for the people,” Rodrigo Cabezas, a PSUV leader and Latin American Parliament lawmaker who hosted the gathering in Caracas, told IPS.

Maduro, meanwhile, said “this is the time of the greatest expansion of the struggles for the new independence of Latin America from U.S. hegemony and imperial domination. The road is just beginning in this new phase.”

The acting president and candidate, who joined delegates to the Forum in a visit to the mausoleum that holds Chávez’s remains in Caracas, expressed “special recognition of the Cuban revolution, as a forerunner to this Latin American and Caribbean process…It drove in the first peg, liberated the first territory, and generated the dynamic of resisting, fighting and winning,” he said.

“Yes, we are worried that the right is setting up an international operation, not only national operations, to deal us a blow. There is a counteroffensive by the right in the region, as seen in Honduras and Paraguay – the latter involving a coup by parliament,” Pomar said.

He was referring to the Jun. 28, 2009 coup that overthrew Honduran President Manuel Zelaya and the Jun. 22, 2012 toppling of Paraguayan President Fernando Lugo.

Nevertheless, “we see a situation of equilibrium. The right has failed to defeat us in the main countries where we govern, and we have not managed to get them out of power in Mexico, for example. But this relative equilibrium will not last forever,” Pomar said.

According to the Brazilian politician, “what could work in our favour is accelerating the changes in each country and deepening integration, a fundamental issue, because for many countries in the region it is impossible to forge ahead with the processes of change in an isolated manner. That’s why the presidential election in Venezuela is essential for us.”

This is reflected by the fact that the Forum has focused more on the vote in Venezuela than the Apr. 21 presidential elections in Paraguay, where the left is participating without a real chance of winning against the front-runners, who belong to the country’s traditional political forces: the Colorado and Liberal parties.

The Forum working group’s meeting also briefly discussed other international events, particularly the threats to global peace posed by the heated situation between South Korea and North Korea, the conflict in Syria and Iran’s nuclear programme.

Although the group agreed to protest what it called the provocation caused by U.S. military activities in South Korea, there were also voices in the meeting that complained that North Korea’s behaviour “facilitated” Washington’s alleged provocation.

In the debate on the situation in the Korean peninsula, the theory was set forth that the conflict there strengthens U.S. protagonism in the Asia-Pacific region to the detriment of China and its partners in the BRICS bloc – Brazil, Russia, India and South Africa – of emerging powers.

On the regional front, the meeting agreed that the most urgent situation involves the peace talks between the Colombian government and the FARC rebels, taking place in Havana.

As in nearly every Forum meeting, the Puerto Rican independence activists, this time through the words of Héctor Pesquera of the Hostosian National Independence Movement, insisted that the fight against the remnants of colonialism in Latin America not be forgotten, and called for the release on humanitarian grounds of Oscar López Rivera, who has spent nearly 32 years in maximum security prisons in the United States on charges of seditious conspiracy and armed robbery.