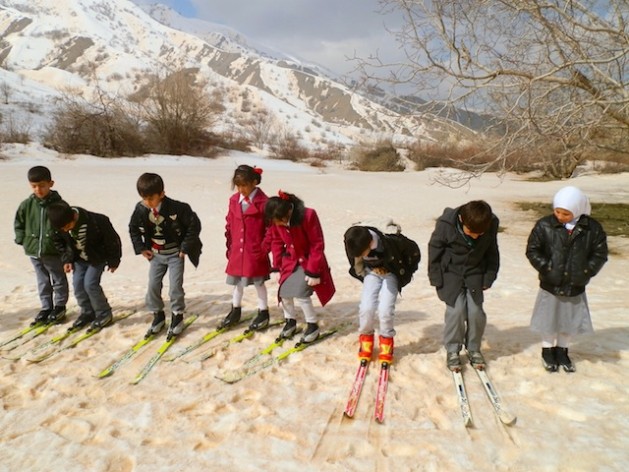 Kurds of all ages have been quick to take up skiing in the pristine mountains of Iraqi Kurdistan. Credit: Karlos Zurutuza/IPS

PENJWIN, Iraqi Kurdistan, Apr 17 2013 (IPS) - When 37-year-old Igor Urizar first happened upon the isolated mountain village of Penjwin, 300 kilometres northeast of Baghdad, he had a vision of this border-town — nestled in the pristine, snow-capped mountains of Iraqi Kurdistan — transformed into a haven for skiers.

Today, after four years of hard work, Urizar is the proud founder of the first ever ski school in Iraq, and can hardly contain his satisfaction.

"Locals were living on wood and cattle until they discovered that snow could also be economically profitable."
“It has been a long way to get to this point but I really think it was worth the effort,” the Basque ski instructor told IPS.

This past winter, until the early months of 2013, over 100 visitors flocked to this long forgotten region that has witnessed scores of conflicts — from the Gulf War in 1990-1991 to the U.S.-led invasion of Iraq in 2003 – and discovered something other than war: the pleasure of donning a pair of skis and gliding through the powdery snow.

But most visitors are happily oblivious to the challenges of establishing this recreational site in one of the world’s most volatile geopolitical regions.

“My first attempt was in 2009 in Baskale – a Kurdish village in Turkey about 1,000 kilometres east of Ankara,” Urizar said. “Snow conditions were perfect but the Turkish police so suspicious of a Westerner in a Kurdish village on the border with Iran that I was forced to leave the place a week after I arrived.”

Back in his hometown of Durango, 400 kilometres north of Madrid, Urizar contacted the Tigris Association, a non-profit organisation comprised of Basques and Kurds supporting development projects in Kurdish areas, which suggested that he try again in 2010 – only this time in Iraqi Kurdistan, where the local Kurdish population has enjoyed a high degree of autonomy since 1991.

Urizar discovered Penjwin on a hunt for the best possible skiing spots in the region. Luckily, he said, he had brought a few pairs of skis with him so was able to present his project to the local authorities, who finally gave him the green light later that year.

The initiative would not have been possible without the help of Falah Salah, a Kurdistan Regional Government (KRG) official and member of the Tigris Association.

“Our long-term goal is to import the successful “white week” model into Kurdistan,” Salah told IPS, referring to the annual 14-week period when over 5,000 schoolchildren from northern Spain’s Navarra region converge for skiing trips in the Pyrenees mountain range that forms the natural border between France and Spain.

Over the last 30 years this programme has become such an integral part of the economy of Spain’s Roncal Valley that many fear it will not be able to sustain itself without the ski industry. Innkeepers in the region told IPS that they earn 70 percent of their annual income during the winter months.

Salah believes the economically depressed Iraqi border region, where cattle rearing and farming have traditionally been the primary means of subsistence, could benefit greatly by promoting a similar scheme.

Skiers demand equipment rentals, they eat kebap (thinly-sliced grilled lamb served over pita bread) at local restaurants, and eventually spend the weekend in a village that has hitherto only served as a transit spot for refugees fleeing from either side of the Iran-Iraq border.

It was not difficult to cultivate a love of snow and winter sports among the local population here. Having grown up in the rocky mountains that are covered for several months out of the year in a thick white blanket, Kurds of almost all ages have been quick to participate in this playful activity, which Urizar labels “sustainable skiing”.

No ski lifts or other metallic eyesores ruin the beautiful landscape here. Instead, a simple municipal building, located close to a ski site, houses the equipment. Just outside, an unobtrusive track guides cross-country skiers through the shrubbery.

Dlosh Fatah, a physical education teacher at a school in the neighbouring Rania district, 328 kilometres northeast of Baghdad, won a pair of skis in Penjwin in 2012 and said the experience was so satisfying that she came back as an instructor a year later with a group who had received training in the Pyrenees during the first week of April.

Though her technique could do with some improvement, “for the time being, it’s more important to convey what I have learned to our children here” the 25-year-old told IPS, proudly producing a diploma issued by the Ski School of the Roncal Valley.

Chia Hassan is another future Kurdish ski instructor to whom Urizar will likely pass the baton in the winter of 2014.

“During our visit to the Pyrenees we have seen the development cross country skiing brought to a mountainous region similar to ours,” Hassan told IPS. “Like us, (locals) were living on wood and cattle until they discovered that snow could also be economically profitable,” the enthusiastic 31-year-old Kurd from Rania told IPS.

Penjwin’s ski centre also got a boost this year when local TV channels and newspapers picked up the story. The news has now piqued curiosity on the other side of the border, including an invitation from the Iranian Kurdish town of Sardasht, 430 kilometres west of Tehran, to share details of the project.

“We will definitely visit our friends in Sardasht but we must also struggle to take the project to other valleys in Iraqi Kurdistan,” said Urizar. He believes the best skiing spot is in the Qandil Mountains, an imposing watchtower peering down from a height of 3,000 metres, located at the exact spot where the borders of Turkey, Iraq and Iran meet.

“If negotiations between Ankara and the Kurds of Turkey stay on track we might be able be able to ski there one day,” Salah said hopefully.

For the time being, the mountain range remains a stronghold of the Kurdistan Workers Party (PKK), a guerrilla group engaged in an armed struggle for rights and recognition. The recent ceasefire between the guerrillas and the Turkish government has sparked optimism over a negotiated solution to a conflict that has dragged on for over three decades.

Locals can hardly wait for the moment when the sound of gliding skis replaces the soundtrack of bullets and shells in a location that Salah describes as “a paradise yet to be discovered”.