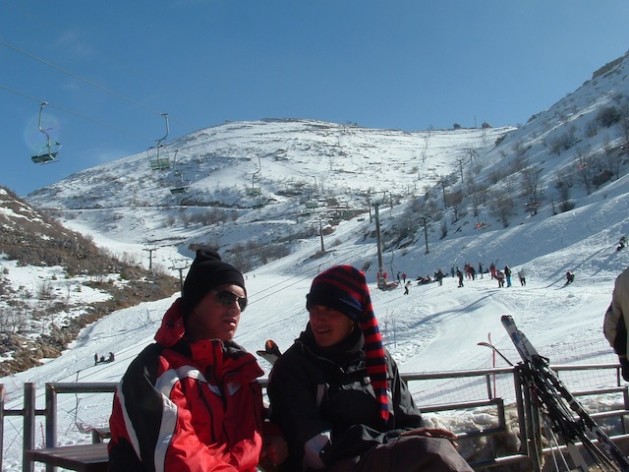 MOUNT HERMON, Israeli-occupied Golan Heights, Feb 13 2013 (IPS) - Unbending winds howl in the mountain, seldom carrying echoes of the two-year-old civil war closing in on Damascus just 35 kilometres away. But Israelis revel in immaculate pleasure. Albeit an internationally-recognised Syrian territory, the Israeli-controlled high ground is de facto their one and only ski resort.

“It’s the first time I ski,” says Ilana Marciano from the Mediterranean city Netanya as she laboriously extracts herself from the 60-centimetre layer of snow, “Amazing, just great!”

Mt. Hermon is all grainy snow this winter, an exotic fantasyland really for people more accustomed to the fun of sea and sun. Some 10,000 visitors flock to the ski resort on a regular day, according to the site management.

‘Jabel a-Sheikh’ as the mountain range is known in Arabic is hailed by Israelis as their country’s “eyes”. Perched high above the border triangle between Israel, Lebanon and Syria, Mt. Hermon provides a bird’s-eye view on large swaths of territory from its 2,236 metre height.

There the Israeli military maintains several observation and intelligence posts. On a clear day one can see Damascus.

To the northeast, Syrian military positions dominate the Lebanese Beqaa valley. At 2,814 metres, atop a buffer zone between Israeli and Syrian fortifications, is ‘Hermon hotel’, the world’s highest UN peacekeeping station.

The Golan Heights were conquered by Israel from Syria in the wake of the June 1967 Six Day War. They were briefly re-conquered by Syria six years later but reoccupied by Israel immediately thereafter.

During the Israeli invasion, some 100,000 Syrian Druze fled the Golan Heights. Now, alongside 20,000 Druze who remained on the steep slopes of Mt. Hermon in four towns and villages, 18,000 Israelis have made the Golan plateau their home in 32 settlements.

Beyond the 80-kilometre fence, the minefields and the military outposts scattered along the UN-monitored ceasefire line, beyond the 0.5 to 10 km wide buffer zone, Syrian villages and fortified positions are clearly visible.

In May 1974, Israel and Syria signed the Separation of Forces Agreement, which to this day is cautiously respected by both sides. For almost four decades, the strategic highland has remained frozen in status quo suspended between peace and war, like swinging chairlifts so to speak.

If it wasn’t for the border clash in June 2011 near the Druze town Majdal Shams in which some 20 Palestinian and Syrian protestors were shot while attempting to penetrate the Israeli-controlled area, or for a few errant mortar shells which landed on this side of the fence in November, the bloody civil war raging in nearby Syria would hardly be felt.

“There’s no tension; it’s peaceful here,” says Amit Rotem, a student from Jerusalem. “Until something happens, nothing happens, that’s the way I see it. Because we’re used to it – that’s how we live.”

Yet most recently, on Jan. 30, tension reached new peaks with an Israeli airstrike near a military research centre located in the vicinity of Damascus allegedly on a weapons convoy suspected of carrying SA-17 anti-aircraft missiles to the Shia militia Hezbollah in Lebanon.

At the heavily-protected ski resort, fun goes on as usual. “This incident didn’t even cross my mind,” notes a passing skier, “Maybe I’m too optimistic.”

In 1981, Israel passed a law which applies its “laws, jurisdiction and administration” to the Golan Heights, thereby in effect – if not formally – annexing the occupied territory. Some 10 percent of Syrian Golan Druze accepted Israeli citizenship but the law was never recognised by the international community.

During the 1990s, two Israeli prime ministers, Yitzhak Rabin and Ehud Barak, expressed their readiness to return Mt. Hermon and, by and large the Golan Heights, to Syria for peace.

“In retrospect, the mere thought that a withdrawal from here would be considered is whimsical. There’s nothing to return. And to whom would you return the Golan anyway,” says Ohana.

A law passed in 2010 stipulates that handover of any annexed territory – be it the Golan Heights, including Mt. Hermon, or occupied east Jerusalem – as part of future peace deals requires either a super-majority in parliament or a national referendum.

“Mt. Hermon will always be with us,” is the self-confident leitmotiv heard on the slopes.

From a 2,000-metre high perspective, nobody seems to worry that the strategic mountain, its natural reserve and ski resort of 14 pistes and five lifts arrayed on 45 kilometres of pristine slopes might one day be returned to Syria.

Risks of war, chances of peace with Syria – both seem from here virtually remote. (End)