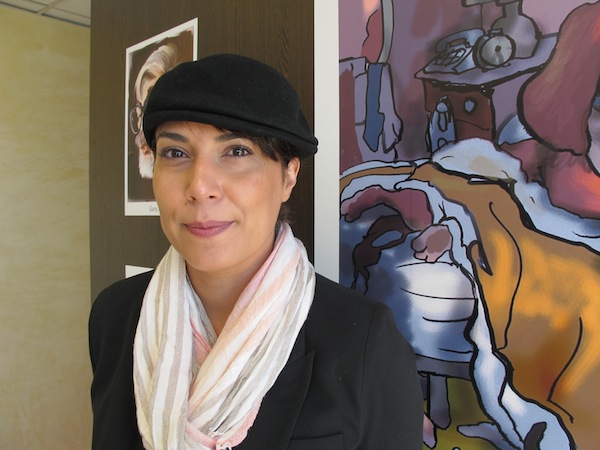 CANNES, May 20 2013 (IPS) - By now, most movie fans know that American actor Leonardo DiCaprio was in this southern French city for the annual Cannes Film Festival. But fewer people are aware that Willis from Tunis and Kichka of Israel were also here.

Willis is the pseudonym of Nadia Khiari, a cartoonist from Tunisia whose acerbic and ironic drawings are gaining an international following, mainly through social media and selected journals. Michel Kichka is the prominent Belgian-born, Israel-based cartoonist whose work is viewed eagerly in his adopted country.

In Cannes, they joined fellow cartoonists Plantu of France and Dilem of Algeria to highlight the work of Cartooning For Peace, a non-profit association that aims to foster dialogue, promote freedom of expression and recognise the journalistic work of cartoonists.

“We have Muslim cartoonists, Jewish cartoonists, Christian cartoonists – all with the idea of contributing to peace,” said Plantu, whose drawings have appeared for more than 40 years in the influential centre-left French newspaper Le Monde.

Plantu and Kofi Annan, former secretary-general of the United Nations, founded Cartooning For Peace in 2006 in the wake of protests and riots around the world sparked by Danish cartoons depicting the Prophet Mohammad.

The group now comprises more than 100 cartoonists representing 40 nationalities and all the world’s major religions.

During the 12-day film festival, which ends May 26, members’ works are on exhibition in the huge hall where official film screenings and press conferences with the “stars” take place.

Alongside the glitter and glamour, Cannes’ organisers said they wanted to draw attention to threats against freedom of expression. They’re also holding an auction of original cartoons during the festival to fund Cartooning For Peace’s efforts, which include providing protection and legal assistance to cartoonists.

"We don't need a political party to be our intermediary with God."
-- Nadia Khiari

Standing beside one of her drawings, Khiari (Willis From Tunis) told IPS she found the atmosphere “frenetic”, but she said that the support of Cannes, Cartoonists For Peace and the people who write to her made her feel less isolated.

Connecting with others “gives me energy and the desire to go on,” she said. “If I continue doing this, it’s for all the people who find my cartoons interesting and who send me comments. I receive lots of messages of encouragement, and that helps me because I feel less alone.”

Willis is aware of the dangers that cartoonists face in certain countries. In 2011, Syrian cartoonist Ali Ferzat was badly beaten by security forces, who symbolically tried to destroy his hands.

Cartooning For Peace launched a campaign to get him out of Syria and to hospital, where plastic surgery saved his fingers, according to Alice Toulemonde, a spokesperson for the group. Farzat, whose cartoons criticised the regime of President Bashar al-Assad, is now able to draw again.

More recently, the group and Amnesty International have highlighted the case of Venezuelan cartoonist Rayma Suprani, who has been receiving threats related to her work, as she is not a fan of the late Venezuelan president Hugo Chavez.

For Tunisia’s Khiari, it was a major political event that pushed her towards cartooning. An artist and art teacher, she launched Willis From Tunis during the “Jasmine Revolution” that led to the Arab Spring. She took her pseudonym from the name of her cat, Willis, who was born during the last speech of former Tunisian president Zine El Abidine Ben Ali.

“The president was there promising press freedom and a host of other things, and the absurdity of the speech inspired me to do some cartoons,” she recalled of the beginning in 2011. “Of course I didn’t know then that this would be his last speech.”

One of her cartoons on display in Cannes shows a news reader in dark glasses (a reference to the film “Men In Black”) telling viewers that after the commercial break they will forget about “23 years of dictatorship, the revolution, martyrs and the quest for liberty and solidarity” but that they will continue to “be miserable”.

“I feel that I’m one of many who want the same things – happiness, employment, freedom. It’s not complicated,” she added. “All Tunisians are interested in politics. We are 11 million politicians. I express myself through cartoons and humour. For others it’s through blogging, articles, photos and other means. It’s visceral.”

Khiari said she has a special interest in protecting women’s rights, which are constantly under threat in Tunisia. She drew cartoons about a proposal to add to the constitution that “women are complementary” to men. The proposal was withdrawn after women took to the streets to protest.

“We raised our voices to say ‘I’m not complementary to anyone, I’m my own individual being’,” Khiari said. “We now know that if we react, go out and protest, there are means to change things. Personally, I’m fighting for freedom of expression and the rights of women.”

In her cartoons, she also shows concern for the direction the country has taken since Ben Ali was forced to flee.

“The slogan of the revolution was dignity, liberty and employment. That’s what we wanted,” she told IPS. “The issue wasn’t morality or religion. Each person’s spirituality is a personal matter, but politicians are spending time turning attention from the real issues, which include the economy and employment, and they’re talking about morality.”

“Meanwhile, poverty and joblessness still exist and nothing is being solved. We don’t need a political party to be our intermediary with God.”

Encouraging debate through humour is also a tool for Kichka, Israel’s leading political cartoonist, who believes that artists have to be true to themselves.

“As a cartoonist, I have to take sides,” he told IPS. “When I see certain things happening in the world, I feel I have a commitment. I am not drawing for my own pleasure.”

“You have to take into consideration that you can be badly misunderstood, but that doesn’t mean you can’t express yourself, especially in a free country,” he added. “A sense of humour is essential for living.”