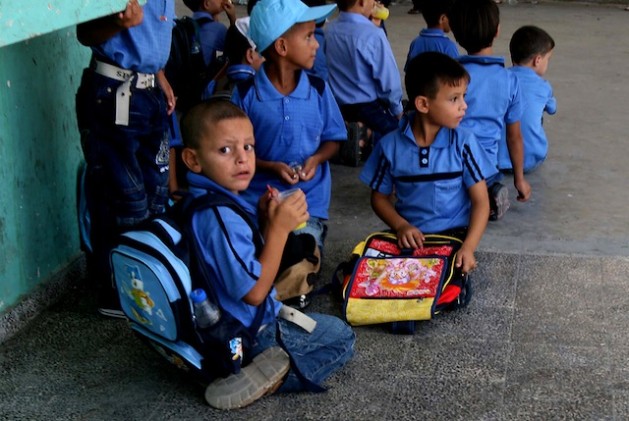 RAMALLAH, Occupied West Bank, May 3 2013 (IPS) - The Islamist resistance group Hamas, which controls the Gaza Strip, is being accused by its Palestinian Authority (PA) rivals in the West Bank of Talibanising Gaza and turning the coastal territory into a new Muslim Brotherhood neighbourhood.

Earlier in the year Hamas launched a “virtue campaign” aimed at spreading Islamic Sharia and fighting against “Western dress and behavior.”

Following a recent law passed by Hamas, when the new school year begins from September this year, it will now be illegal for male school teachers to teach Palestinian girls in Gaza’s schools. Furthermore, girls and boys from the age of nine upwards will be forcibly segregated throughout the Gaza Strip, including those in private and Christian schools where co-education exists to a certain degree.

The law will affect the seven percent of schools in Gaza that are private, including Christian schools. They will need to finance the expansion of their buildings to be able to hold special classes for each gender. Gaza has 690 schools with 466,000 students for a population of 1.7 million.

“This is ridiculous. What is wrong with boys and girls learning together?"

Another article of the law regulates relations between Palestinian educational institutions and Israel, by banning schools from receiving aid meant to encourage or promote the normalisation of relations with Israel.

This latest crackdown on civil liberties follows earlier campaigns which have seen women banned from riding on the back of motorcycles, a common form of transport in the territory where fuel is scarce. Women have also been banned from smoking water pipes in public, and couples on the streets have been subjected to interrogations by Hamas security members.

Male hair stylists are forbidden from styling women’s hair while female runners were banned from taking part in a marathon organised by the UN Relief and Works Agency (UNRWA) in Gaza, leading  UNRWA to cancel the event.  The marathon went ahead in the West Bank, attracting international competitors and Palestinian women.

In the West Bank there is no law segregating boys and girls in early school. However, apart from some schools including private and Christian schools, there is a general segregation of the sexes in high school.

But choice is an issue for many Palestinians, and Hamas legislation on “how to be a good Muslim” is seen as enforcement of the Hamas political agenda.

“This is ridiculous. What is wrong with boys and girls learning together? As a Muslim and a parent I want the choice as to whether I send my children to a mixed school or a gender segregated one,” says Rana Atta from the Women’s Affairs Technical Committee (WATC) in Ramallah in the West Bank.

Atta, who wears a head scarf, says that the new legislation introduced by the Hamas authorities not only violates human rights but is contrary to the spirit of education which should be promoting gender equality and an inclusive society representative of all.

“It’s illogical that male teachers will now be forbidden from teaching girls. Just as boys should be exposed to female teachers as an integral part of our society, so should girls be exposed to male teachers. I seriously wonder about the educational background of the people who are introducing these new laws in Gaza,” Atta tells IPS.

In a press statement, the Gaza Centre for Womens’ Legal Research and Consulting condemned the decision as “gender-based discrimination.”

When Hamas took over full control of the Gaza Strip it promised to respect the civil liberties of Palestinians, a promise that the Islamic movement has increasingly broken with growing militancy.

“Hamas is slowly engaging in a process of the Islamisation of Gaza. A process which is not constitutional on the one hand and neither is it popular with Gazans on the other,” says Dr Samir Awad, a political analyst from Birzeit University, near Ramallah.

“They have gone so far as to threaten the Palestinian contestant of Arab Idol with legal action and accusing him of engaging in illegal and immoral behaviour,” Awad tells IPS.

“Hamas’s draconian legislation is unwarranted, neither by the constitution nor the Palestinian population. These latest developments are further entrenching the political divide between the West Bank and Gaza.

“Those schools in Gaza were there long before Hamas and will be there long after Hamas is no longer around. Palestinians have stated repeatedly that they want self-determination and that applies to Gazans too.”