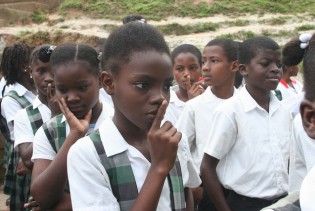 By Tharanga Yakupitiyage
While rates have decreased, school violence and bullying is still a major global issue, contributing to lasting impacts on youth, a United Nations agency found.

The U.S. government has released landmark new guidelines aimed at tackling overreliance on punitive disciplinary measures within the national school system, with students being expelled or even referred to law enforcement for minor infractions.

By Zofeen Ebrahim and Farooq Ahmed
Balancing her school bag on one shoulder and holding her three-year-old son by the hand, Farida Haque (19) ignores her in-laws’ complaints and her husband’s frown as she heads each morning for the tiny school in her remote village of Allah Bachayo, located in the Thatta district of Pakistan’s Sindh Province.
ADVERTISEMENT ADVERTISEMENT