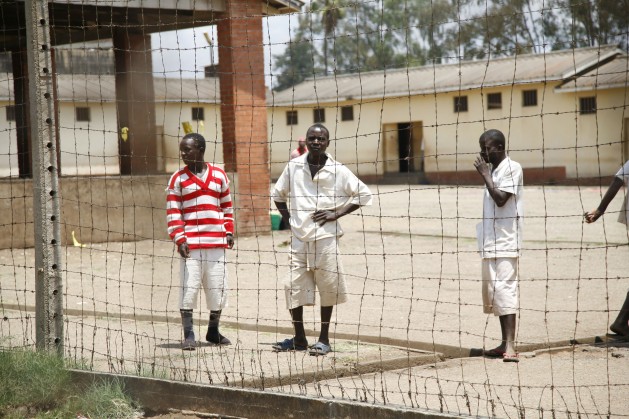 Distributing condoms in prisons and schools has set off a heated debate, rendering the fight against HIV/AIDS a challenge ahead of this year's U.N. deadline for nations to halt its spread. Credit: Jeffrey Moyo/ IPS

HARARE, Mar 28 2015 (IPS) - Tatenda Chivata, a 16-year old from Zimbabwe’s Mutoko rural district, was suspended from school for an entire three-month academic term after he was found with a used condom stashed in his schoolbag.

Regerai Chigodora, a 34-year-old prisoner at a jail in Harare, had his 36-year sentence stretched to 45 years after he was caught with used condoms in prison early this year.

With restrictions blocking the distribution of condoms in schools and prisons in Africa, health experts say the continent’s opportunity to halt the spread of HIV/AIDS in line with the U.N. Millennium Development Goals may be squandered,

“It will be hard for Africa to win the war against HIV/AIDS if certain groups of people like students and prisoners are being skipped from preventive measures,” Tamasha Nyerere, an independent HIV/AIDS counsellor based in Dar es Salaam, the Tanzanian capital, told IPS.

Human rights activists in Zimbabwe say more cases of youths like Chivata and prisoners like Chigodora may be going unreported in countries where condom use in jails and schools is anathema.

With restrictions blocking the distribution of condoms in schools and prisons in Africa, health experts say the continent’s opportunity to halt the spread of HIV/AIDS in line with the U.N. Millennium Development Goals may be squandered.

“It’s indeed disturbing how hard we have worked as Africa to fight against the spread of HIV/AIDS yet we have not been so pragmatic in our bid to institute preventive measures in schools and jails, where most of our African governments have vehemently refused to allow condoms to be distributed with the common excuse that they promote homosexuality in jails and sexual immorality in schools,” Elvis Chuma, a gay activist in Zimbabwe’s capital Harare, told IPS.

Zimbabwean prisoner Chigodora agreed, telling IPS that “whether or not authorities here like it, homosexuality is rife in jails and even if we may smuggle in condoms to use secretly, if you get caught like in my case, you will be in for serious trouble.”

Schoolchildren in Africa like Zimbabwe’s Chivata have to contend with secret use of condoms in school. Their only crime is that they are underage, said Chivata.

“I’m serving a suspension from school because I was caught with a condom I used during sex with my girlfriend, but the same teachers teach us about use of protection if we get tempted to engage in sex. Now I’m wondering if I was wrong using a condom. Perhaps I could have gone undetected if I had opted to have unprotected sex,” he told IPS.

Under Zimbabwe’s Legal Age of Majority Act, any Zimbabwean under the age of 18 years is a minor, while a person between the age of 16 years and 18 years is defined as a young person under the Children’s Protection and Adoption Act.

Sodomy is also a punishable offence in Zimbabwe, which rights activists say, makes it difficult for this Southern African nation and other African nations to distribute condoms in prisons.

“African countries like Zimbabwe are being cornered by their own laws which bar them from dishing out condoms to prisoners and school children,” Tonderai Zivhu, chairperson of the Open Association of People Living with HIV/AIDS, a lobby group in Masvingo, Zimbabwe’s oldest town, told IPS.

South Africa and Namibia may be the only two out of Africa’s 54 countries that have adopted HIV/AIDS preventive measures in schools and jails.

In Namibia, the country’s policy on HIV/AIDS states that all convicted prisoners awaiting trial and inmates are entitled to have access to the same HIV-related prevention information, education, voluntary counselling and testing, means of prevention, treatment, care and support as is available to the general population.

Other African countries, however, seem unclear about their position on condoms use in jails and schools.

Last year, the government of Rwanda confirmed the prevalence of homosexuality in prisons, but was non-committal on whether or not it would start distributing condoms in its correctional facilities.

This year, Zimbabwe’s Primary and Secondary Education Minister Lazarus Dokora told parliament that parents were free to pack condoms for their children in their schoolbags, but that the government would not allow them to be openly distributed at schools.

“We must say children are in school to learn and be initiated for certain life skills, and when it comes to condoms, you are the guardian of your child and you must have an intimate connection with your child so that when you pack their school luggage and prepare their books you can also pack condoms,” Dokora had said.

This laissez-faire approach has incensed certain African indigenous pro-culture activists who have been vocal in their calls against condom distribution in prisons and schools.

“Distributing condoms in prisons and in schools will render African governments accomplices to the commission of the crime of sodomy and sexual immorality among school-going children, which is against our cultural values and norms as Africans,” Bupe Mwansa, head of the Culture and Traditions Conservation Association in Zambia, an indigenous pro-culture lobby group, told IPS.

According to the World Health Organisation (WHO), an estimated 3.2 million children lived with HIV at the end of 2013, mostly in sub-Saharan Africa, with approximately 145,000 HIV-positive children from Zimbabwe.

The Zimbabwe National Statistics Agency (ZimStat) states that Zimbabwe has a total of 18,000 prisoners, with 28 percent of these living with HIV and AIDS.

In South Africa, an estimated 41.4 percent of that country’s 166,267 prisoners are also living with HIV/AIDS, based on statistics from the Ministry of Health there, despite the country being the only African nation that does not outlaw homosexuality.

Although other African governments admit there are sexual activities going on in schools and prisons, they remain hesitant to allow condom distribution in them.

But for human rights doctors like Nomalanga Zwane in Johannesburg, fighting HIV/AIDS in schools and jails requires drastic measures.

“If school kids are left on their own with the belief that they are not engaging in sex because they are barred by being underage, we are fighting a losing battle against HIV/AIDS because the same school pupils will spread the disease even outside school while prison inmates with no access to condoms will also one day come out of jail and further spread the disease,” Zwane told IPS.

Zimbabwe’s ex-convicts like 37-year-old Jimson Gwatidzo, now an ardent campaigner for the distribution of condoms in jails after he contracted HIV in jail, sees no credible reason why some African governments forbid condoms in prisons “in the face of rampant rape-induced HIV/AIDS infections behind prison walls.”

“It is time for governments across Africa to scrap anti-sodomy laws to allow for the distribution of condoms in prisons and be able to fight HIV/AIDS spread in jails without legal barriers,” Gwatidzo told IPS.