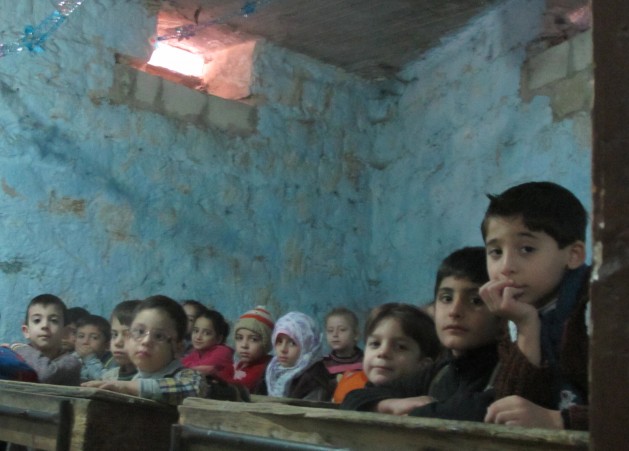 ALEPPO, Nov 6 2014 (IPS) - Winter has not yet hit this nearly besieged city, but children are already attending classes in winter coats and stocking hats.

Cold, damp underground education facilities are less exposed to regime barrel bombs and airstrikes but necessitate greater bundling to prevent common seasonal viruses from taking hold in a city from which most doctors have fled or been killed.

Only one perilous route leads out of the city and northwards to the Turkish border and better medical care, if required.

A few of the children in the co-ed primary school seem shell-shocked, but many smile and laugh readily on the crowded wooden benches stuffed into the cramped, cold spaces.

On the way to an underground school IPS visited in late October, the children must necessarily pass by shop fronts blown out by airstrikes, a few remaining signs advertising what used to be clothing, hairdressers’ or wedding apparel shops with the ‘idolatrous’ images spray-painted black by the Islamic State (IS) when they briefly controlled the area, before being pushed out by rebel groups.

The jihadist group is still battling to retake terrain in the area, with the closest frontline against them being in Marea, an estimated 30 kilometres away from opposition-held areas of eastern Aleppo.

They must also witness the destruction wrought by the regime, which is trying to impose a total siege on opposition areas and which would need to take only a few kilometres more of terrain to do so.

Even if they only live a block away, the children are forced to walk by buildings entirely defaced by barrel bombs, floors hanging down precariously above the heads of fruit, vegetable and sweets street vendors. A pink toilet and part of a couch are still visibly wedged between the upper, mutilated and dangling levels of one such building on their way.

A few of the children in the co-ed primary school seem shell-shocked, but many smile and laugh readily on the crowded wooden benches stuffed into the cramped, cold spaces. Two boys at the front of one of the rooms sway back and forth with their arms around each other’s shoulders, singing boisterously.

Some of the rough walls have been painted sky blue or festooned with holiday-type decorations to ‘’brighten the children’s spirits’’, one of teachers says. A few comic-strip posters have been pasted in the corridor. 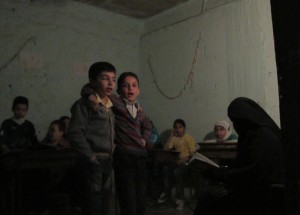 The classes run from 9 in the morning to 1 in the afternoon during the week, one of the instructors – Zakra, a former fifth-year university student in engineering – told IPS.

Zakra, who now teaches mathematics, English and science at the school, said that she gets paid about 50 dollars a month. All of the school’s 15 teachers are women wearing all-covering black garments. Some cover their faces as well, some do not. IPS was told not to photograph them in any case, because many still have family members in regime areas.

‘’The school opened last year,’’ Zakra said, ‘’but then stopped between October 2013 and July 2014, as the barrel-bombing campaign made it too dangerous for parents to send their children to school,’’ even to underground ones.

The young teacher said that she plans on leaving at some point to continue her studies in Turkey but was not sure when, primarily due to economic reasons.

Older students are mostly left to their own devices, because this school and others like it only provide for those ages 6 to 13.

The head of the education department of the Aleppo City Council – who goes by the name of Mahmoud Al-Qudsi – told IPS that some 115 schools were still operating in the area, but that most of them were former ground-level flats, basements or other structures.

Only about 20 original school buildings were still operating, he said, from some 750 in the area prior to the uprising.

Syrian government forces have targeted educational and medical facilities in opposition areas throughout the conflict, and efforts are made to keep the locations secret.

Those preparing for the baccalaureate – the Syrian secondary school diploma – study at home, he said. They then come to centres on established dates to actually take the exams in late June and early July. Word is spread of where they will be held via the Aleppo Today television channel, which broadcasts out of Gaziantep, and posters are put up around the city to announce the times and places.

Most of the curriculum remains that approved by the regime, but ‘nationalistic’ parts praising the Assad family have been cut and religion classes now teach that ‘’fighting against the Assad regime is a religious duty.’’

‘’We also want to change the curricula, but we can’t right now. We want it to be a Syrian-chosen one – one designed and wanted by all Syrians – but we can’t do that now, given the situation,’’ said Qudsi, ‘’and we obviously don’t have the money to print new books.’’

Most of the low salaries the teachers receive are necessarily funded by various international and private associations because the city council just does not have the funds, he noted.

The council, ‘’was only able to pay the equivalent of 70 dollars each for the entire academic year but the teachers were happy about it nonetheless, since it shows that we appreciate what they are doing.’’

Qudsi was also adamant that even the most fundamentalist parents had not interfered with their teaching.  ‘’We are all in this together. Their children attend our schools, too.’’

The barrel bombs stopped entirely for a number of days earlier this autumn after rebel forces closed in on the Aleppo air defence factories where the crude bombs made of scrap metal and explosives are assembled by regime forces. The bombing has since resumed following regime gains.

On arriving at the scene of one such attack in late October, IPS saw a body pulled from the rubble by the civil defence forces before they rushed with flashlights around the block to get to the other side of the collapsed building, where three young children had been trapped underneath the rubble. All were later found dead.

Families were crowded on the steps outside of other buildings down the street, and flashlight beams illuminated the faces of clutches of frightened children, an adult or two nearby in the dust raised by the concrete slabs brought down in the impact.

The schools at least give the children a chance to focus on something other than the destruction and death surrounding them, Qudsi told IPS, and ‘’are the only chance of Syria having any future at all.’