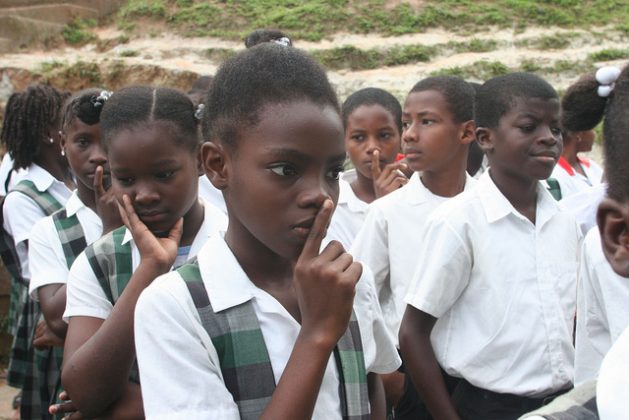 During the 2019 Education World Forum, taking place in the United Kingdom, the U.N. Educational, Scientific, and Cultural Organisation (UNESCO) released a report analysing global trends on school violence and bullying.

“All children and young people have the right to safe, inclusive and effective learning environments,” said UNESCO’s Assistant Director-General for Education Stefania Giannini at the launch of the report.

The report found that almost one in three students have been bullied by their peers at school at least once in the last month, and a similar proportion are affected by physical violence.

While physical appearance is the most frequent reason for bullying, students perceived as gender non-conforming face the highest risk of school violence.

In Australia, 60-70 percent of lesbian, gay, bisexual and transgender (LGBT) youth reported experiencing bullying due to their sexual orientation or gender identity. In Thailand, the prevalence of bullying among LGBT youth was 55 percent.

Such bullying increases the likelihood of suicide. Across 96 countries, over 23 percent of bullied children reported that they seriously considered attempting suicide, compared with 12 percent of those who were not bullied.

In 2010, Tyler Clementi’s suicide captured national attention to the issue of cyberbullying and the struggles LGBT youth face. He faced online abuse after being publicly outed by his college roommate.

Last year, a 9-year-old boy from Colorado committed suicide after coming out as gay to his classmates.

“School violence and bullying can be devastating for the victims,” said Giannini, adding that bullying also impacts students’ educational outcomes.

“An atmosphere of anxiety, fear and insecurity is incompatible with learning and unsafe learning environments can, therefore, undermine the quality of education for all learners,” she said.

According to UNESCO, children who are frequently bullied are almost three times more likely to report feeling like an outsider at school and are nearly twice as likely to ship school more often.

Aija Mayrock recounted this feeling in a report by the Office of the U.N. Special Representative of the Secretary General (SRSG) on Violence Against Children, stating: “I was eight years old the first time that I was bullied. One of my classmates said to me, ‘No one likes you. No one will ever like you.’ From that day forth, I endured bullying every single day for eight years. I was verbally, physically, and cyber bullied. I believed my classmates. Their words started to become the constitution I lived by. I stopped speaking in school. I kept my head down and my eyes on the ground at all times. In a way, I began to give up.”

UNESCO found that children who are bullied score lower in tests than their non-bullied peers, and it even affect continued engagement in education.

According to the Programme for International Students Assessment, 45 percent of students who were frequently bullied wanted to leave formal education after completing secondary school.

“Being protected from bullying is a fundamental human right,” said the SRSG on Violence Against Children Marta Santos Pais upon the launch of the Secretary-General’s report on the issue in 2018.

Giannini highlighted the importance of addressing school violence and bullying in order to achieve the Sustainable Development Goals (SDGs) including SDG 4 which aims to ensure inclusive and equitable quality education and promote lifelong opportunities for all.

Monitoring progress and collecting data on prevalence and trends in school violence as well as responses to the issue is therefore essential, she added.

Strong political leadership and a robust legal and policy framework are also necessary to address violence against children.

In Jamaica, the Prime Minister, who previously served as the Minister for Education, worked to ban corporal punishment in schools and promoted the use of positive discipline, an approach to make life in school a positive experience for all learners.

In the United States, some states including New York and Colorado have adopted anti-bullying laws with specific protections for LGBT teens.

According to GLSEN, only 18 out of 50 states have such laws.

Elsewhere, some civil society organisations are taking matters into their own hands.

In Chile, the Selenna Foundation established Latin America’s first school for transgender children as a way to protect students from bullying and discrimination. Many of the students were those who often skipped classes or failed to complete studies due to their experiences.

“School-related violence in all its forms is an infringement of children’s and adolescents’ rights to education and to health and well-being. No country can achieve inclusive and equitable quality education for all if learners experience violence and bullying in school,” Giannini said.