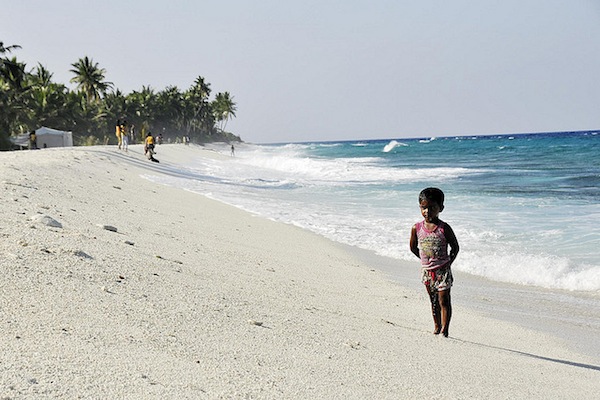 In the Maldives, a nation of small islands threatened by rising sea levels, the topic of climate change is a controversial one. Credit: Nattu/CC by 2.0

VENICE, Jun 5 2013 (IPS) - On the quay leading to the Arsenale exhibition complex, a block of ice melts in a rare blast of spring warmth. Elsewhere in the city, coconuts bob on the choppy waters of the canals during the opening week of the 55th Venice Biennale.

The ice and the coconuts were both works of art belonging to the Maldives in its first-ever participation in the Biennale. One, by Stefano Cagol, referenced melting ice sheets, which contribute to rising sea levels that may threaten the existence of the fragile island nation.

The second, by the Wooloo group, echoes a disaster that has already happened – the Indian Ocean tsunami of 2004, after which the sea was littered with bunches of coconuts.

The Maldives’ first national pavilion at the Venice Biennale, the world famous art show that attracts the rich, the famous and other art aficionados to this Italian lagoon city every two years, is all about climate change and the threat posed by rising sea levels to this low-lying chain of islands in the Indian Ocean.

This ecological focus, however, is also part of a Maldivian political controversy.

The pavilion was once the initiative of former president Mohamed Nasheed as a way to focus attention on the issue. It was almost abandoned after he resigned under hotly contested circumstances in February 2012.

The new government, with plenty of other issues demanding its attention, lost interest and allowed a joint Arab-European collective of curators, calling themselves Chamber of Public Secrets, to take over the pavilion and mount a show under the banner Portable Nation.

“They did not care. They did not mind. They don’t believe in the power of art to affect anything anyway,” Maren Richter, an Austrian associate curator, said of the current government’s attitude.

She called the lack of interest fortunate because political attitudes in the Maldives on the issue of climate change have changed dramatically.

“The new government even denies the problem and says that Nasheed was a liar. They say, ‘He built an airport and resorts, why would he do that if sea levels are rising?'” said Richter.

That accusation is voiced in the documentary “Maldives To Be or Not”, by Lebanese curator and artist Khaled Ramadan. It explores Western preconceived notions about the Maldives and its ecology, said Ramadan, who visited the islands as a citizen of the Arab world who wanted to learn about a place with shared identities.

T. C. Karthikheyan, an observer of the political and the ecological situation of the Maldives and an associate fellow at India’s National Maritime Foundation in New Delhi, confirmed that the current government is spreading the idea that Nasheed has been exaggerating the threat of rising sea levels.

The former president, who earned a degree in Maritime Studies in Liverpool before becoming a political activist, won elections in 2008, ending 30 years of authoritarian rule in the Muslim country. He immediately began making climate change a focus. In 2009, he famously held a cabinet session under water.

But Nasheed stepped down after widespread protests in February 2012, claiming that he had been forced out in a coup, an accusation that a Maldives inquiry called unfounded. He is now gearing up to run for reelection in September and win back the presidency from Mohammed Waheed Hassan.

The current government’s accusations against Nasheed can be interpreted as a attempt to discredit him while simultaneously sidestepping accusations that it has done too little on the issue of climate change since coming to power.

“They are mostly involved in politics and image building,” said Karthikheyan. “They have not done anything considerable in the previous year on the issue of climate change.”

In any case, the environment is not expected to play a major role in upcoming elections. Voters in the Maldives have other issues to worry about, such as the economy, democracy, human rights and the rise of Islamism, said Karthikheyan.

“The climate change aspect is not very prominent in the local campaign. When it comes to international attention then it is prominent,” he said.

The pavilion in Venice has helped the Maldives garner some of the attention that Nasheed sought for the issue of climate change, with many works there directly referencing the issue.

Outside the pavilion, an installation by Swiss artist Greg Niemeyer turns the various sea levels in the Maldives, Iceland, Venice and the Antarctic into sound.

Internet users in the Maldives can click a button on a website that will release the sound of a large tidal wave from the installation in Venice, a creation that is bound to attract notice in a city that itself is at risk from rising sea levels.

The 55th Venice Biennale was launched on 29 May and will be open to visitors until 24 November.