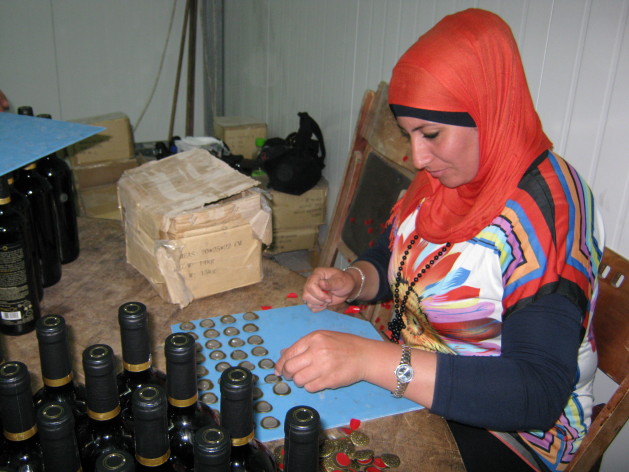 A Palestinian worker at a winery owned by a settler in the West Bank. Credit: Pierre Klochendler/IPS.

PSAGOT, Occupied West Bank, Jun 29 2013 (IPS) - So much about wine is a boast over its land of origin. The label reads, ‘Product of Israel’, but don’t let that deceive you. This particular Cabernet Sauvignon is produced in Israeli-occupied territory.

Joining other European Union countries, Germany, Israel’s closest European ally, is now edging toward issuing explicit guidelines on labelling of products made in settlements, thus sanctioning the ‘Made in Israel’ label only for goods manufactured within the 1967 borders.

Ya’akov Berg founded the Psagot boutique winery in 2009. He planted his first vineyard in 2003 while building his dream house on the foothills of the settlement Psagot, just a stone’s throw away from the Palestinian city Ramallah.

“It’s never been Palestine. It’s our fathers’ land,” Berg declares, overseeing the labelling. He overlooks the fact that the West Bank, occupied by Israel since 1967, is now recognised internationally as part of future Palestine and that it’s the settlements that are illegal under international law.

So long as checkpoints, watchtowers and walls block out the view from the Palestinian hub and restrict the movement of Palestinian labour and goods, settlers like Berg can produce their wine, waging with their vineyards a quiet battle for supremacy on both public and private land.

Occupied West Bank itself grows to be wine country – from grapes of wrath.

At least 29 known wineries now operate in settlements around the West Bank. Within ten years, Berg’s vineyard expanded from 12 to 62 acres of pristine land.

“Proud of the deep Jewish roots to the land” into which his vine sends its roots, Berg likes to show his visitors a 2000-year-old wine press “from the Second Temple period” hidden in a cave which he says he discovered beneath his house.

His elite Cabernet Sauvignon matures in oak barriques stored in the cave. “It’s very important to know the wine’s origin, quality, uniqueness,” says Berg. “Everything comes from the land.”

But precisely how to label the produce of the land is becoming a forbidding issue. A ‘Forbidden fruit’ warning label now threatens to stick to his wine. EU foreign ministers are likely to consider an agreement on labelling settlers goods during their regular meeting.

Berg knows that a label such as ‘Made in the Judean Hills’ might not hold sway in Europe. “’Occupied territory’ is just a political definition, a warning. It means, don’t buy it.”

Israel’s Free Trade Agreement with Europe excludes goods from settlements because they are not considered Israeli. The EU is the destination for 20 percent of Israeli exports, but figures regarding the settlement industry are deliberately obscured.

Though the proposed action is limited, it has Israeli diplomats worried.

“I don’t think it’s a constructive step. I actually hope it won’t happen,” says Foreign Ministry spokesperson Paul Hirshson. “There are real estate disputes all over the world. If you’re going to single out only Israel, only Israeli communities in the West Bank and their produce, that’s discriminatory.”

An internal document compiled by Israel’s foreign ministry states that “this measure will in fact harm the Palestinians.” The study titled The Effects of Labelling Settlement Products on the Palestinian Economy, says some 22,500 Palestinians are employed by Israeli settlers. Israeli NGO Kav LaOved (Workers Hotline) and Palestinian labour unions estimate that 10,000 additional Palestinians work without permits in settlements.

Their combined annual income is estimated to be about one billion shekels (277 million dollars) or 9 percent of the Palestinian Authority’s 2012 budget. Berg’s winery provides work for seven Palestinians.

“The Palestinians shouldn’t work in the settlements, shouldn’t support the settlers. It’s shooting themselves in the foot. They must stop. This is against the Palestinian right for self-determination, for statehood,” protests Mahdi Abdul Hadi from the Palestinian Academic Society for the Study of International Affairs.

The proposed EU action is partially heeding the call of Palestinian activists and their supporters engaged in a non-violent campaign for the Boycott, Divestment and Sanctions (BDS) against Israel until it ends its occupation.

The BDS movement is slowly but surely distilling its principles throughout the world. Only last month Denmark, and South Africa, a country which itself experienced international boycott, divestment and sanctions as part of the struggle against Apartheid, decided to label settlement goods as such.

Israeli leaders are concerned that if U.S. Secretary of State Jim Kerry’s effort at jumpstarting peace negotiations with the Palestinians fail, the EU will do the same and thus will gradually join the BDS campaign. Israel would then feel the brunt of isolation.

Meanwhile at the winery, work goes on unperturbed.

A divorced Palestinian, Hiba Abu Shusheh, supports her twins on her own. “There’s no work in Ramallah,” she says. She earns 150 shekels (40 dollars) a day. For her, working in a settlement is simply a question of survival.

The Psagot winery produces 200,000 bottles per year and sells for 30 to 60 dollars a bottle. It’s a brisk business worth roughly 10 million dollars annually. Seventy percent of the wine is exported, mainly to the U.S., Australia and Europe.

Since the wine is kosher, the primary target group is the Jewish Diaspora. Given that, there’s little chance that a change of labelling regulations will seriously affect the settlers’ wine industry. Berg says calls to boycott his wines only increase demand.

A settler supervisor is keen to demonstrate that the winery is an island of Jewish-Arab co-existence.

“You’re my neighbour, my friend, my brother,” insists the settler, giving a bear hug to a Palestinian warehouseman. “For sure,” the embarrassed worker replies – as if to underscore his dejected dependence on the masters of the land.