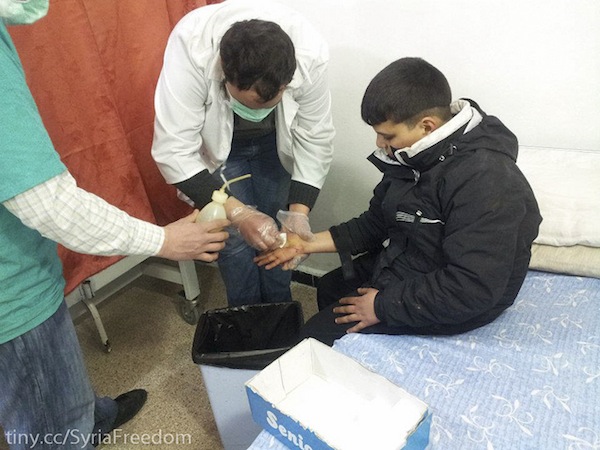 Medical services are increasingly difficult to provide in Syria. Above, a field hospital. Credit: FreedomHouse/CC by 2.0

DAMASCUS, Jun 5 2013 (IPS) - It was nine in the morning when the shell landed in front of nine-year-old Hella al-Abtah’s house in the Yarmouk Palestinian refugee camp in Damascus. Hella survived the initial blast but was critically wounded in the head, and her father rushed her to the Palestine Hospital, blood pouring from the laceration.

Doctors at the hospital managed to stabilise Hella, but the relief was short-lived. Because of a chronic shortage of critical medical supplies and frequent power cuts, they could not complete even routine procedures. Hella passed away, hers one of many needless deaths due to collapsing medical services in the besieged Yarmouk camp.

Before the Syrian uprising began in March 2011, Yarmouk, which, with a population of 125,000, was the largest Palestinian refugee camp in Syria, was a bustling hub in Damascus and home to one of the busiest markets in the city.

Now Yarmouk has become a violent battlefield subject to daily bombardment. Until 2012, Palestinian camps had mainly stayed out of the Syrian conflict, but many are now fully engaged in the fighting.

Since opposition fighters established a permanent presence in Yarmouk, the Syrian army’s siege on the camp has resulted in a complete ban on any medicine or medical supplies entering the camp.

"It is simply impossible for us to deliver sometimes even the most basic services."
-- Abdullah Hariri

The collective punishment enforced on the community, as well as the direct targeting of individuals or groups offering humanitarian support, has severely weakened medical services available to the camp’s embattled residents.

The only place where Yarmouk’s residents can still receive medical treatment is the Red Crescent-run Palestine Hospital. The other two main hospitals were shelled and destroyed by fighter jets and artillery, and many medical staff have fled the camp over the past four months.

Meanwhile, the United Nations Works and Relief Agency (UNWRA), the main body that offers social services such as education and health care to the Palestinians, has withdrawn its entire staff from Yarmouk camp due to the deteriorating security situation. With their evacuation, the community lost many essential health services.

And while doctors, nurses and medical students continue to treat patients in the Palestine Hospital in spite of the risks, the siege on the camp has rendered much of their work impossible, creating shortages in supplies from blood to electricity to the most basic medicines.

“It is simply impossible for us to deliver sometimes even the most basic services, because we have been starved of the essential supplies,” said Abdullah Hariri, a doctor at the Palestine Hospital.

Doctors, nurses or activists who have attempted to smuggle medical supplies into the camp have been targeted as well, with some killed and scores in prison, and hospitals in areas under rebel control, such as Palestine Hospital, are regularly shelled.

Staff have been threatened and intimidated on multiple occasions by security service personnel to abandon their humanitarian mission.

Violations from both sides

Elements of the armed opposition are no less innocent, having abused, threatened and extorted medical professionals in the camp, stolen resources and fuel from the hospital and even opened fire within the building.

“Once, some fighters came and demanded we hand over one of our staff, saying she was a collaborator,” said a doctor at the hospital, who asked to be called by his nickname, Abu Hakam. “This is such a loathsome accusation when you consider [that] she, like us, has chosen to stay, serving the people of the community.”

When hospital staff protested and barred the entrance to the hospital, fighters threatened the staff with guns, forced their way through and kidnapped the nurse. Although she was eventually released after extensive interrogations, such incidents increase the vulnerability of medics who remain active in Yarmouk.

Power shortages and electricity cuts are also hobbling efforts to offer even the most basic medical services.

“Because of the cuts in power supply to the camp, we have to use the electrical generators,” described Hussam al-Hariri, a doctor at Palestine Hospital. “This requires fuel, and as everyone knows, the regime blocks the entrance of fuel to the camp.”

“We have to buy fuel at exorbitant prices, even though we said from the outset that we don’t have any political stance,” Hariri added.

On top of all these challenges, Yarmouk camp has become refuge of sorts to many civilian refugees and opposition fighters from the suburbs and countryside south of Damascus. What remains of the camp’s debilitated medical services has to serve these communities as well as the Palestinians who refused to leave.

Despite having been reduced to a most basic level of operations by both the government’s siege on Yarmouk and aggression from members of the armed opposition, for the residents and refugees in Yarmouk, the camp’s medical infrastructure nevertheless remains critical, for they have little else.