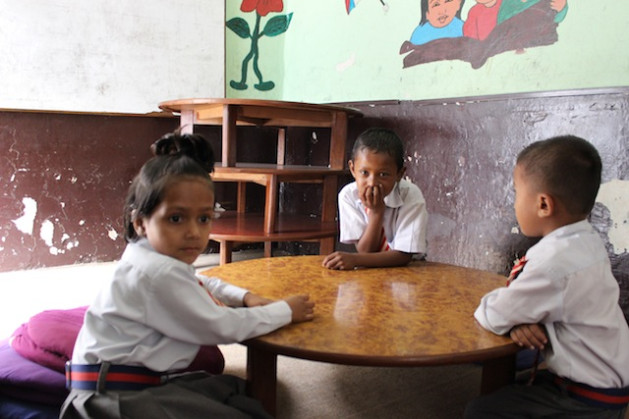 KATHMANDU, Jul 9 2013 (IPS) - Sabitri Kumari Das, a middle-aged mother of two, is rightfully worried about her two young daughters: both girls attend a public primary school in Nepal’s capital, Kathmandu, and neither one of them seems to be advancing academically.

Das fears they stand no chance competing against their peers who attend the costly private schools that dot this city of 30 million people. Unfortunately, she is probably right.

“Quality education means going beyond textbooks, encouraging students to be curious, analytical, to ask questions and draw their own conclusions." -- Bidhyanath Koirala, professor at Nepal’s Tribhuwan University
Eight-year-old Sumi is only just beginning to recognise numbers, whilst her contemporaries in private schools are already doing simple addition and subtraction. Her sister, six-year-old Nandini, spends all day at school playing with friends and has not yet even learned the alphabet.

The results of this year’s School Leaving Certificate (SLC), a final secondary level national examination, often referred to as the ‘iron gate’ since it determines which students will be eligible for higher secondary programmes, illustrate the bleak reality of Nepal’s public education system: only 34 percent of a total of 548,000 students who sat for the test passed, representing an eight-year low.

Numerous public holidays and politically-motivated closures mean that her “kids spend more time at home than they do at school. How will they study?” she asked.

Ironically, statistics indicate that Nepal’s education sector has made significant progress over the last few years, with more than 90 percent of school-aged children now enrolled in primary institutions.

A strong emphasis on girls’ education, in keeping with the MDG target of achieving universal primary education by 2015, has resulted in a rise in female enrollment, from 1.8 million students in 2003 to 2.4 million in 2011.

But expert say these indicators only measure a quantitative change; there is very little discussion on the quality of education, especially in public schools.

Government studies show that eight percent of students in Grade 1 drop out, while 23 percent repeat the grade. Only 70 percent of the original class completes the primary level and less than a third reach Grade 10.

Shisir Khanal of Teach for Nepal, an organisation working towards ending education inequality, says that accessible and quality education should go hand in hand; but little attention has been paid to these twin issues

Questions surrounding high dropout rates – whether related to domestic violence, negative classroom environments or poverty – should have been examined back in the 1990s, which saw a boom in the number of private institutions that charged fees, Khanal told IPS.

This wave of privatisation, which emerged in response to demand for better schools by a rising middle class, effectively turned education into a commercial venture.

With all attention on private institutions, government schools were ignored and soon began to display the telltale signs of neglect: unqualified teachers, inadequate learning materials, and an exodus of disgruntled, barely literate students.

The 2006 April Uprising in Nepal paved the way for a major shift in public education, with protestors demanding that politicians, high-level bureaucrats and lawmakers send their children to government schools like everyone else.

This fuelled a renewed interest, and fresh investments, in the public education system.

Now, of the 7.8 million students in Nepal, 3.3 million attend public schools and the rest attend the roughly 25,000 private institutions spread out around the country.

According to education expert Bhola Dahal, the government and civil society have made concerted efforts to revive the moribund sector, focusing on teacher training, infrastructure development and community organising.

In 2004 the government launched an 814-million-dollar Education for All (EFA) initiative, which was expected to spark sweeping reforms.

A 2009 evaluation of the programme lauded progress in enrollment, access and parity, but the overall quality of the system was judged to be “extremely disappointing”, with a near total absence of mechanisms to monitor classroom environments and students’ achievements.

The EFA evaluation then paved the way for a six-year School Sector Reform Programme (SSRP), a four-billion-dollar national initiative that sought to improve early childhood development and make schooling more relevant to the needs of early school leavers via vocational and technical schemes involving handicrafts and computer skills.

One of the problems is that “Nepali society misunderstands ‘quality education’ as fluency in the English language,” Bidhyanath Koirala, a professor at Nepal’s Tribhuwan University, told IPS.

“Quality education means going beyond textbooks, encouraging students to be curious, analytical, to ask questions and draw their own conclusions.”

Hari Lamsal, under-secretary for Nepal’s ministry of education, says the provision of quality education has been written into government policies for more than 50 years but somewhere along the road its meaning became distorted, with quality being equated with test results, or the number of children passing the SLC.

While some experts blame the problems on a lack of funding, people like Dahal believe the crisis stems from poor allocation of limited resources.

“Of the total SSRP funding (over four million dollars), more than 75 percent goes to pay teachers’ salaries, then textbooks, scholarships, infrastructure (and salaries) of government bureaucrats.

“Less than five percent of that funding goes to quality,” Dahal lamented.

However, until this happens, families with limited incomes face tough choices when it comes to their children’s education.

Das has now taken an extra job so she can send her two daughters to private school, but her combined income only adds up to 50 dollars a month, the same price as a month’s school fees in a private institution.

She is now considering moving out of her two-bedroom rented apartment to a smaller space in order to save more money.

“They say more than 72 percent who (sat for) this year’s SLC from government schools failed and almost 90 percent of those who sat from private schools passed. You tell me, as a mother what other choice do I have?”