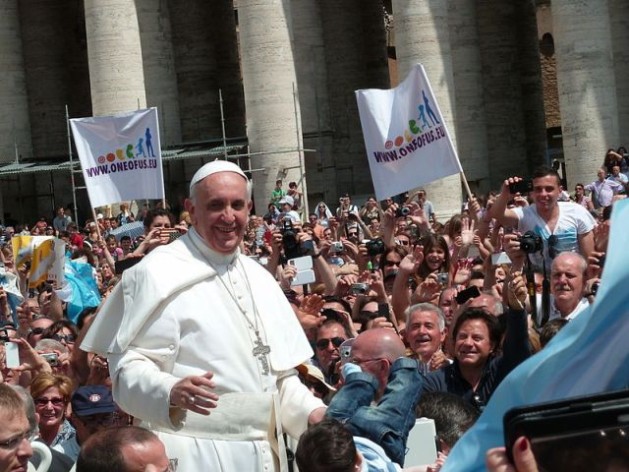 Pope Francis in St. Peter's Square. The Vatican will have until Nov. 1 to respond to the list of demands by the Geneva-based U.N. Committee on the Rights of the Child (CRC). Credit: Edgar Jiménez/cc by 2.0

UNITED NATIONS, Jul 18 2013 (IPS) - Mary Caplan was just 14 years old, and her father was dying of cancer. When she went to the local priest in her hometown of Jersey City to ask for prayers and help, he sexually abused her, and went on to do so for the next two and a half years.

“For me, what’s worse than the original abuse is to know that it is still happening. That’s re-traumatising, and just tragic for society." -- Abuse survivor Mary Caplan

The priest continued to abuse her until her father passed away.

“When my father died, I went to the priest and asked, ‘What did I do wrong?’ I reported [the abuse] to the pastor, and he said, ‘That couldn’t be – I must be in deep grief’,” Caplan said.

The Vatican has largely kept mum about cases of child sexual abuse committed by members of the clergy, despite its signing of the 1989 United Nations Convention on the Rights of the Child.

In what was a historic moment for survivors like Caplan, last week, the Geneva-based U.N. Committee on the Rights of the Child (CRC) publicly called for the Vatican’s disclosure of cases of child sexual abuse committed by members of the clergy.

The Vatican will have until Nov. 1 to respond to the list of demands, and representatives are expected to meet with the Committee in January to answer further questions.

Caplan, who is now a regional director at the U.S.-based Survivors Network of those Abused by Priests (SNAP), one of the non-profits that works with the U.N. panel to speak out against this sexual abuse, applauded the action.

“We hope that this will prod other secular international organisations to do to the same,” she told IPS.

Katherine Gallagher, a senior staff attorney at the Center for Constitutional Rights (CCR), which represents SNAP, noted that the list of questions brought forth by the U.N. Committee regarding the systematic practices of the Church were both “necessary” and “most welcome”.

“After hearing the voices of survivors, the Committee came out with such a strong list of questions for the Vatican on the policies that we see at the Church, [such as] shifting priests from one country to another to evade accountability and pressuring survivors to stay quiet,” Gallagher said at a press conference in New York Tuesday.

Megan Peterson, an active member of SNAP, directly witnessed this practice of “priest-shifting”. In 2004 and 2005, she was abused by a priest from India at her church in Minnesota when she was barely a teen – yet the priest fled and the Church stayed silent when she revealed his offences.

“I came forward when he was still abusing me, but was shut down by the church,” Peterson told IPS. “He fled the country when I came forward, and we’re still in the middle of an extradition process.”

Last October, the Vatican, which had long been called to report on the abuses, finally released a report on the U.N. Committee website.

“The Holy See is a sovereign subject of international law having an original, non-derived legal personality independent of any authority or jurisdiction,” the report stated.

“Many bishops believe that the Church is above the law,” said Sally Butler, a nun who works at Catholic Whistleblowers. The U.S.-based group of priests and nuns banded together in May to speak out against the Church’s past and current handling of sexual abuses.

“The [bishops] feel they have to protect the Church, and they’ve taken an oath to that effect,” Butler told IPS. “They take their oath very seriously.”

In response to the Vatican’s report, SNAP and the CCR filed an additional report, “putting in a whole set of facts that the Vatican simply left out” and prompting a more complete list of issues raised by the U.N. panel, Gallagher said.

SNAP’s report noted that experts have estimated that there were as many as 100,000 victims of clergy sexual abuse between the years 1981 and 2005 in the United States alone.

Caplan said that although she is hopeful about the results of the U.N. demands, she is somewhat sceptical because the Church has withheld information on this ongoing problem for decades.

“For me, what’s worse than the original abuse is to know that it is still happening. That’s re-traumatising, and just tragic for society,” Caplan said.