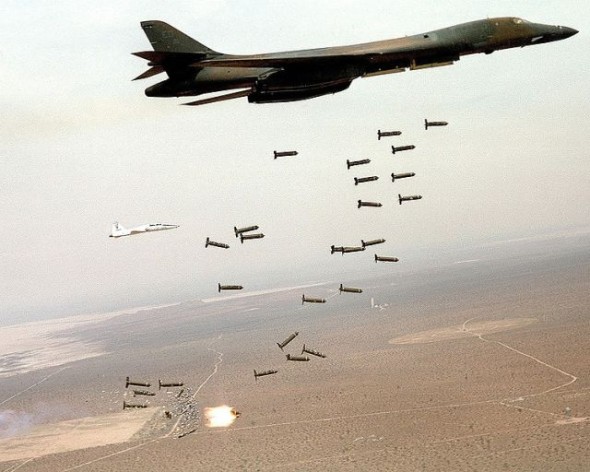 WASHINGTON, Aug 23 2013 (IPS) - Arms control advocates are decrying a new U.S. Department of Defence announcement that it will be building and selling 1,300 cluster bombs to Saudi Arabia, worth some 641 million dollars.

The munitions at the heart of the sale are technically legal under recently strengthened U.S. regulations aimed at reducing impact on civilian safety, but activists contend that battlefield evidence suggests the weapons actually exceed those regulations.

These weapons have not been used by the U.S. in over a decade, so it’s hard to see why it’s in our interest to sell these to Saudi Arabia.” -- Daryl Kimball of the Arms Control Association

Opponents say the move runs counter to a strengthening push to outlaw the use of cluster bombs around the world while also contradicting recent votes by both the U.S. and Saudi governments critical of the use of these munitions.

“Both the U.S. and Saudi Arabia have recently condemned the use of cluster munitions by the government of Syria – that’s ironic given this new sale, because a cluster munition is a cluster munition, no matter what kind it is,” Daryl Kimball, executive director of the Arms Control Association, a watchdog group here in Washington, told IPS.

He was referring to the May 15 vote before the U.N. General Assembly in which both the United States and Saudi Arabia joined 105 other countries in strongly condemning Syria’s use of cluster bombs.

“To my knowledge, the sale of cluster munitions by the United States is infrequent today, so this sale is surprising in the sense that this is a very sophisticated, controversial system because these are cluster bombs,” Kimball continues.

“Further, that these weapons are used by Saudi Arabia is questionable from a military standpoint. These weapons have not been used by the U.S. in over a decade, so it’s hard to see why it’s in our interest to sell these to Saudi Arabia.”

Cluster bombs are air-dropped munitions meant to open in mid-air and release hundreds of additional “bomblets”, thus significantly expanding the potential damage inflicted in the attack. Yet for years global sentiment has coalesced against the use of cluster bombs due to the fact that some of the bomblets invariably fail to explode, resulting in lingering danger for civilians long after conflicts end.

As of 2011, 39 countries were dealing with the after-effects of cluster bomb use, according to the U.S. Campaign to Ban Landmines, an advocacy group. The group says that list includes Saudi Arabia.

“Cluster munitions stand out as the weapon that poses the gravest dangers to civilians since antipersonnel mines, which were banned in 1997,” the Campaign states on its website.

“Israel’s massive use of the weapon in Lebanon in August 2006 resulted in more than 200 civilian casualties in the year following the ceasefire and served as the catalyst that propelled governments to secure a legally binding international instrument tackling cluster munitions.”

In 2007, 47 governments endorsed a binding agreement, the Convention on Cluster Munitions, to outlaw the production, use or even transfer of cluster bombs. Some 112 countries have now signed the convention, and 83 have ratified it.

In mid-September, more than 100 countries will meet in Zambia to discuss progress in implementing the accord.

Neither the United States nor Saudi Arabia has signed onto the convention, however, which means that the newly announced sale is legal. According to reports, the U.S. has also continued to make irregular sales of cluster munitions to India, South Korea and Taiwan.

“Cluster munitions have been banned by more than half the world’s nations, so any transfer goes against the international rejection of these weapons,” Sarah Blakemore, director of the Cluster Munition Coalition, a London-based advocacy group, said in a statement.

“We are disappointed with the U.S. decision to export cluster bombs to Saudi Arabia, as both countries acknowledge the negative humanitarian impact of these weapons on civilians. The U.S. should acknowledge the treaty’s ban on cluster munition exports and re-evaluate the criteria for its export moratorium so that no cluster munitions are transferred.”

There are currently legislative moves afoot here that would severely limit the scope of potential U.S. sales of cluster bombs, beyond an export ban signed into law in 2009. In mid-July, Senator Diane Feinstein, who introduced a related bill in the Senate in February, co-authored a letter to President Barack Obama urging him to halt the use of cluster munitions with high failure rates.

“Cluster munitions are indiscriminate, unreliable and pose an unacceptable danger to U.S. forces and civilians alike. The U.S. government’s cluster munitions policy is outdated and should be immediately reviewed,” the letter states.

The lawmakers call for an immediate halt of the use of cluster bombs with an unexploded rate higher than one percent, a failure rate that also forms the basis of the current export ban. In fact, that one percent limit will become military policy by 2018, though Feinstein and other lawmakers are hoping to expedite that deadline.

Yet even if the Feinstein bill were to become law, the weapons system being sold by the U.S. to Saudi Arabia, known as the CBU-105, may still be legal. According to both the Defence Department and the weapon’s creator, the Mississippi-based Textron Defense Systems, the system’s failure rate is indeed less than one percent.

Proponents have hoped that this “safer” cluster bomb would be able to continue being used and sold, even in the context of the growing crackdown on these munitions. Indeed, the sales to India, South Korea and Taiwan were reportedly of CBU-105s.

Yet the Arms Control Association’s Kimball says there is evidence to suggest that this number is higher. Such evidence comes from the last period in which this model of cluster bomb was used, back in 2003 in Iraq.

“Despite the [public relations] that has been put out regarding the low failure rate of this weapon, in the field its failure rates are much higher,” he says. “This sale to Saudi Arabia should prompt even greater Congressional scrutiny about U.S. cluster munitions policy, particularly the sale of these controversial weapons to other countries.”

Researchers looking at the weapon’s unexploded rate in 2003 in Iraq found that the weapon “clearly does not leave a clean battlefield”.

“The percentage of submunitions which have failed is higher than 1%. Perhaps substantially so,” Rae McGrath, a spokesperson on cluster munitions for the Handicap International Network, stated in a 2008 presentation on findings for this type of weapon.

“At best, these unexploded submunitions would deny access to land for civilian communities until cleared.”