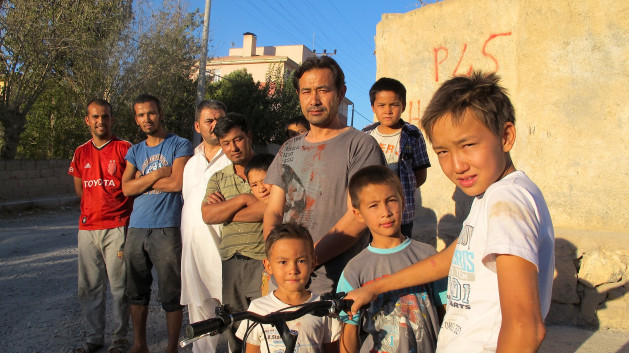 CEYLANPINAR, Turkey, Sep 21 2013 (IPS) - People run back home at dusk, just when the shooting intensifies. To Sha Mehmed the experience is familiar. He was 11 when he left his native Afghan village to settle in this small Turkish town on the border with Syria.

“We are all very scared because three bombs have already fallen very close to here,” says this 42-year-old man born in Baglan, 200 kilometres north of Kabul. He’s lived since 1982 in Ceylanpinar, a small border town 800 km southeast of Ankara.

This is the Turkish town most affected by the Syrian war.

‘Ceylanpinar’ is the Turkish name given to the northern part of the Kurdish town Serekaniye. The Syrian side is called Ras al-Ayn. Between them they are like cold war Berlin, although the wall is here replaced by a railway line with barbed wire erected on both sides.

"So far we've already had four residents killed and over 40 have been wounded..."

This was the railway line which determined the border between Syria and Turkey in 1921. Local Kurdish and Arab families were divided by the line. They paid the price for connecting Berlin and Baghdad by train.

Today Ceylanpinar is an innocent victim of stray bullets and lost bombs from literally across the street.

“I was only three when I arrived so I hardly have memories from Afghanistan,” says Yadigar Arzupinar. But he knows how the Afghan community of about 2,000 sprang up here.

“In 1982, Kenan Evren, coup general and former president of Turkey, travelled to Afghanistan on an official visit. Once back in Turkey, he decided to build 300 houses for our families here.”

But lack of opportunities and the war “just a few metres away” have forced several of his neighbours to migrate to Istanbul and to Antalya, Turkey’s main beach tourist spot 500 kilometres southwest of Ankara.

They left behind a cluster of grey and uninspiring barracks distributed alongside straight and unpaved streets that house the Afghans in Ceylanpinar.

“May god curse all those who make war,” exclaims Gulshan, a 75-year-old woman originally from Kunduz, 230 kilometres north of Kabul. “Is it true that Turkey is helping Al-Qaeda to fight on the other side?” She raises a rumour that has been criss-crossing the town the last months.

True or not, co-existence in this border city has been visibly affected by the war across the railway line.

Ismail Arslan, mayor of Ceylanpinar and a member of the dominant coalition among the Kurds of Turkey, says he is “deeply concerned” about the current situation.

“So far we’ve already had four residents killed and over 40 have been wounded,” he tells IPS. “We often tell our people to stay at home when fighting is intense but several have been hit even within their walls.”

Arslan says the Turkish government is indeed funnelling Islamic fighters across the border. “The area is now heavily packed with Jihadists. Turkey backs them logistically and even evacuates their wounded in Turkish ambulances to the local hospitals.”

The goal, he says, is to prevent the Kurds of Syria from taking control over their territory in Syria.

From the beginning of the Syrian uprising in March 2011, Syria’s three million Kurds have taken a neutral position, distancing themselves from both Damascus and the armed opposition. They are instead fighting for control of the areas where they are compact.

Musa Çeri, district governor and member of the ruling Justice and Development party (AKP) in Turkey, says his country is “far from looking forward to Syrian Kurds building an autonomous region on Turkey’s borders similar to that in northern Iraq.” But he strongly denies the mayor’s accusations.

“My government would never do such a thing,” Çeri tells IPS.

Despite their contradictory versions on the sensitive issue, both agree that the local Afghan community is peaceful and hard-working, and that the rest of the population has never had any complaints with them.

Some have married local residents. “My father is Afghan and my mother is Kurdish but Uzbek is the main language spoken at home,” says Emirhan Celikale, a young man in his early twenties.

The whole Afghan community here is of Uzbek origin, the third biggest Afghan group after the Pashtuns and the Tajiks. A common Central Asian origin makes both Turkish and Uzbek languages mutually intelligible, something that has eased the integration of this group in the country.

Not all among the local elderly long for their homeland. Abdullah Önder boasts a long white beard, and his light blue turban perfectly matches his loose light clothes. He arrived in Ceylanpinar at the age of 27, “just married”.

“We lived right on the border of Tajikistan in a beautiful stone house by a stream,” recalls Önder from the small grocery shop he runs. “We left our village for Helmand, 731 kilometres southwest of Kabul. From there we went to Iran, where my wife and I spent more than one year until we finally got here.”

Önder says he’s not keen on moving back to Afghanistan. “I will end my days here. Have you seen any improvement at all in Afghanistan?” he asks as he pulls the blinds down in his shop for the sunset prayer.