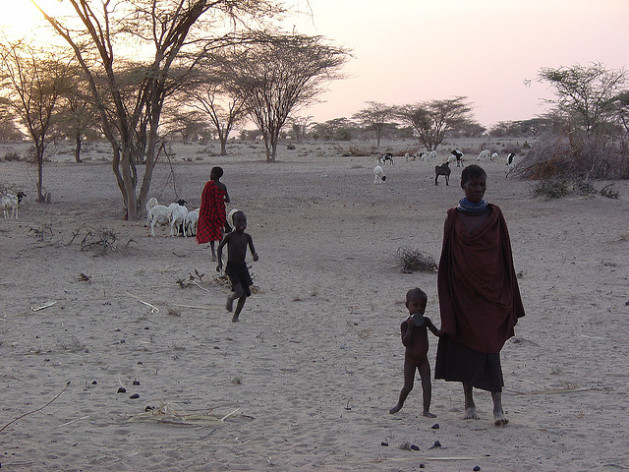 Turkana County is Kenya’s most arid region. Experts say that the discovery of 200 billion cubic metres of water in the region this week must directly benefit the county’s mostly nomad community. Credit: GNR8R/CC by 2.0

NAIROBI, Sep 15 2013 (IPS) - For decades Zakayo Ekeno has walked Turkana County’s arid land, herding his livestock, and his father’s before that. Yet nothing about the persistently drought-stricken land in northern Kenya could have given him an indication of the wealth beneath it.

“I have asked myself many times whether anything good can come out of this godforsaken land,” Ekeno says. Turkana is the most arid and poorest of Kenya’s 47 counties and in 2011 almost 9.5 million people of the mainly nomad community here were affected by severe drought.

So few people could have even dreamt that beneath the sun-scorched, cracked earth was enough water to supply this entire country of 41.6 million people for 70 years.

On Sept. 11, the government and the United Nations Educational, Scientific and Cultural Organisation (UNESCO) announced the discovery of an estimated 200 billion cubic metres of freshwater reserves in Turkana County’s Lotikipi basin.

“Every year our livestock die from lack of water and pasture. We also live in fear of cattle rustlers who steal our animals to replace what they lost. I have been injured during these raids. The water is a solution to this conflict,” Ekeno says.

While the discovery has been met with excitement, water and environment experts like scientist Judith Gicharu caution that this East African government has little capacity or legislation to manage this water sustainably.

“We have the Water Act of 2002 and the Environment Management and Coordination Act of 1999. But they provide no significant policy framework in regard to the management of underground water,” she tells IPS.

“But even where groundwater provisions exist, they are rarely acted upon. Implementation of whatever provisions exist has been compromised by an overlap of duties amongst various government agencies dealing with water and the environment,” Gicharu says.

In Kenya, all water resources belong to the state, and government agencies have to approve and issue permits for water use. But according to a 2011 World Bank report titled “Kenya – Groundwater governance case study”, there is a very limited understanding “of the land surface groundwater linkage among professionals in the relevant sectors, and as a consequence there is no strategic awareness of the need to protect groundwater resources.”

Ikal Ang’elei from Friends of Lake Turkana, a community environmental association, cautions that in the absence of a strong legislative framework that could guide “how resources are to be exploited and who benefits from them, and in what ways, this natural wealth may not improve the country’s fortunes in any significant way.”

“It’s still early in the day and yet the Turkana are missing from the water dialogue. The government is already talking about supplying the entire country with the ‘new’ water, but how much of it will go to the Turkana people?” she asks.

“We cannot take the same direction that the oil dialogue has taken. Since the oil in Turkana was discovered, investors have only been interested in finding out when the oil will start flowing. They are not talking about the benefits to the community,” Ang’elei says.

Economist Arthur Kimani agrees. “The government needs to help the community understand that beyond drinking the discovered water, money can also come out of this resource by, for instance, using the water to grow cash crops.”

But an official in the Ministry of Environment, Water and Natural Resources tells IPS “that couldn’t be further from the truth. In fact, the Turkana people will get water in the next two weeks. We are also engaging the private sector for partnerships that are economically viable to the community.”

Kimani insists that government involvement is key to managing the groundwater supply. He adds that there needs to be public participation in agreeing how this will be done.

“Many companies tend to work with a small clique of well-connected people to come up with an opaque system of declaring the outputs of what has been extracted and revenues.

“The formulas of sharing revenue should be openly agreed upon to create the opportunity for public participation and discourage public officials from seeking personal benefits at the expense of the public, particularly the immediate community living in areas where the natural resources have been found.”

Samuel Kimeu, executive director of Transparency International, Kenya, tells IPS that transparency in the management of natural resources is needed in the entire extraction chain. He says not doing so compromises “the terms of the licenses against the public interest, thus swindling the public of possible revenue.”