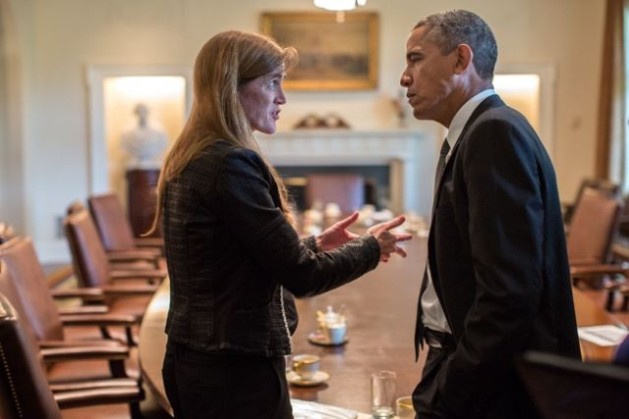 WASHINGTON, Sep 24 2013 (IPS) - On the eve of a possible – if seemingly accidental – encounter between U.S. President Barack Obama and Iranian President Hassan Rouhani in the corridors of the U.N. Secretariat building Tuesday, speculation over the possibility of détente between Washington and Tehran has become rampant.

A series of conciliatory statements and steps taken by both sides in recent weeks has fuelled the imaginations of foreign policy mavens here, with some warning against possible U.S. “appeasement” of what Israeli Prime Minister Benjamin Netanyahu called, in a reference to Rouhani, a “wolf in sheep’s clothing”, and others giddy with the possibilities of ending 34 years of mutual hostility.

So far, the former group, which has clearly been spooked by the remarkably successful public relations offensive conducted by Rouhani and his less-than-two-month-old government, is more vocal, particularly in the Congress where the Israel lobby enjoys its greatest influence.

But among the traditional foreign policy elite and Iran specialists, the optimists appear dominant, encouraged and very pleasantly surprised by developments on the Iranian side of the past few weeks.

Not the least of these was last week’s clear alignment, at least for now, by Supreme Leader Ayatollah Ali Khamenei – regarded as the ultimate “decider” when it comes to matters of foreign and strategic policy – behind Rouhani in an appearance before the hard-line Islamic Revolutionary Guard Corps (IRGC).

Not only did Khamenei call for “heroic flexibility” in negotiating a resolution to the long-running stand-off with the U.S.-led West over Tehran’s nuclear programme in a joint appearance with Rouhani. He also backed up the new president in reminding the IRGC, long regarded as a potential spoiler in any détente strategy, that the Islamic Republic’s founder, the revered Ayatollah Ruhollah Khomeini, had warned against its involvement in politics.

“To the best of my knowledge, the Supreme Leader has never made a statement like that; nor has anybody at a senior level made a public reference to Khomeini’s injunction. I don’t think you’ll ever get a clearer statement,” according to Gary Sick, an Iran expert at Columbia University who served on the National Security Council during the Ford, Carter, and Reagan administrations.

“To me, that sounded like an endorsement of what Rouhani was doing and warning …that, ‘if you’re thinking about a spoiling operation, think again’,” he told IPS.

The current speculation goes beyond a possible resolution of Iran’s nuclear programme to include possible cooperation on regional security issues, including Syria and Afghanistan.

It comes as both Obama and Rouhani prepare to address the U.N. General Assembly Tuesday, a coincidence that has already sparked debate over the pros and cons of the two men “accidentally” meeting and exchanging greetings or more as they pass through the building’s hallways.

Republican leaders generally opposed the idea, while Democrats offered wary support Monday. At the same time, half a dozen activist groups, including MoveOn.org and Win Without War, submitted on-line petitions with nearly 111,000 signatures calling on Obama to meet with Rouhani, while the neo-conservative Wall Street Journal warned that such a move would confer on Iran’s “dictatorship new international prestige at zero cost”.

While such a rendezvous would undoubtedly carry considerable symbolic importance, of more practical significance may have been the announcement after a bilateral meeting Monday between Rouhani’s foreign minister, Javad Mohammad Zarif, and his European Union counterpart, Catherine Ashton, that Zarif, a U.S.-educated former U.N. ambassador, will take part in a meeting of the so-called P5+1 (U.S., Britain, France, Russia, and China plus Germany) on the sidelines of the U.N. General Assembly this week.

Secretary of State John Kerry is also expected to attend the meeting, a prelude to a long-awaited negotiating session to take place in Geneva next month and the highest-level meeting of the two countries since the 1979 U.N. General Assembly when then Secretary Cyrus Vance met with Provisional Foreign Minister Ibrahim Yazdi seven months after the Islamic Revolution, according to Sick.

Meanwhile, however, speculation about the possibility of détente continues apace. Of central importance, according to experts here, will be whether the two sides can agree relatively quickly on interim confidence-building measures (CBMs) surrounding Iran’s nuclear programme, at the very least – something that is likely to be touched on in the P5+1 meeting later this week and explored more fully next month.

At issue here is whether and to what extent the U.S. and its partners should offer sanctions relief – or pile on more pressure – in exchange for Iran’s implementation of CBMs. Most Iran experts here believe that there should be a reciprocal process and that Washington should be prepared to offer more relief than it has tabled in the past.

But Netanyahu, who will address the General Assembly later this week and meet with Obama next week, argues that the West should actually tighten existing sanctions and add new ones until Iran effectively abandons its nuclear programme altogether. In the meantime, he is demanding that Obama take steps to make more credible his pledge to take military action, if necessary, to prevent Iran from acquiring a nuclear weapon.

Lawmakers close to the Israel lobby from both parties are urging much the same line. One letter to Obama from Republican Sen. John McCain and Democratic Sen. Charles Schumer released Monday said there should be “absolutely no relaxing of pressure on the Iranians until the entirety of their nuclear situation has been addressed” and warned that “(r)emoval of any existing sanctions must depend on Iran’s halting of its nuclear program.”

Apart from the nuclear front, speculation about U.S.-Iranian cooperation on regional issues has grown quickly in the wake of the U.S.-Russian accord on placing Syria’s chemical weapons under international control, particularly since Rouhani and Zarif have endorsed it.

Obama himself has hinted that he is prepared to lift U.S. opposition to Iran’s participation in a Geneva II conference to end the civil war in Syria, while Washington’s chief envoy for Afghanistan and Pakistan, Amb. James Dobbins, suggested to IPS last week that Iran could play a useful role in the transition in Afghanistan as U.S. and NATO troops withdraw their combat forces next year as it did at the Bonn Conference 10 years ago.

Both moves, but particularly its involvement in Syria peace talks, would offer Iran something it has long sought: de facto recognition of its importance in a revised regional security structure – a move to which U.S. allies Saudi Arabia, the United Arab Emirates, and Israel have long been opposed.

“Obama will face potent opposition from Israel, its supporters in the United States, and countries like Saudi Arabia,” wrote Harvard international relations professor Stephen Walt on his foreignpolicy.com blog Friday. “These actors would rather keep Washington and Tehran at odds forever, and it’s a safe bet that they will do everything they can to run out the clock and thwart this latest attempt to turn a corner in the troubled U.S. relationship with Iran.”

Nonetheless, “(t)he opportunity for a breakthrough with Iran after 34 years of isolation is tantalizing for Obama and his foreign-policy team,” wrote David Ignatius, a columnist with excellent access to senior administration officials and whose views often represent those of the senior foreign-policy elite, in Sunday’s Washington Post.