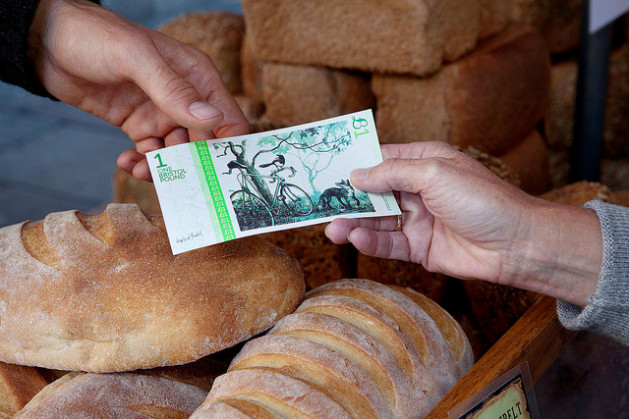 NANTES, France, Oct 8 2013 (IPS) - One evening in the small village of Ashton Hayes in Cheshire, England, someone started a conversation about climate change and energy at the local pub. It was 2005. Two years later, residents had cut their carbon dioxide emissions and energy costs by 20 percent.

"What we're doing could apply to thousands of cities and towns. And we have lots of parties and fun doing it." -- Bristol's Mayor George Ferguson

“People know major changes have to be made in the face of climate change and resource depletion,” said Rob Hopkins, one of founders of the Transition Town movement in which local people get together to find ways to make their streets and neighbourhoods more sustainable.

“It started with friends and neighbours saying ‘what can we do as ordinary people knowing that our governments are not going to sort it out,'” Hopkins told IPS.

Plagued by a mounting trash problem, residents of the South African community of Greyton jammed trash into plastic bottles to make ‘ecobricks’. These make good building material with a high insulation value, and are now being used to construct things like toilet blocks in Greyton.

In Portugal, where unemployment is over 20 percent and wages are depressed, the transition movement is focused on reducing the need to use money. One small town banned money for three days. People shared or exchanged services instead.

“We can make things happen,” said Hopkins, who is author of the book “Power of Just Doing Stuff – How local action can change the world”.

There are now over 1,000 communities involved in Transition Towns, a volunteer, non-profit movement. These communities are inventing their own ways to reduce their dependence on fossil fuels while increasing local resilience and self-sufficiency in food, water, energy, culture and wellness.

According to the U.N. Intergovernmental Panel on Climate Change (IPCC) 2000+page report released Sep. 30, temperatures between 1983 and 2012 were the warmest they have been in the past 1,400 years in the Northern Hemisphere.

The cautiously-worded report details observed impacts such as increased temperatures, precipitation changes, weather extremes and more. It also confirms that these and other impacts will worsen as CO2 emissions increase.

“Cities have the biggest role to play in getting to zero carbon,” said George Ferguson, the mayor of Bristol, a city of half a million people in the UK.

“Bristol emphasises active transport, walking and cycling and we plan to double our tree canopy. We want to improve air quality and the health of residents,” Ferguson told IPS.

One of the first Transition Towns, the city is a living lab for ideas and experiments in creating an ecocity for everyone, he said. Cars are banned on many streets between 3:00 and 5:00 pm to allow children to reclaim them for play. That’s sparked a street-play movement in many other communities.

Bristol is also the recycling champion of Britain and plans to launch a city-owned sustainable energy company. Beginning next year school children will learn about ecology by determining where and what kinds of trees they will plant in their neighbourhoods as part of an annual city-funded greening effort.

“The children will teach their parents important eco-lessons, I believe,” Ferguson said.

He takes his entire salary in the local alternative currency called the Bristol pound. It can only be spent at local businesses.

“I bought my bike, my pants, my food and got my hair cut using the Bristol pound,” he said.

There are over 400 alternative currencies in use around the world and the number is growing quickly in response to globalisation and corporate domination of many businesses. While residents can pay their local taxes in Bristol pounds, the corporate-owned supermarkets won’t accept it, he said.

This summer Bristol was rewarded for its efforts, becoming the European Green Capital for 2015, the first British city to win.

“What we’re doing could apply to thousands of cities and towns. And we have lots of parties and fun doing it,” said Ferguson.

Saint-Gilles-Du-Mene is a rural French village in Brittany that was losing residents and failing economically. It decided to reinvent itself as a community-owned net energy producer. Today, using a combination of wind, solar, biomass and biodigesters and improved housing insulation, it produces 30 percent of its own energy. By 2025, residents hope to sell energy to other communities.

“Our energy transformation has created new jobs and synergies. We have a new video-conferencing facility and produce our own biodiesel for farm tractors,” said Celine Bilsson of the village’s renewable energy commission.

Bilsson said her village was inspired by the example of the Austrian town of Güssing, a once-poor town that was the first in Europe to operate completely on renewable energy in the late 1990s. It cut its energy use 50 percent through efficiency and now makes millions of euros selling renewable energy to others.

“We didn’t spend time doing studies. We just reacted. You just do it,” Bilsson said.