Local Money Sets Its Own Stamp 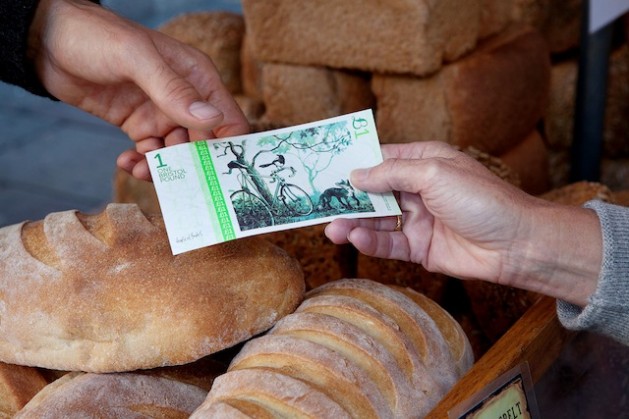 VENICE, Oct 17 2012 (IPS) - Bristol, the eighth most populous town in the UK, has launched a local currency – the Bristol Pound. That makes it one of the largest localities to embrace a complementary currency among more than 2,500 worldwide.

In all, 125,000 Bristol Pounds were put in circulation at the launch, to be purchased by Bristol inhabitants at a parity of 1:1 with the national currency, the pound sterling. They can be spent in one of the 300 local, independent businesses that have committed to accepting the new currency.

Local currencies are one of the alternative exchange mechanisms through which communities try to complement – not replace – the use of national currencies when they are thought not to meet people’s needs. Other popular mechanisms are local exchange trading systems (LETS), usually online systems of exchanging goods and services valued in virtual currency, and time banks in which exchanges are made according to the number of working hours spent on each good or service.

Such alternative exchange systems have existed for over a century but have boomed in the past decade.

“By incentivising spending in independent businesses, the Bristol Pound will help wealth created in Bristol stay here,” says the new currency’s website. Its creators, a group of volunteers, some activists, others entrepreneurs and including a representative of the Bristol Credit Union, will hold sterling reserves to back up the Bristol Pound operations as well as facilitate making payments via mobile text messages.

“With sterling much of the wealth spent in the city is lost to big international business, related management structures, remote shareholders and the boom-bust of the financial banking system,” say the local currency promoters.

The key motivation for issuing local currency is to ensure the survival of local businesses by getting consumers to purchase goods and services produced in the community. Local currencies often report higher circulation rates than national ones – especially when they are designed to expire or devaluate after a set period of non-use – arguably leading to increased demand.

Some of the advocates of local currencies claim that such increased economic activity can lead to reduced unemployment levels locally.

Whether local currencies have a significant economic impact is disputed. What is less controversial is that they guarantee some demand for the local businesses – at least for an initial period – and they create a sense of empowerment in communities.

The multiplication of such currencies over the past years as well as their potential positive impact on local economies has led some commentators to argue that local currencies are a way to help communities weather economic hard times.

One of the favourite examples in this direction is the use of a LETS scheme in the Greek city Volos (population 150,000). Since mid-2010, more than 1,000 inhabitants of Volos (and increasing) have been using the system, which according to Greek media has helped unemployed people get access to products they could otherwise not afford.

In Spain too, time banks have nearly doubled over the past two years to reach almost 300, according to the website Living Without Work that tracks such iniatives. In Italy, time banks have been popular for over a decade, partly because of favourable national legislation. About 250 schemes were already in place in 2002; there are over 320 working now.

“In a financially induced economic depression, you have needy people and unemployed people, but what is missing is the currency connecting the two. In Argentina after the crisis of 2001, thousands of people were surviving and thriving on grassroot currencies. In Greece today we are seeing similar problems and similar solutions.

“But I am not sure that what some people today see as the global renaissance of complementary currencies should be attributed to the global crisis,” Bidewald says. “Other factors like lower transaction costs through technological advancements and a more networked society contribute too.”

A plus of local currencies is thought to be their contribution to the reduction of global transport carbon emissions by discouraging imports. But economist Tim Harford counters: “The environmental cost of driving to the shops or growing food on inappropriate local land is far greater than the cost of the carbon emissions of long-range shipping.” To ensure emissions reductions do happen, some local currency schemes only accept for registration businesses which commercialise organic local food whose production processes are sustainable and low-carbon.

For both critics and advocates of local currencies, a key question is the transformative potential of local currencies. According to geographer Peter North from Liverpool University, local currencies need to start “moving from being a means of circulation between existing local businesses to tools for building greater local resilience by stimulating new local production.”

In order to have an impact on the relocalisation of production, the creators of the Bristol Pound are offering incentives to producers located within 50 miles of Bristol to sign up for the scheme, thus ensuring local businesses can purchase local supplies with the Bristol Pound.

Regardless of their wider impact, local currencies seem to constitute at least a learning experience. “The main tangible benefits of a local currency are building a local economy and enabling high levels of community interaction,” Mary Mellor, a social scientist at Northumbria University tells IPS. “But a less tangible yet very important benefit is that it helps us understand how a whole money system works.

“Local money systems make it clear that money does not come out from nowhere, instead it has to be set up and administered,” Mellor adds. “How much money is created and circulated has to be decided.

“What is very important is that no local money system is created on the basis of debt to the issuer even though it certainly represents a pattern of debts and entitlements between people as it circulates. Modern money, on the other hand, is created nearly all as debt. Local currencies show that it doesn’t have to be this way.”