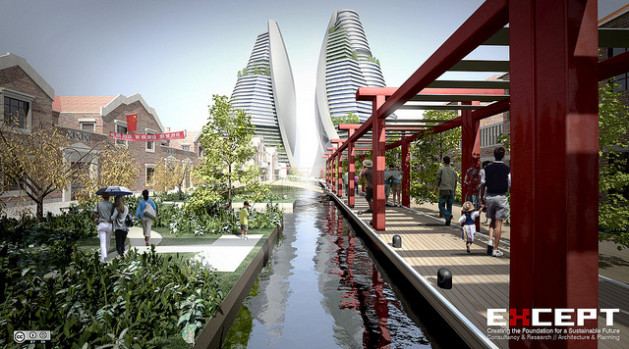 Part of the Sustainable Urban Masterplan for Shanghai, this image shows the channels with pedestrian and slow traffic lanes on the right, and urban food gardens on the left. The channel transports water from vertical farm to vertical farm, cooling the city and being filtered through various plants and organisms along the way. Credit: Except Integrated/cc by 2.0

NANTES, France, Oct 5 2013 (IPS) - With presidents and prime ministers failing to take meaningful action to avert a planetary-scale climate crisis, the mayors of cities and towns are increasingly stepping up to enact changes at the local level.

“Cities are on the front lines of climate change,” Richard Register, founder and president of Ecocity Builders, an organisation that pioneered ecological city design and planning, told IPS.

With the backing of their residents, many cities and towns around the world are becoming cleaner, greener and better places to live by banning cars, improving mass transit, reducing energy use and growing their own food while adding public and green spaces.

Cities are truly ground zero for action on climate change, protection of ecosystems, biodiversity, energy use, food production and more because that’s where most people live today, he said. Cities consume about 75 percent of the world’s energy and resources. They are directly or indirectly responsible for 75 percent of global carbon emissions.

By 2050, 75 percent of the world’s 9.5 billion people will live in cities. The urban areas to house this huge increase amounts to more than all the building humanity has ever done. Nearly all of this new building will be in the developing world.

“All of this new urban infrastructure must be done right,” said David Cadman, a city councillor from Vancouver, Canada and president of ICLEI, the only network of sustainable cities operating worldwide and which counts 1,200 local governments as members.

Climate change is a “five-alarm fire and hardly any national government is taking the needed actions”, he said. On top of that, national governments largely ignore the role of cities and only recently granted them 10 minutes of speaking time at the annual U.N. climate negotiations to create a new global treaty.

“We continue to have the political courage to act,” said Anna Tenje, deputy mayor of the small Swedish city of Växjö, which slashed its carbon emissions 40 percent and aims to be Europe’s greenest city.

Växjö was a very polluted region in the 1960s, but the public and business community backed efforts to re-invent it as a green city. People now fish and swim in the once polluted lakes that surround the city, she said at the 10th Ecocity, the World Summit on Sustainable Cities, a recent conference that drew more than 2,000 mayors, local officials and members of civil society to Nantes.

Växjö is doing also every well economically, Tenje said, proving that cutting emissions is not a burden.

All new apartment blocks are so well-insulated they don’t need furnaces for heat. Solar panels have been installed in schools and on the roof of City Hall. A biogas plant produces vehicle fuel from sewage and school food leftovers, while another larger plant using domestic waste as its feedstock is under construction.

The city aims to be fossil fuel-free by 2030 and has launched a major effort to get people out of their cars by making public transit, walking and cycling more enjoyable than driving, the deputy mayor said.

Last year’s landmark sustainability summit Rio+20 in Brazil chose “The Future We Want” as its motto. While little was accomplished in Rio, some cities and towns were already creating the future they want, said Andrew Simms, a climate economist at Global Witness and fellow of the New Economics Foundation in the UK.

Around the world, cites and towns are creating their version of what Simm’s nine-year-old daughter calls ‘Happyville’:  Green, sustainable places with thriving local economies and healthy, prosperous lifestyles for all residents, Simms told IPS.

Many Danish cities get their energy from wind, and the Belgian city of Ghent doubled the number of bikes on streets in less than 10 years with the dream of becoming car-free. Citizens in the Brazilian city of Puerto Alegre have weekly neighbourhood meetings to discuss how the city budget will be spent, resulting in a big improvement in services.

Cities can also grow much of their own food, Simms said, noting that Havana’s urban gardens grow half the city’s fresh fruit and vegetables. New York City estimates it has 4,000 acres on which it too could grow food. The city of Boulder, Colorado is working towards producing all of its own food.

Skyrocketing resource use fuelled by overconsumption remains a major challenge, but here too cities have a major role to play. The Brazilian mega-city of Sao Paulo banned billboards and transit advertising, while Europe’s premier city, Paris, has reduced such advertising by 30 percent to beautify the cityscape and de-emphasise material consumption.

Simms says that public spiritedness has become rarer in cultures bombarded by 180 ads a day telling people all they need to be happy is to buy stuff.

The only barriers to every village, town and city becoming ‘Happyville’ are a lack of political courage and self-interest dominating public interest, he said.