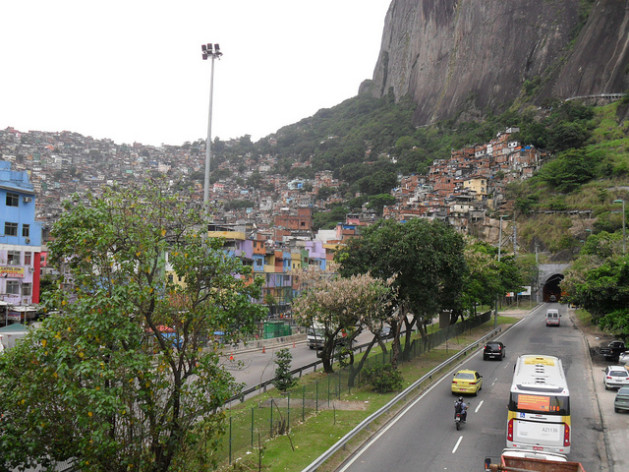 RIO DE JANEIRO, Sep 25 2013 (IPS) - The TransBrasil bus rapid transit system, which will connect poor suburbs with the centre of Rio de Janeiro, will be the high-speed bus corridor that serves the largest number of commuters in the world.

The massive infrastructure works in Rio de Janeiro in preparation for mega-events like the 2016 Olympic Games opened a window for experts to propose to the authorities a baptism of fire: learn about sustainable urban mobility – or better yet, transit-oriented development.

Another gap was opened up by the mass protests that broke out in June in Rio and other cities, initially triggered by the problems plaguing mass transit in Brazil’s major cities.

Images of bumper-to-bumper traffic and queues hundreds of metres long of people waiting for the subway made their way around the world during Pope Francis’ visit to Rio in July.

Although transit-oriented development (TOD) may seem like a new concept, it is not, Robert Cervero, a professor of urban planning at the University of California, Berkeley, told Tierrámerica.*

“The idea is how do we take advantage of these massive and expensive public investments in BRT [bus rapid transit] and in rail to make our communities more sustainable, with cleaner air, making cities more liveable, and bringing public health benefits,” he said. “In America we have a huge obesity epidemic and it is partly because we drive too much and walk too little.”

TOD refers to a mixed-use residential and commercial area designed to maximise access to public transport, often including features to encourage the use of mass transit.

The TransBrasil dedicated bus corridor will be 32 km long and will carry an estimated 820,000 commuters a day. The budget is 570 million dollars, and the project, still in the bidding process, is scheduled to take 36 weeks.

“We have to adapt and adjust to each city, each culture,” Cervero said.

“The idea of TOD is to really focus on the [transformational] capacity of bus rapid transit corridors, subway and metros. And the stations become the focal point for organising redevelopment, mixing land uses: housing, jobs, restaurants,” the expert said.

“You want people to walk and bike. You try to make socially engaging places. The best TOD is more than places to get on and off trains and buses. There are civic spaces, places where people congregate, open markets, safe and comfortable places.”

Organising two global events like the 2014 FIFA World Cup or the 2016 Olympics “is a once in a generation opportunity…a huge opportunity that you don’t want to squander,” Cervero said.

But the most important thing is “what happens afterwards,” he stressed. “Hopefully after the sporting events are over, the mass public investments in infrastructure…will serve neighbourhoods, communities and people. That requires planning. It really takes leadership because we are talking about multiple jurisdictional contexts.”

Cervero was in Brazil to attend the “we are the cities” seminar organised Sept. 18 by the Institute for Transportation and Development Policy (ITDP) to urge local authorities and political leaders to rethink the potential of TransBrasil .

According to the head of ITDP Brazil, Clarisse Linke, this “urban redesign” has not been done in Rio, where it is still a distant idea.

The number of vehicles per capita in Rio has soared over the last decade, to 2.5 million today, and is estimated to rise to three million by 2015. Rio de Janeiro proper has a population of 6.4 million.

On average, people in this city spend an hour and a half commuting every day. But many spend much more time – up to four to six hours a day.

“The big question is how to integrate urban planning with transportation, to make a more equitable and liveable city,” Linke told Tierramérica.

TransBrasil will follow a key route linking the suburbs with the centre: Av. Brasil, a major thoroughfare that runs through dozens of poor neighbourhoods.

“Today that avenue is a scar across a run-down part of the city,” Linke said. “The BRT corridor can revitalise all of the neighbourhoods near the stations.”

BRT, now used in dozens of cities across the globe, was first invented in Brazil. It was pioneered in the southern city of Curitiba in 1974 and is now an international model for sustainable transport.

Traffic in Rio is chaotic, Maria Luiza Korenchendler, an official with the Rio municipal urban planning secretariat, acknowledged. But once the TransBrasil is completed, the time it takes to commute from the suburbs to the city centre will be reduced by 40 percent, she said.

“The big urban transformation will be to create an area of special urban planning interest around Av. Brasil,” she told Tierramérica.

Cervero said: “I’ve been to Brazil many times. Brazil is a very rapidly industrialising and modernising country where a lot of people are buying cars.

“You could also avoid the problems we’ve had in North America [where we have] really extremely automobile-dependent cities.”

BRT has the advantage of cutting commuting time, discouraging the use of cars, and making it possible to transport large numbers of people at very low cost, he said.

“Our experience shows that it doesn’t take a lot of money,” he said. “You need a plan to orchestrate the development and public commitments in order for private investors to follow.

“There is a real chance in Brazil to create and revitalise industrial districts. It takes leadership and it takes time. It is a very bottom- up participatory process, you’ve got to engage local residents and they have to have a sense of ownership in creating this.”