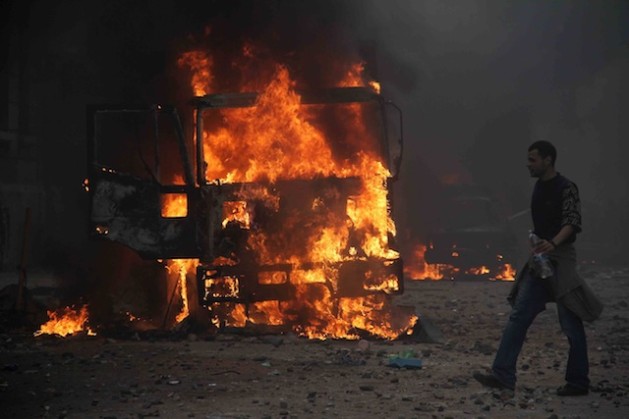 As supporters of the military and followers of ousted elected president Mohamed Morsi clashed in Egypt on Oct. 6, members of the country’s 50-member committee are clashing over the drafting of a consensual constitution. Courtesy: Amro Diab

CAIRO, Oct 7 2013 (IPS) - Bloody clashes erupted in Cairo on Sunday Oct. 6 between supporters of the military and followers of ousted elected president Mohamed Morsi as the latter protested against the July military coup that deposed their leader. But as clashes occurred on the streets, a clash of ideologies has been occurring on the country’s 50-member committee as it amends Egypt’s constitution.

Sunday’s death toll reached 50 and at least 286 people were injured, according to Dr. Ahmed Ansari, chairman of the ambulance. The Interior Ministry reported arresting 423 protesters supporting the ousted president. This is the highest death toll here since Aug. 14, when the military and police smashed two pro-Morsi sit-ins in Cairo, and hundreds were killed.

“The current crisis is political, not constitutional, and the solution would have to be political as well.” -- Hossam Bahgat, director of the Egyptian Initiative for Personal Rights

Egypt stands at a critical stage in drafting a consensual constitution that could satisfy the needs of both civil and Islamic groups along with being approved by the military forces.

Hossam Bahgat, director of the Egyptian Initiative for Personal Rights, told IPS that because of the unresolved political crisis and the deep polarisation of society, “any political and social environment is significantly unsuitable for the making of a constitution through a democratic, inclusive and representative process.”

He pointed out that ironically, “we’re seeing more similarities than differences between the Brotherhood-led constitutional drafting process and the current one.”

On Jul. 8, five days after the overthrow of Morsi, interim President Adly Mansour issued a decree to form the 50-member committee and tasked it with writing a final draft of Egypt’s amended constitution.

The constitution was first drafted by a committee under Morsi’s government, which mainly consisted of Muslim Brotherhood and Islamic movements.

But louder voices from within the 50-member committee, which excludes the Muslim Bother’s party, have started demanding the drafting of a new constitution.

The only Salafi party on the committee, Al-Nour, is likely to defend the Islamic-flavoured articles in the suspended constitution, especially clauses that protect the Islamic identity of the state.

“What the Islamist-majority constituent assembly sought to do last year was to preserve all existing privileges of the military, while giving some concessions to conservative Islamists and undermining the supreme constitutional court, which had shown hostility to Brotherhood rule,” Bahgat said.

In the current constitution, army representatives have pushed for the approval of an article where the Supreme Council of the Armed Forces will be the body responsible for appointing the Defence Minister, provided that this does not affect the powers of the president.

Bahgat said the current process was as exclusionary as last year’s one, “and even more lacking [in] democratic credentials because the current committee was appointed by a president who was in turn appointed by the defence minister.”

“We’re seeing the same dynamic this time where everyone expects the military to get everything they want, while the judiciary will get preferential treatment and most Islamist provisions [will] be undone.”

Bahgat said that the new constitution will not last longer than the 2012 one as Egypt could not have a permanent constitution through a process that excludes the 20 percent of the population who support the ousted president.

“The current crisis is political, not constitutional, and the solution would have to be political as well,” he added.

Ahmed Badie, a spokesperson for the Al-Watan Salafist Party, which was founded in 2013, told IPS “the upcoming constitution will be hostile to Islam and Muslims, because the dominating ideology of the participants is to take revenge [against] Islam.”

“They will manipulate the identity of the state, which would lead to an unlawful constitution,” he said.

Badie believes that Egyptians who voted for the 2012 constitution will reject what he called an “anti-Islam, secular constitution” and that Islamists and the military coup opponents will rally together against this. He added, “[in] the end, legitimacy will remain.”

“What is built on falsehood is false.”

He explained that less than five percent of the clauses in the 2012 constitution that required amendment “but the current committee, which was formed in the dark, wants to blow up our constitution just because it was drafted by the Islamists.”

“How can we compare such a constitution under a military coup to the former one under a democratic regime? This is shameful,” Badie said.

Leftist representative on the 50 member-committee, Hussein Abdel-Razek, told IPS that many things needed to be disposed of from the Brotherhood constitution, which allows for an authoritarian state and gives priority to the interests of the ruling party over the interests of democracy.

“The difference between the two constitutions is clear, they [the Brotherhood] were establishing a religious [constitution], meanwhile we are drafting a constitution for a civil, democratic state based on citizenship and the balance of powers,” Abdel-Razek explained.

Once the constitution has been re-written, Mansour will put the amended version to a national referendum within 30 days of receiving the final draft, which is expected in a month from now. It will be effective upon public approval.

However, this time the process is more open to the public, more transparent and seems to include more rigorous debate. While the 2012 constitution was being drafted most of the agreements were made in closed rooms where the general debate was much less genuine.

Dr Saad al-Din al-Hilali, a jurisprudence professor at al-Azhar al-Sharif, one of the oldest universities in Cairo which was founded in 970, stressed that the constitution of the Muslim Brotherhood contained many clauses that enabled them to remain continuously in power for decades, and assure the supremacy of its members over the rest of the Egyptian people.

He told IPS “the constitution, which is prepared now will find great acceptance, despite the mobilisation of Islamic movements and the Muslim Brotherhood to make citizens reject it in the public referendum.”

“The maturity of Egyptians and the huge rejection of the Brotherhood, which appeared on Jun. 30, will prevent the implementation of their plan, thus the constitution will be approved popularly and legally,” he added.