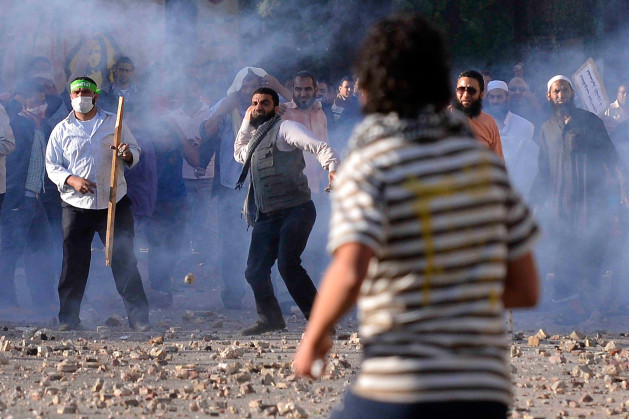 CAIRO, Aug 10 2013 (IPS) - Divisions are opening up within the Egyptian military over the controversial takeover from the ousted government of Muslim Brotherhood leader Mohammed Morsi, a senior party leader says.

“It is clear that there is disagreement within the armed forces, whose members have begun to realise the mistakes of Gen. Abdelfattah el-Sisi,” Dr Hamza Zoba’a, senior spokesperson for the Alhuria wal Adala (Freedom and Justice) party formed from the Muslim Brotherhood told IPS.

“El-Sisi seems to be losing support of his military partners as a result of his misconduct.”

“The spectre of civil war is not far from Egypt."

Zoba’a says the army sits across a red line and should not be dragged into politics. “We do not wish to see a split within the army but we are sure that we will regain our rights.”

Party supporters will press for their rights peacefully, he said. “If the coup leaders want to kill more of us, we will not mind at all.” But while protesting peacefully, Zoba’a said, “the crimes against unarmed protesters who rejected the military coup will not be tolerated.”

Bloody clashes have become a daily scene in Egypt. Alhuria wal Adala members see themselves as victims of political genocide. “We are suffering from persecution now more than the blacks of America in the past,” Zoba’a said.

Alhuria wal Adala have meanwhile backed two political offers made to the military.

The first was launched by former prime minister Hisham Qandil proposing release of Morsi on one side, and an end to demonstrations on the other. The second was a five-step plan presented by Islamist thinker and former presidential candidate Mohamed Selim El-Awa.

The first of these steps would be for Morsi to delegate powers to a new interim cabinet. The cabinet would hold parliamentary elections within the following 60 days, leading to a proper cabinet. The fourth step would be a presidential election and finally then a review of the constitution.

The Brotherhood claims come across a deep political divide. Other leaders deny a split within the army, and see the change as a step towards democracy that would take Egypt past what were emerging as Morsi’s increasingly autocratic ways. “The Egyptian people rescued themselves at the proper time,” Abdel Ghaffar Shukr, head of the Socialist People’s Alliance Party tells IPS.

The solution to the crisis, he says, lies in implementation of the roadmap announced by the army, with a new constitution eliminating the articles that would turn Egypt into a religious state. “The Muslim Brotherhood should recognise the fait accompli. They isolate themselves and refuse to sit at the negotiations table and reconciliation sessions, then complain to the west of persecution.”

The Muslim Brotherhood, Shukr said, was “sacrificing their supporters” in armed clashes to gain the sympathy of the West. Party members are also attacking military installations and cutting off roads, he said.

“The spectre of civil war is not far from Egypt. If the security vacuum in Sinai is not handled wisely and quickly, terrorism hotbeds and Jihadists would move to Cairo, which would lead to infighting and public division.”

The Brotherhood and its allies to the religious right were condemning human rights violations against them, but refusing to apologise for violations from their side. “They must submit the instigators of such violence to trial. It is the only way to make people trust their intentions.”

On the other hand, he said, the liberal parties were now turning a blind eye to human rights abuses against supporters of the ousted president. “Liberals seem tight-lipped in front of the fascist exclusion of the Muslim Brotherhood. The double standards of these political powers are now exposed. Liberals must restore their belief in democracy and cease immediately the absolute support of the army, so long as the Muslim Brotherhood leaders can acknowledge their mistakes.”