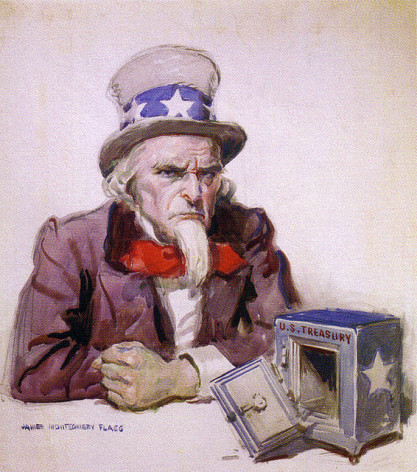 Artwork by James Montgomery Flagg, 1920, commenting on post-World War I conditions, although the image of a depleted Treasury resonates today. Credit: public domain

WASHINGTON, Oct 24 2013 (IPS) - In his 2007 bestseller The World Without Us, journalist Alan Weisman describes a planet that regenerates itself after the disappearance of human beings. Skyscrapers crumble and bridges collapse into rivers, but the primeval forests take over and the buffalo return to roam.

It’s an optimistic vision of the future – if you’re a buffalo or a dolphin or a cockroach. No more ranchers. No more huge trawling nets or D-Con.

It’s an optimistic vision of the future - if you’re a buffalo or a dolphin or a cockroach. No more ranchers. No more huge trawling nets or D-Con.

But it’s not such a great future if you’re a human being. In its dispassionate, non-human-centred perspective, Weisman’s book is designed to shake humans out of our naïve assumption that we will always be around, regardless of the existential threats that drape our shoulders like the cloak of Nessus.

Evolution has, for some reason, made us incapable of facing our own demise. It’s almost as if we wouldn’t be able to balance our checkbook or plan our vacations unless we treated nuclear weapons and climate change and pandemics as just another set of vaporous bogeymen that scare the bejesus out of us but always disappear at morning’s light.

Now let’s turn from the existential to the geopolitical. What would the world be like without the United States?

The recent government shutdown has prompted many to contemplate a world in which the United States hasn’t so much disappeared but collapsed in on itself. Focused on domestic issues, Washington would cancel Pax Americana (or Pox Americana, as anti-imperialists like to say) and step down from its role as the world’s policeman and the world’s financier.

Would the world be better off? As in Weisman’s hypothetical universe, how one answers this question depends a great deal on who one is. Americans certainly profit from our country’s economic and military hegemony: our carbon footprint, our per capita GDP, our mighty dollar, our reliance on English as the world’s default language.

We take these entitlements for granted. Non-Americans, however, might feel a bit differently. Like the buffalo and the dolphins and the cockroaches in a human-free world, everyone outside the United States might very well applaud the end of American superpowerdom.

At the height of the recent political crisis in Washington, an English-language opinion piece from the Chinese news agency Xinhua called “for the befuddled world to start considering building a de-Americanised world.”

It repeated many familiar arguments. The United States “has abused its superpower status and introduced even more chaos into the world by shifting financial risks overseas, instigating regional tensions amid territorial disputes, and fighting unwarranted wars under the cover of outright lies.”

The solution, according to the widely read piece, is to strengthen the U.N., create a replacement for the dollar as the global currency, and give more power to emerging economies in international financial institutions. These all seem like sensible suggestions.

But as several U.S. commentators have pointed out, this provocative essay doesn’t necessarily reflect Chinese government opinion. Beijing remains dependent on U.S. economic power, whether in the form of American consumers or Wall Street liquidity.

And, to the extent that the United States fights terrorism, polices the world’s sea lanes, and continues to more or less constrain the ambitions of its key allies in the Asia-Pacific, China is also dependent on U.S. military power.

Chinese leadership values domestic, regional, and international stability. It wants, in other words, to preserve an environment in which it can pursue its primary objective: domestic economic growth. If it can hitch a free ride on the gas-guzzling, armour-plated American Hummer, China will gladly get on board.

But if the Hummer starts to mess with its economic growth, political stability, and regional interests, China will bail. For now, after a congressional deal has averted default and ended the government shutdown, Chinese calls for “de-Americanisation” have subsided. But political deadlock in Washington is by no means over. And the structural issues that underlie the relative decline of the United States over the last decade remain in place.

Most observers of U.S. decline, from Paul Kennedy to Fareed Zakaria, have generally shared the same ambivalence as China. They see U.S. decline as relative, as gradual, and as something to be mourned in the absence of a viable alternative.

The same could be said of the Latin American nations that have long decried U.S. imperialism. The latest salvos in this conflict have concerned the Snowden affair and revelations of the NSA’s overseas surveillance. But like China, Latin America is heavily dependent on trade with the United States and thus also ambivalent about U.S. economic decline.

Some participants in this debate, of course, have no ambivalence at all. The 2008 documentary “The World Without U.S.” describes the state of anarchy that would result if a future progressive president trimmed the military budget and withdrew troops from around the world.

The film relies heavily on British historian Niall Ferguson’s rosy descriptions of American hegemony. At one point, Ferguson suggests that U.S. military withdrawal would likely send the world down the same path of destruction that Yugoslavia experienced in the 1990s.

The European Union was feckless back then, and continues to be so today. No other guarantor of peace has stepped forward. Only China looms on the horizon, and the film ends with images of nuclear blasts hitting Japan, Taiwan, and South Korea, presumably from Chinese missiles launched in the wake of the U.S. military’s departure from the region.

In Alan Weisman’s book, the primeval forest takes over the once-civilised world. In The World Without U.S., the primeval forces of anarchy take over a world once made stable by U.S. military presence.

It is, in so many ways, a dangerously silly movie. The United States has supported plenty of dictators in the interests of stability. We have generated considerable instability – in Afghanistan, in Iraq – when it has served our interests. Our stability is often unjust; our instability is devastating.

Moreover, we have cut back on our military involvement in Latin America and the region has prospered. We’ve reduced our troop presence in South Korea, including the legendary “trip wire,” and no anarchy has been loosed upon the peninsula. We are finally closing down many Cold War-era bases in Europe, and Europe remains calm.

Remember, the real message of Weisman’s book is that there are still things we can do, as humans, to develop a more cooperative relationship with nature and prevent apocalypse. Similarly, the United States can take positive steps to avoid the global Balkans scenario.

It’s not a matter of appointing a successor as global guardian or duking it out with China to prevent Beijing from stepping into our shoes. It’s not about crawling into our shell and pouting because the world no longer wants to follow our orders.