For U.S. in the Mideast, the Ice Is Getting Thinner 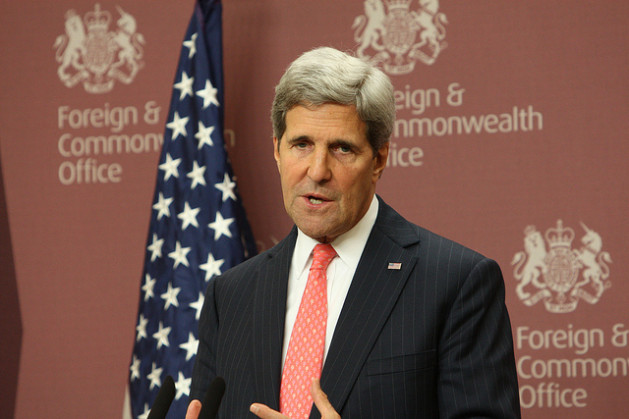 U.S. Secretary of State John Kerry speaking to the media following a meeting of Foreign Ministers from the ‘London 11’, the Core Group of the Friends of Syria, in London on Oct. 22, 2013. Credit: Foreign and Commonwealth Office/cc by 2.0

WASHINGTON, Oct 23 2013 (IPS) - New and unexpected strains in Washington’s ties with two of its closest Middle Eastern allies — Saudi Arabia and Turkey — have underlined the difficult challenges the administration of President Barack Obama faces in navigating its way in the region’s increasingly treacherous and turbulent waters.

While neo-conservatives, many Republicans and other hawks here claim that Washington’s Middle Eastern difficulties are due chiefly to President Barack Obama’s desire to disengage from the region and his failure to aggressively assert Washington’s interests, militarily if necessary, others argue that the forces unleashed by the 2003 Iraq invasion and the so-called Arab Spring have transformed the area in ways that defy U.S. control.

“The notion that one is either ‘with us or against us’ has lost all resonance in the modern Middle East." -- Chas Freeman, Jr

“(F)or all our unmatched military power, Americans no longer command the ability to shape trends in the Middle East,” according to Chas Freeman, Jr., a highly decorated retired foreign service officer who served as U.S. ambassador to Riyadh during the Gulf War. “Delusions of imperial omnipotence die hard.”

Among other trends, “regional actors are redoubling their efforts to recruit outside powers to support them,” he told the Arab-U.S. Policymakers Conference here Tuesday. “This could produce some startling geopolitical realignments.”

U.S. officials were taken completely by surprise Friday when, in a bitter denunciation of the U.N.’s failure to effectively address the ongoing civil war in Syria, as well as the long-running Israeli-Palestinian conflict, Saudi Arabia renounced the coveted seat on the U.N. Security Council to which it had just been elected for the first time by the General Assembly.

Adding to the shock was a front-page report in the Wall Street Journal Tuesday about a meeting between unnamed European diplomats and Saudi intelligence chief Prince Bandar Bin Sultan al-Saud in Jeddah in which Riyadh’s former long-serving ambassador in Washington was quoted as saying that the decision to boycott the Council was meant as a “message for the U.S., not the U.N.”

Bandar, according to the Journal’s sources, said he was not only planning to reduce cooperation with Washington in arming and training Syrian rebels, but that Riyadh also intended to distance itself from the U.S., including by exploring military relationships with other powers that would presumably give higher priority to Saudi defence and other interests.

Asked about the report Tuesday in London where was meeting with his counterparts from 10 other countries that make up the “Friends of Syria” coalition, Secretary of State John Kerry argued that he had just held a series of meetings with Saudi Foreign Minister Prince Saud al-Faisal on which there had been agreement on Syria and other issues and that he had “great confidence” that the two countries “will continue to be the close and important friends and allies that we’ve been.”

Still, while Bandar words may be more bark than bite – nothing has yet come of his much-ballyhooed “secret” meeting with Russian President Vladimir Putin in July reportedly to offer a major arms deal in exchange for Moscow’s reducing support for Syrian President Bashar al-Assad – it’s difficult to escape the fact that Washington and Riyadh are increasingly at odds on a range of other issues.

These include Saudi support for the ongoing repression of opposition movements in Bahrain and Egypt and its failure to more actively crack down against private Saudi funders of Al Qaeda affiliates in Syria and Iraq, not to mention the looming possibility of détente between Washington and Tehran that Riyadh clearly fears could eventually restore Iran to its pre-revolutionary U.S.-backed primacy in the region.

Meanwhile, on the Turkish front, Washington was clearly taken aback by a series of developments that likely to complicate ties with its only predominantly Muslim NATO ally, if they haven’t already.

The well-connected Washington Post columnist David Ignatius reported last week that Ankara’s intelligence chief had deliberately exposed the identity of 10 Iranians who were spying for Israel to his Iranian counterparts, effectively ending a long-running and close intelligence relationship between the two erstwhile allies that began falling off the rails Israel’s 2008-09 military offensive against Gaza.

(The Turkish press reported Tuesday that Washington had cancelled delivery of Predator drones to Ankara in retaliation for the alleged exposure.)

While Ignatius’s account was denied by Ankara, it nonetheless added to suspicions that, despite Turkey’s historic rivalry with Iran, its strong support for rebels seeking to overthrow of Tehran closest Arab ally, Syrian President Bashar al-Assad, and Obama’s personal efforts to mend ties between Turkey and Israel, Prime Minister Recep Tayyip Erdogan remained more favourably disposed toward Tehran than to Tel Aviv.

Moreover, the report came on the heels of Turkey’s surprise announcement last month that it had selected a Chinese company – and one that was under U.S. sanctions for selling military equipment to Iran, no less – over its U.S. and European competitors to build a new long-range missile-defence system despite the fact that the Chinese system would be incompatible with existing NATO equipment.

Even veteran defenders of Erdogan and his Islamist AKP party against the attacks of neo-conservatives and, more recently, the powerful Israel lobby, conceded that the latest developments suggested that the U.S.-Turkish alliance was in deep trouble.

“Considering Turkey’s record, how can the Obama administration continue to tout Turkey as a ‘model partner’ or even treat it as any ally?” wrote Steven Cook, a Turkey specialist at the Council on Foreign Relations (CFR), with Michael Koplow. “We have crossed the line of reasonable disagreement and arrived at a point where Turkey is very clearly and very actively working to subvert American aims in the Middle East on a host of issues.”

The fluidity that now characterises the region’s geopolitics – and the difficulty Washington faces in navigating them — is illustrated by the increasingly complex relations between Turkey and Saudi Arabia themselves.

United, at least until now, on the demand that Assad must go, Riyadh is helping prop up the military regime in Egypt with billions of dollars in aid, while Erdogan continues to demand the restoration of ousted President Mohammed Morsi and an end to the crackdown against the Muslim Brotherhood, the trans-national movement that is seen by the region’s monarchies as a mortal threat.

And while Riyadh and its Gulf allies, like Israel, are increasingly worried about détente between Washington and Tehran, Ankara, which tried unsuccessfully with Brazil to broker a nuclear accord in 2010, appears much more relaxed by the prospect, apparently eager as it is to resume full commercial ties with its eastern neighbour.

And while most of the shifts now underway in the region are driven more by indigenous forces than at any other time since the collapse of the Ottoman Empire, external powers clearly see major opportunities to fill any gaps left open, adding to the new multipolarity.

“The simple world of colonial and superpower rivalries is long vanished,” according to Freeman. “The notion that one is either ‘with us or against us’ has lost all resonance in the modern Middle East. No government in the region is prepared now to entrust its future to foreigners, still less to a single foreign power. So the role of great external powers is becoming variable, complex, dynamic, and asymmetric, rather than comprehensive, exclusive, static or uniform.”