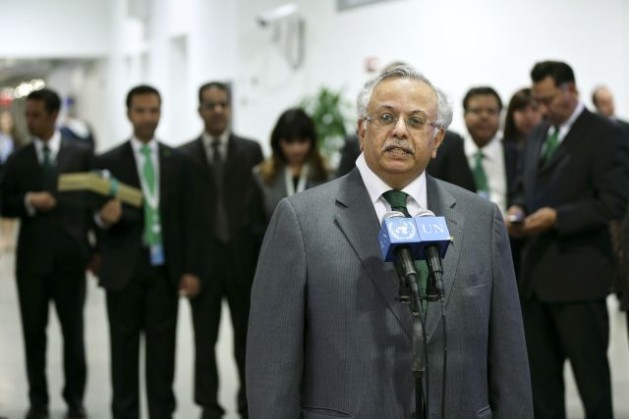 Abdallah Yahya A. Al-Mouallimi, Permanent Representative of Saudi Arabia to the UN, speaks to journalists after the General Assembly’s election of his country to a two-year term on the Security Council. Credit: UN Photo/Ryan Brown

UNITED NATIONS, Oct 21 2013 (IPS) - When Saudi Arabia sought the presidency of the General Assembly in a bid for U.N. glory back in 1991, the oil-rich kingdom was facing Papua New Guinea in a race to head the highest policy-making body in the organisation.

But first, Saudi Arabia had to get the nomination of the Asian Group, which it lobbied heavily, showering some delegates with expensive gifts.

“The Saudi decision to refuse its Security Council seat is as idiosyncratic as one would expect from an absolute monarchy." -- Ian Williams

Ian Williams, a longtime U.N. correspondent and currently a senior analyst at Foreign Policy in Focus, recounts the show of hands at voting time in the Asian Group – long before the era of electronic voting and secret balloting.

“The quip at the time,” Williams told IPS “was that most of the hands raised for the Saudi candidacy had a Rolex on their wrists.”

The story may be apocryphal but it clearly symbolised the widespread under-the-table dealings and horse-trading in elections to U.N. bodies.

Last week, Saudi Arabia’s relentless diplomacy – perhaps sans expensive gifts – paid off when it was elected by the 193-member General Assembly for a two-year non-permanent seat in the U.N. Security Council (UNSC), the most powerful body in the United Nations.

But in a dramatic turn of events Friday, the government in Riyadh expressed its disdain for the UNSC by rejecting the seat it had won less than 24 hours ago.

“The Saudi decision to refuse its Security Council seat is as idiosyncratic as one would expect from an absolute monarchy. It is even possible the King did not know what his foreign ministry was doing,” said Williams, who writes for the London-based Tribune.

The Organisation of Islamic Conference (OIC) Monday backed the Saudi decision to stay out of the UNSC but the Arab Group at the United Nations wants the Saudis to reconsider their decision.

An Asian diplomat told IPS Saudi Arabia is unlikely to change its mind, saying that Riyadh is frustrated over the deadlock in the 15-member UNSC on Syria, primarily because China and Russia have so far vetoed three Western-sponsored resolutions to penalise the government of President Bashar al-Assad.

Mouin Rabbani, co-editor of Jadaliyya, one of the most influential and widely read e-magazines produced by the Arab Studies Institute, told IPS the apparent Saudi decision to decline a UNSC seat is a total fiasco reflecting the growing inability of Riyadh to conduct foreign policy.

“The juxtaposition of the Saudi U.N. mission’s exuberant celebration of the vote with the announcement moments later that the massive Saudi efforts and preparations for this development were all for naught are sufficient confirmation in this regard,” he said.

Rabbani said it remains unclear who is responsible for this decision, and whether the announcement was indeed a decision or rather an attempt at grandstanding to highlight Saudi concerns.

These concerns themselves also deserve further scrutiny, he added. “In declining UNSC membership, the Saudis pointed to its dysfunctional nature, and its failure to resolve the conflicts in either Syria or Palestine.”

Yet, Rabbani argued, Saudi Arabia has for decades been conspicuous in actively undermining the authority of the U.N. to preserve international peace and security, and indeed of the U.N. as an authoritative forum for conflict resolution.

It has done so primarily through collusion with the U.S in the region, most notably Iraq, and as far afield as Nicaragua, he added.

Williams told IPS the Saudi decision also showed the dilemma for a Saudi regime of trying to look after its home constituency and yet appease its essential foreign backers.

Williams said Shihabi absented himself from the meeting – as did the Israeli ambassador, since Israel saw the move as Bush’s attempt to win over the American Israel Public Affairs Committee (AIPAC), after refusing loan guarantees.

That hints at the reasoning behind the shocking decision, he said. “The Saudi diplomacy by its very nature has to be somewhat duplicitous. It wants Iran hobbled, for example, but cannot be seen supporting an attack on a Muslim country,” he said.

“I suspect most people would conclude that it is a little late in the day for the Saudis to suddenly discover the UNSC’s failure and abdication of responsibility with respect to the question of Palestine,” he said.

“And if the Saudis are serious about this issue, why not take it up with their partners in Washington and reconsider their relationship with the Americans before engaging in theatrics at the United Nations?” he asked.

On Syria, Rabbani said, “Riyadh has yet to explain how sponsoring, supporting and arming some of the most extremist forces on the planet to the teeth for the express purpose of conducting ruthless sectarian warfare – not only in Syria but also in Iraq and Lebanon – contributes to the preservation of peace and security it demands of the UNSC.”

It’s now an open question how the Saudis will respond, he said.

“The fear is that – quite possibly in collusion with the Israelis – they will seek to set the region on fire to prevent potential moves towards negotiated settlements in Syria and with Iran,” Rabbani said. “The hope is that true to form they will do as they’re told by the Americans.”