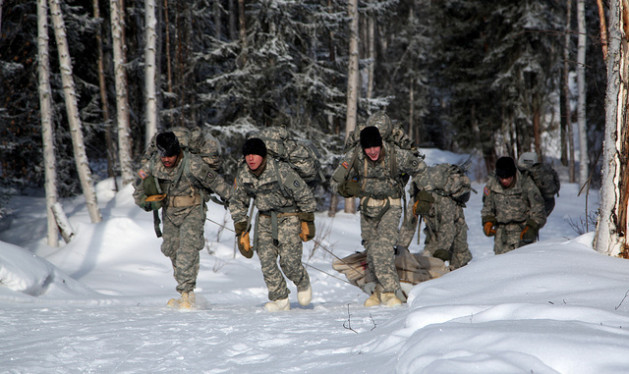 WASHINGTON, Nov 26 2013 (IPS) - The United States is calling for greater cooperation in the Arctic, even as it warns that it will defend its sovereignty in the face of strengthening international interest in newly opening shipping lanes and natural resource extraction opportunities as the region’s ice disappears.

For the first time, the United States has come out with an overarching strategy aimed at guiding its military response in the Arctic. Openly prompted by concerns over climate change, officials say the U.S. vision aims at balancing “human and environmental security” in the region.

“Melting sea ice in the Arctic is a symbol of the destruction of the planet, not an incentive to get there and take everything that until very recently wasn’t possible to take.” -- Gustavo Ampugnani

“This new strategy is hugely important in that it recognises the growing influence of the Arctic both to the United States and as an area of potential military operations,” Seth Myers, a research associate with the Arctic Institute, a Washington think tank, told IPS. “But the biggest question it raises is how any new capability will be paid for” in an era of intense budget-cutting in Washington.

The strategy depicts the Arctic as at an “inflection point”, both in terms of the reduction in ice cover and increase in human activity. Last year, as scientists recorded the lowest levels of Arctic ice on record, nearly 500 ships were able to ply the waters between Alaska and Russia.

That constituted a 50 percent rise since the mid-2000s. U.S. Secretary of Defence Chuck Hagel says experts now expect a tenfold increase over those numbers along what is known as the Northern Sea Route.

“And while there will be more potential for tapping what may be as much as a quarter of the planet’s undiscovered oil and gas, a flood of interest in energy exploration has the potential to heighten tensions over other issues.”

Scientists are currently suggesting that Arctic waters could be almost completely ice-free for a month at a time by the middle of the coming decade, with longer periods forecasted by 2030. Some now worry that such conditions could result in a global free-for-all – what Hagel called “unprecedented challenges”.

“Throughout human history, mankind has raced to discover the next frontier. And time after time, discovery was swiftly followed by conflict,” Hagel said.

“We must wisely manage these 21st century possibilities. In order to realise the full potential of the Arctic, nations must collaborate and build trust and confidence through transparency, cooperation and engagement.”

The new strategy is being unveiled as the United States begins preparations to take over the rotating chairmanship of a key regional governance forum known as the Arctic Council.

This position, slated to begin in 2015, will offer Washington a unique new leadership role on Arctic issues. Indeed, many are pointing to the new military strategy as an important step in crystallising nascent U.S. policy on the issue more generally, though for the moment that vision remains relatively – perhaps strategically – vague.

The Pentagon says it will seek to expand both its understanding of the Arctic environment and its presence in the region, while also promoting collaboration on a range of issues. Currently, the United States stations around 27,000 military personnel in Alaska, and Hagel says the U.S. Navy will offer a new plan for its operations by the end of the year.

Despite this number, in some ways Washington is starting from a relatively weak position. Other Arctic countries have already moved far more aggressively in staking out a position in the region.

Meanwhile, due to across-the-board federal budget cuts known as sequestration, the U.S. military is currently struggling under its first significant funding contraction in decades. Those cuts are slated to continue on an annual basis for the next decade.

“It’s far from certain that the United States is leading [on Arctic issues] at this point. According to quantifiable indicators, Russia has far and away the most interests and capabilities,” the Arctic Institute’s Myers says.

“For instance, the United States has just two icebreakers in the region, both owned by the Coast Guard. Right now, the extent to which the U.S. is going to be actively present in the near to medium term remains unclear, largely because sequestration is still happening. That’s why the strategy places so much emphasis on partnerships.”

Others are worried about the form such partnerships could take, and the ultimate mix of their goals.

The new military strategy builds upon a shorter vision document released earlier this year by the White House, which was criticised for focusing too much on the potential for fossil fuel extraction. Similar criticisms have been made about the policy orientation of the Arctic Council itself.

“We are glad that the Defence Department’s Arctic Strategy acknowledges the diminishing of the ice caps in the Arctic. But the approach shouldn’t be seen as an opportunity for business, nor to create better conditions to do business exploiting its resources,” Gustavo Ampugnani, Arctic team leader for Greenpeace, an advocacy group that has been critical of oil speculation in the Arctic, told IPS.

“Melting sea ice in the Arctic is a symbol of the destruction of the planet, not an incentive to get there and take everything that until very recently wasn’t possible to take.”

According to U.S. estimates, the Arctic seabed holds a significant proportion of the Earth’s remaining untapped petroleum reserves, including around 15 percent of remaining oil and up to 30 percent of gas deposits. Already the Russian state-backed oil company Gazprom has begun drilling for oil (where several dozen Greenpeace activists were recently arrested), while Shell has made repeated attempts to start doing so in U.S. waters.

“If countries grant leases to open more space for the oil corporations, this will speed up not just the industrialisation of the Arctic but also investments in military presence, [leading to] a military race in the Far North,” Ampugnani says.

“From our perspective, the best way to keep the region peaceful, stable and free of conflict … is to prioritise the scientific work, in a cooperative spirit, to understand more how the Arctic ecosystem is key to regulating the global climate.”

U.S. officials have downplayed the potential for natural resource-related tension in the immediate future, pointing out that most oil and gas reserves are relatively near shore and hence within clearly defined territorial waters.