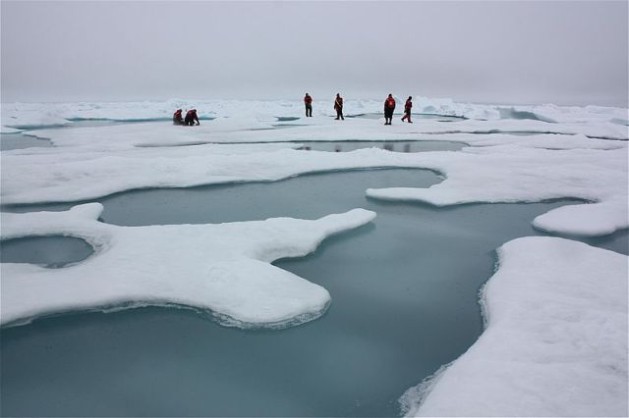 WASHINGTON, Apr 24 2013 (IPS) - With climate change rapidly opening up new opportunities for shipping and resource extraction across the once permanently frozen Arctic, the United States and other northern countries are being compelled to re-examine their policies, both national and collective, towards this region of growing geostrategic importance.

Last week, the president of Iceland, Olafur Ragnar Grimsson, was in Washington to announce the launch of a new group called the Arctic Circle, which would include all counties and entities interested in greater involvement in Arctic-related decision-making.

“We have steadily seen what we considered ‘our Arctic’ becoming the ‘global Arctic’.” -- Icelandic President Olafur Ragnar Grimsson

On Monday, the Centre for Strategic and International Studies, a Washington think tank, proposed a series of reforms to U.S. Arctic policy.

“U.S. Arctic policy must respond to the economic, environmental, security, and geopolitical concerns that confront the region,” the report states.

“It is now time for the Obama administration to enhance U.S. Arctic policy by updating and prioritizing national security … improving interagency cooperation, enhancing U.S. international and public diplomacy related to the Arctic, and increasing the focus of senior U.S. officials.”

The report warns that these activities must begin immediately “if the U.S. is to prepare for and fully maximize its chairmanship of the Arctic Council beginning in 2015.” It also suggests appointing an “Arctic envoy” with the rank of an ambassador.

Currently, Arctic-related international policymaking is made through a consensus organisation called the Arctic Council. Made up of countries with territory in the region, this includes the United States, Russia, Canada, Norway, Denmark, Finland, Iceland and Sweden, as well as observer nations.

However, turning new U.S. policy – or that of any other country – toward the Arctic will be complex. Here in Washington, for instance, as many as six White House groups are currently involved in Arctic issues, with calls for streamlining of this process already being made.

“I believe there are three issues that should be guiding U.S. policy towards the Arctic,” Peter Troedsson, a captain in the U.S. Coast Guard and a military fellow at the Council on Foreign Relations (CFR), a Washington think tank, told IPS.

“First, is an enduring presence and an awareness of Arctic activity. Second, we need to promote the safe use of the Arctic. And lastly, we need to be able to work with other institutions and nations toward developing governance and best practices for the area.”

But beyond the Arctic Council, “We also have the United Nations Convention on the Law of the Sea, which the United States has signed but has yet to ratify,” Troedsson said.

“In two years the U.S. is going to take over the chairmanship of the Arctic Council, so we’re going to be in a position where we are chairing this eight-nation group and we’re going to be the only ones who haven’t signed on to the Law of the Sea. This will seriously damage our credibility.”

Although numerous U.S. political and military officials have urged the country to ratify the Law of the Sea – including, most recently, late last year – conservative members of the U.S. Congress have continually stymied the effort, suggesting that doing so would be akin to ceding U.S. sovereignty.

The melting of the Arctic Sea ice, and the opening of new shipping routes linking Asia to America and Europe, will bring along with it geopolitical considerations that have rarely existed. Already, China is preparing for a world in which it would be the world’s most important trading country, and the Arctic could be a key component of its evolving vision.

“We have steadily seen what we considered ‘our Arctic’, becoming the ‘global Arctic’,” President Grimsson said last week. “Now, countries from faraway places want to have a seat at the Arctic table … They want to discuss not if but when they would acquire a seat on the Arctic Council. This serves as a wake-up call for all the countries located [near] the Arctic.”

During the most recent Arctic Council discussions, in 2012, several Asian states that have no Arctic territory expressed their interest in the organisation.

“If they can send their ships through the Arctic Sea routes, they can shorten this distance by more that 40 percent,” President Grimsson said. “In fact, China is already building ships for this purpose, and Singapore is exploring the potential for an Arctic harbour.”

China has already conducted five Arctic expeditions since 2000, and has established a research station. India followed with the establishment of its own Arctic research station in 2007, while the South Korean government is becoming increasingly active in looking at possible Arctic ventures.

Currently there are two primary sea routes across the Arctic. The first runs north of Canada, while the second, known as the Northern Sea Route, runs from the Bering Strait to the Barents Sea.

This second one, which is currently open only in the summer, condenses the traditional route by about 2,500 nautical miles, saving hundreds of thousands of dollars in fuel costs. The opening of this route would radically alter the transport of goods from Asian industrial hubs to Western consumer markets.

One fear relates to the future role these “newcomers” might have on the region as it is brought within their strategic spheres of interest, and whether this could result in a greater military presence. While the driving forces of these new interests is economic, geopolitical jostling of has already forced the Arctic Council countries to begin debating the “correct” role for these new entrants.

Iceland has welcomed China’s application to join the council, for instance, but it has expressed concerns that the European Union would try to impose a ban on whale hunting, which Iceland has long defended as a cultural tradition. Russia, meanwhile, has welcomed the E.U.’s attempt to become part of the council, but remains suspicious of letting in China.

Environmental responsibility remains another major concern. Increased economic development – including natural resource extraction– could bring with it, for instance, increased possibility of an oil spill that could devastate the pristine Arctic environment for decades.

International and United States Geographical Survey (USGS) research has indicated that the Arctic seabed holds up to 160 billion barrels of petroleum, located at a relatively shallow depth of 500 feet. Less conclusive projects based on preliminary soil samples have also speculated that the Arctic seabed holds substantial mineral and metal deposits.

“There’s already a lot of industrial infrastructure built up there, but there is very little oil-spill response planning,” CFR’s Troedsson says.

“You can imagine it’s going to take a long time to get that kind of response equipment [needed] anywhere in the Arctic, so that challenge can be added to the challenge of how you clean up oil in water that’s close to zero degrees or frozen. No matter how good a response plan is, if any significant incident takes place, the damage would be immense and the public will not be happy.”