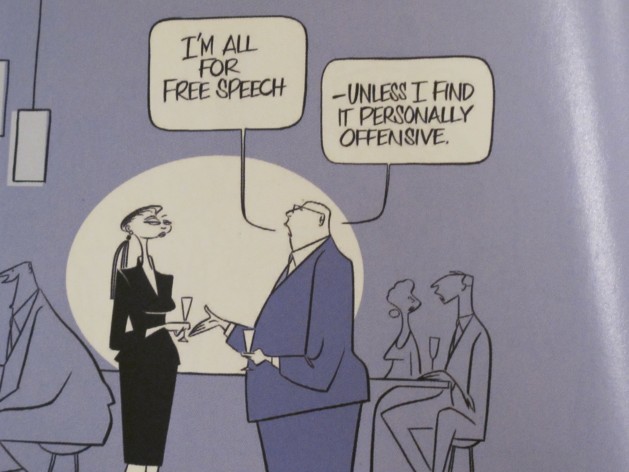 Cartoon by Ann Telnaes in The New York Times.

PARIS, Dec 23 2013 (IPS) - A woman and her husband are seated at a table. As she talks, he seems to be ignoring her, his head hidden behind a newspaper.

“At least Obama is listening to me,” she says.

This is just one satirical reference to the ongoing international surveillance scandal, in a book published earlier this month by the French-based group Reporters Without Borders, which works to protect freedom of expression and of information.

Titled ‘100 Cartoons by Cartooning for Peace for Press Freedom’, the book aims to raise awareness of the many assaults on freedom of expression that have taken place over the past year. It contains cartoons by more than 50 cartoonists from all over the world who have produced some laugh-out-loud work, even when one is aware that the subject isn’t fundamentally funny.

The book looks at freedom of speech, American surveillance tactics, and the state of the world. The section subtitled ‘Spying on the World’ contains some of the most satirical cartoons, but some drawings may offend individual readers.

One troubling aspect of the book, for instance, is the way certain cartoonists tend to depict characters of African origin, whether they are presidents or the poor. Some of the usual stereotypical representations can be found here in a few instances, and they smack of insensitivity, even for readers who try not to be like the person who says in one cartoon: “I’m all for free speech … unless I find it personally offensive.”

“We can’t talk about political correctness and say cartoonists must draw certain groups only in a certain way."

Nicolas Vadot, a Belgium-based cartoonist featured in the book, told IPS that the cartoons involved reflect the style of the individual cartoonist, who draws everyone as “ugly”.

“We can’t talk about political correctness and say cartoonists must draw certain groups only in a certain way,” Vadot says. “You’ll find someone offended by anything.”

Patrick Chapatte, a popular cartoonist whose work appears in international newspapers, said in an interview published in the book that “it’s all a question of temperament.

“Some cartoonists will do anything for a laugh and to try to stretch the limits. I just try to get it right. To know how to be provocative when necessary and to be serious when necessary,” he said.

His understated humour and unfussy drawings make for incisive commentary in the book, as when he shows a commuter in a packed train screeching on his cell phone: “Outrageous! The government is listening to all our conversations!”

For former United Nations Secretary General Kofi Annan, “cartoonists must provoke discussion with sensitivity for the considerations and feelings of others.” But even when they try to do this, cartoons can still offend.

“It may even be required of them,” Annan says in a foreword to the book. “But we cannot forget that the freedom to communicate through images is an important right which must be defended and upheld.

“In no context is this more important than when cartoonists use their images to resist oppression, hold leaders to account, and speak truth to power on behalf of those with no voice,” he adds.

Annan and the renowned French cartoonist Plantu founded Cartooning For Peace in 2006 in the wake of protests and riots around the world sparked by the controversial Danish cartoons depicting the Prophet Muhammad. The organisation now comprises more than 100 cartoonists representing 40 nationalities and all the world’s major religions.

The initiative was meant to highlight the notion that cartoonists’ influence comes with a “responsibility to encourage debate rather than inflame passions, to educate rather than divide,” Annan says.

If anyone doubted the importance of such efforts, a recent report makes for sobering reflection. Reporters Without Borders says that in 2013, 71 journalists were killed in connection with their work, and 87 were kidnapped.

The number of deaths was lower than in 2012, but abductions are a 129 percent rise from last year. Reporters Without Borders says that “Syria, Somalia and Pakistan retained their position among the world’s five deadliest countries for the media.”

The organisation added that “threats and violence forced a growing number of journalists to flee abroad,” while at least 178 journalists are in prison right now.

Cartoonists themselves have been the victims of harassment and even physical harm in a number of countries. The book profiles Syrian cartoonist Ali Ferzat, a critic of President Bashar al-Assad’s regime, who in 2011 was abducted and tortured by assailants. They also broke his left hand – the one he uses to draw. Cartooning for Peace managed to get him out of the country and he now lives in Kuwait, where he still gets threats through the Internet, he says.

Against this backdrop, the drawings in ‘100 cartoons’ take on an added dimension. This is the first time that Reporters Without Borders has brought out a book of cartoons instead of photographs since it began publishing its press freedom books in 1992. The group says that the proceeds from the sales will be used to help fund Reporters Without Borders’ activities in the field in support of journalists and bloggers.