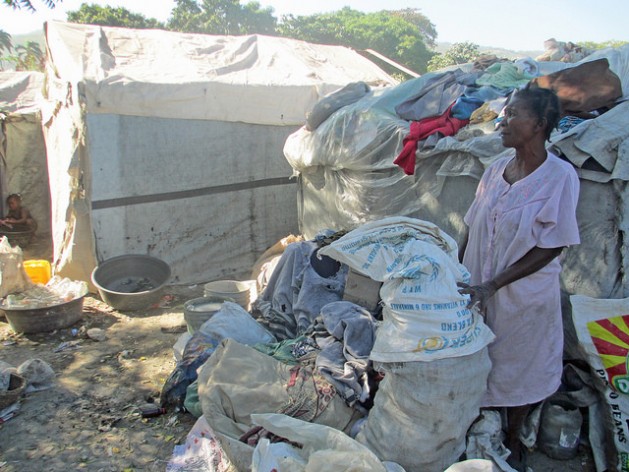 UNITED NATIONS, Jan 29 2014 (IPS) - As violence rips through South Sudan and ongoing conflict plagues the Central African Republic and Syria, developing countries stand at a difficult crossroads – struggling to grow economically and politically, yet fielding deep inequalities within their own borders.

The United Nations Development Programme launched a report Wednesday titled “Humanity Divided: Confronting Inequality in Developing Countries”. It warns that “the world’s population lives in societies that are more unequal today than 20 years ago,” where despite impressive technological advancements, 1.2 billion people still live in poverty.

UNDP Administrator Helen Clark notes that overall, the wealthiest eight percent of the world’s population earns half of the world’s total income, while the remaining 92 percent must fend for themselves with whatever is left.

Basing its framework on the relationship between the inequality of outcomes and inequality of opportunities, the UNDP report stresses that the two perspectives are “interdependent” and that one cannot function without the other.

“The inequality of outcomes refers to inequalities in the material outcomes that matter for human well-being, such as a person or household’s income or wealth status, health and nutritional status, and educational achievements,” Anuradha Seth, a lead author of the report, told IPS.

The inequality of opportunity, she says, refers to the idea that specific groups within a population, such as women and racial and ethnic minorities, consistently face inferior economic, political, and social opportunities than their fellow citizens due to circumstances of birth.

The report makes clear that though the two concepts are interdependent, they also have very different drivers, and only addressing inequality of opportunity will not suffice in moderating inequality of outcomes.

Inequality at the root of conflict

Are some of the worst conflicts we see today rooted in inequality? According to Seth, it’s possible.  “Indeed, there is substantial evidence that both economic inequalities but also horizontal inequalities have played an important and often times key role in driving conflict. And conflict, in turn, can deepen existing inequalities.”

Access to proper food and water, medical care in times of disease, or even quality education for children can also be a major factor in stirring tensions among local populations.

According to a UNICEF study of 43 developing countries, 90 percent of children from wealthier backgrounds have the opportunity to attend school, compared to 64 percent from poorer backgrounds.

Women continue to lag behind men in nearly every indicator of well-being, an example of “horizontal inequality.”

“Horizontal inequalities can undermine social cohesion and can increase political and social tensions – and in some circumstances can fuel instability and conflict,” Seth told IPS.

These inequality gaps include maternal and newborn health. It is estimated that between 2006 and 2010, women in sub-Saharan African were 20 times more likely to die in childbirth than those in Central Asia or Eastern Europe.

“We know well that the biggest source of vulnerability which undermines individual, community and societal resilience is horizontal inequality, that is inequality between groups,” Selim Jahan, director of the poverty practice group at UNDP’s Bureau for Development Policy, told IPS.

Jahan added that a sustainable approach to crisis situations in developing countries would only prove successful if more “empowered and resilient women and women’s organisations” were part of the conversation, both on a community and a household level.

“There will not be much progress in advancing equality for women – and in fact the cause of social justice overall – unless women are enabled to participate in political and public life on an equal footing with men so that they can ensure that their voice and concerns are fully heard.”

In order to allow all individuals to have a fair chance at developing both themselves and their families, the topic of inequality needs to move up the political agenda.

“Even as redistribution remains very important to inequality reduction, a shift is needed towards a more inclusive pattern of growth, one that raises the incomes of poor and low-income households faster than average in order to sustainably reduce inequality, key to the post-2015 development agenda,” the report notes.

And fine-tuning that agenda is the job of more than just governments and development agencies, experts argue.

“The realisation of inclusive society is a very much a common interest, something from which we all stand to gain,” Jahan said. “We need to make sure that it also becomes a joint endeavour. The report we are launching today is meant as a contribution to this process.”