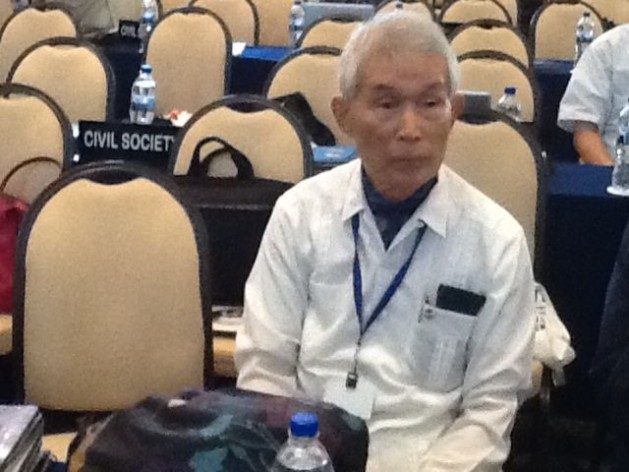 Yasuaki Yamashita at the Second Conference on the Humanitarian Impact of Nuclear Weapons, in Nuevo Vallarta, Mexico. Credit: Emilio Godoy/IPS

NUEVO VALLARTA, Mexico, Feb 14 2014 (IPS) - For decades, Yasuaki Yamashita kept secret his experiences as a survivor of the nuclear attack launched by the United States on the Japanese city of Nagasaki on Aug. 9, 1945.

Yamashita, a 74-year-old artist who settled in Mexico in 1968, broke his silence in 1995 and told the story of what happened that morning to change the fate of Nagasaki and of the whole world.

“I don’t know how many generations it will take for this to end." -- Yasuaki Yamashita

“I was six years old, and we lived 2.5 kilometres away from ground zero (where the bomb detonated). Usually I went to the nearby mountains to catch insects with my friends, but that day I was alone in front of my house, near my mother, who was cooking the day’s meal,” Yamashita, a white-haired, soft-spoken man with fine features, told IPS.

In 1968, he came to Mexico as a correspondent covering the Olympic Games, and he stayed in this Latin American country. Today he digs deep into his past to recall how his mother called him to go into the shelter they had in their home.

They were surrounded by desolation. Everything was burning, there were no doctors, nurses or food. It was just the beginning of an endless tragedy that still endures.

At the age of 20, Yamashita started work at the Nagasaki hospital that treated atomic bomb survivors. He resigned years later.

His story greatly moved the participants of the Second Conference on the Humanitarian Impact of Nuclear Weapons, being held Feb. 13-14 in Nuevo Vallarta, a tourist centre in the northwestern state of Nayarit, and attended by delegates from 140 countries and more than 100 non-governmental organisations from around the world.

The goal of the two-day conference, which follows the previous conference in Oslo in March 2013, is to make progress towards the abolition of nuclear weapons, which are an economic, humanitarian, health and ecological threat to humanity and to the planet.

There are at least 19,000 atomic warheads in existence, most of them in the hands of China, France, Russia, the United Kingdom and the United States – states authorised to possess them under the Treaty on the Non-Proliferation of Nuclear Weapons – as well as India, Israel, North Korea and Pakistan.

The Mexican foreign ministry estimates that there are over 2,000 nuclear weapons on “high operational alert,” ready for launching within minutes.

“These weapons are unacceptable. They must be banned, like biological and chemical weapons. There is no response capability, nationally or internationally, that can deal with the potential damages,” Richard Moyes, of Article 36, a UK-based not-for-profit organisation working to prevent unnecessary harm caused by certain weapons, told IPS.

In February 2013, Article 36 published a study of the likely impact of a 100 kilotonne bomb detonated over Manchester, UK. The broad urban area of Greater Manchester is home to 2.7 million people.

The blast and thermal effects would kill at least 81,000 people directly and injure 212,000 more. Bridges and roads would be destroyed and the health services would be seriously incapacitated, hampering efforts at remedial action. The long term impact on the fabric of UK society “would be massive,” the Article 36 study says.

The Mexico City Metropolitan Area, with a population of over 20 million, carried out a similar theoretical exercise. It found that a 50 kilotonne bomb would affect up to 66 kilometres away from ground zero and some 22 million people, as the damage would extend to areas in the centre of the country beyond the metropolitan area itself.

“The consequences would be severe: loss of operational capacity of the emergency services, loss of rescue workers and health workers, hospitals, clinics,” Rogelio Conde, the coordinator of civil defence at the interior ministry, told IPS.

“We would need help from other Mexican states, and from other countries, such as equipment, and operational and expert personnel,” he said.

Ecological devastation and damage to infrastructure would cause losses equivalent to 20 percent of the country’s economy.

Places on the planet that have become atomic laboratories, like the Marshall Islands in the Pacific ocean, have suffered damage of various kinds.

The Marshall Islands, made up of chains of islands and coral atolls, were the site of 67 nuclear tests between 1946 and 1958.

“There have been environmental and health problems, although they have not been quantified. Many of our survivors have become human guineapigs in the research laboratories, and 60 years on we are still suffering the consequences,” complained Jeban Riklon, a senator in the Islands’ government.

Riklon was two years old and living with his grandmother on Rongelap Atoll when the United States carried out its Castle Bravo test on Bikini Atoll on Mar. 1, 1954, detonating a bomb 1,000 times as powerful as that dropped on Hiroshima in 1945.

The United States immediately performed a secret medical study to investigate the effects of radiation on humans.

A Human Rights’ Council Special Rapporteur’s report after a field trip to the Marshall Islands found violations to the right to health, to effective remedies and to environmental rehabilitation, in addition to forced displacement and other serious omissions by the United States.

The promoters of the Mexico conference want the Treaty for the Prohibition of Nuclear Weapons n Latin America and the Caribbean, known as the Tlatelolco Treaty, which was signed in 1967, to be the model for a future global convention against the bomb, even though they must overcome decades of diplomatic deadlock.

The treaty led to the region becoming the first of the Nuclear-Weapons-Free Zones (NWFZ) which now include 114 nations.

The other four NWFZ are the South Pacific, Africa, Southeast Asia and Central Asia.

The Preparatory Commission for the Comprehensive Nuclear-Test-Ban Treaty Organisation seeks to establish a clear road map to an atomic-weapons-free world by 2020.

There are already 161 states party to this treaty, but its entry into force depends on its signature and ratification by China, North Korea, Egypt, the United States, India, Iran, Israel and Pakistan.

At the Nuevo Vallarta conference there are no representatives from the big five nuclear powers: the United States, China, France, the United Kingdom and Russia.

“I don’t know how many generations it will take for this to end. Why should so many innocent people be made to suffer, when there is no need? This is why we have to make the utmost efforts to abolish nuclear weapons,” Yamashita concluded.