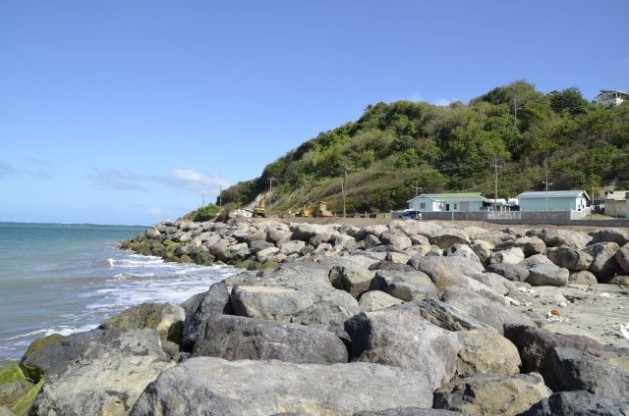 Petite Martinique’s 586 acres are dominated by communal, recreational, artisanal and industrial land in close proximity to each other, and in some cases sharing the same space. The local population of about 900 people use the beachfront land on Sanchez for boat-building, sports, recreation and other outdoor activities.

"The coastal assets are being degraded at a rate that is clearly visible without measurements using scientific tools." -- Bentley Browne

But over the last two decades, the area has experienced extensive erosion. Authorities say that at least 30 metres have been lost over a 15- to 20-year period – a rate equal to 1.5 to 2.0 metres per year – causing severe destruction to the only level piece of land on the island.

The rocky coast located at the north of the beach shifts to a small coral reef, but it’s not enough to protect all of the shoreline from swells and currents. Incoming waves from the Atlantic Ocean regularly pound the shoreline at Sanchez. As a result, any sand moving along the near shore is automatically swept away and lost from the littoral system.

“Our vulnerabilities to natural disasters are tremendous and while we cannot prevent disasters, we can focus on mitigating and building resilience against impacts,” the minister for Carriacou and Petite Martinique affairs, Elvin Nimrod, told IPS.

The erosion has exposed the soft ash-cinder layers, which are light grey to light brown in colour. Authorities worry that if the erosion is allowed to continue, the roadway leading from the end of the recreational field will be undermined and eventually collapse.

At the northernmost section of this eroded area, the headland has been protected by a retaining wall. However, sections of this wall have failed, and although it was recently rebuilt, even parts of that newer wall are also now failing. In addition, the armour stones that have been used to protect this wall are much too small to withstand storm waves, and this has likely contributed to the failure of this structure.

But Sanchez is finally getting help to deal with the problem. It is the first completed climate change intervention under the 10.5-million-dollar Reducing the Risks to Human and Natural Assets Resulting from Climate Change (RRACC) Project being funded by the U.S. Agency for International Development (USAID) and administered by the St. Lucia-based Organisation of Eastern Caribbean States (OECS) Secretariat.

In 2012, Grenada requested support from the secretariat in addressing issues of coastal erosion and reduce compounding impacts from climate change.

The initiative for Carriacou and Petite Martinique was three-fold, outlining a comprehensive approach to address the issues with support from the RRACC.

The coastal restoration works in Sanchez were the first of 11 examples of climate change adaptation interventions to be undertaken under the RRACC Project that will help the nine-member OECS grouping build resilience to climate change and reduce vulnerabilities to its impacts.

The project here included the reclamation of land lost to the sea, as well as the placement of one sea revetment 140 metres long to halt the ongoing erosion of the playing field area and protect critical coastal infrastructure and the armouring of the headland to the north with the construction of a revetment to withstand storm surges and strong wave action.

The director of social and sustainable development at the OECS Secretariat, Bentley Browne, told IPS that these frequent bombardments of the coastlines have resulted in significant loss of fertile land and coastal forestation, including mangroves.

“Today, the coastal assets are being degraded at a rate that is clearly visible without measurements using scientific tools, and it was recognised that this growing problem requires immediate and appropriate mitigation response measures to reduce the vulnerability of these islands to the impacts of climate change,” he said.

Browne said small island developing states (SIDS) like those in the OECS can do little to stop or reverse climate change, and thus “must do all in our power to cope with its consequences”.

“The impacts on small islands have been explored by many scientists and in general, it is expected that sea level rise will lead to greater coastal flooding and damage to shorelines and infrastructure, erosion and threats to livelihoods. As persons who inhabit the small land spaces in the OECS, this is particularly worrisome,” he said at a ceremony in late January marking the completion of the restoration works in Sanchez.

“As a region, we recognise the challenges that confront us. However, we will not be deterred or thrown off our course towards our quest for sustainable development. Our intentions on this matter are clearly etched in pivotal policies and agreements that guide our region’s growth and development.”

He said the OECS Economic Union Treaty, along with the St. George’s Declaration of Principles for Environmental Sustainability in the OECS (SGD), mandate that each member state minimise environmental vulnerability, improve environmental management and protect the region’s natural resource base, thereby increasing its resilience to climate change impacts and allowing continued social and economic benefits.

Mikell O’Mealy, the Eastern Caribbean climate change coordinator with USAID-Caribbean, said the Sanchez project represented a “shining example of a how community can address the very serious issues facing the region with regard to climate change”.

She said once the coral reefs bleach and die, as occurred in Petite Martinique, they no longer provide a critical buffer to protect the shoreline from currents, waves and storms.

“Here, as in so many places in the region and worldwide, the loss of coral reefs and coastal mangroves has led to severe coastal erosion, threatening critical community infrastructure, such as the road that connects your community around the island and the power plant adjacent to the road that supplies the island’s electricity,” O’Mealy said.

She said the restoration project here demonstrates how climate change-induced erosion can be effectively addressed by combining technical expertise and a strong, collaborative community effort.

O’Mealy told IPS that in addition to this project in Petite Martinique, USAID was funding 10 other projects across the Eastern Caribbean and supporting the OECS Secretariat “in helping us all learn from each other … [on] what works best, what didn’t work so well, and how the most successful approaches can be scaled-up in each country and region-wide in the most cost effective way.

“Climate change is unfortunately not going away, and we know at this point that the impacts are predicted to worsen in the coming years. We therefore must continue to try new approaches, learn from each other, and scale-up what works,” she added.