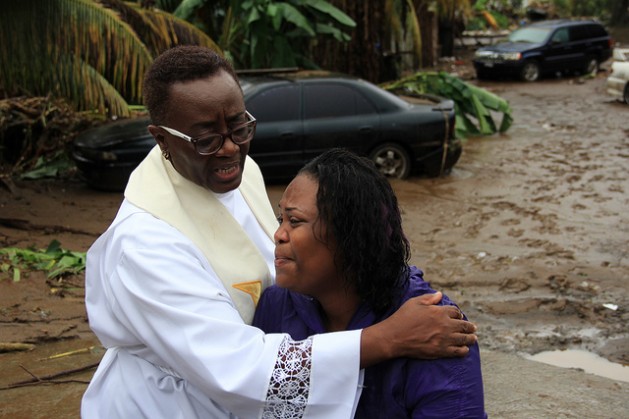 A cleric prays with Colleen James in Cane Grove, St. Vincent hours before it was confirmed that James' sister had died in the Christmas Eve floodwaters. Her two-year-old daughter was still missing. Credit: Desmond Brown/IPS

PORT OF SPAIN, Trinidad, Jan 31 2014 (IPS) - The rise in natural disasters in the Caribbean due to climate change has led to increased suffering for both men and women, much of it as a consequence of socially constructed roles based on gender, experts say.

So although women typically suffer more during natural disasters, gender policies that specifically focus on helping men when disasters strike are also needed, according to a disaster management official in the Caribbean.

"[Women] connect to the whole concept of social capital - relying on each other, family connections and friends." -- Elizabeth Riley

“In the Caribbean region, discussions on gender are relegated to conversations on women,” Elizabeth Riley, the deputy executive director of the Caribbean Disaster Emergency Management Agency (CDEMA), told IPS.

However, she said, experience of natural disasters in the region show that there is a need for psycho-social support programmes for males following a disaster.

A report prepared for the United Nations Development Programme entitled “Enhancing Gender Visibility in Disaster Risk Management and Climate Change in the Caribbean” noted that men often lacked coping skills in the aftermath of a hurricane and were prone to alcohol abuse, stress, and anger.

Riley said reports from regional disasters showed women, on the other hand, responded to such events “by connecting to the whole concept of social capital – relying on each other, family connections and friends.”

She said women in these disasters occupied themselves with consoling children through story-telling, communal cooking and “encouraging people toward a place of recovery.” Other reports showed that men did show some resilience in tackling the reconstruction of their homes.

Reports of natural disasters in the region highlight other male vulnerabilities.

Riley said other reports show that “elderly men are abandoned and incapable of fending for themselves.”

“It is very closely connected to a culture where men have multiple partners and when they reach old age they do not have social capital for support,” she said.

“That is the result of the socially constructed role of men being macho” by having children with several women, she said. “It puts a level of burden on the state because the support for older men is significantly less than that for women,” she said.

In its 2004 macro-economic and social assessment of the damage wrought by Hurricane Ivan in Grenada, the Organisation of Eastern Caribbean States noted that “69 percent of the victims were males, and 70 percent of all deceased were over 60 years old.”

Men may be more likely to suffer physical harm in a natural disaster, said Dr. Asha Kambon, a consultant who worked for 20 years with UN-ECLAC, specialising in natural disasters and their impact on small island developing states. “We women are not as prone to risk-taking as men,” she noted.

Though women typically die in greater numbers than men in a natural disaster, Kambon told IPS the ratio of male to female deaths depended very much “on the environment, on the circumstances.”

For example, in the recent floods that occurred over the Christmas holidays in St. Vincent, Dominica, and St. Lucia, all six of the deaths in St. Lucia were of men, most of whom were attempting to drive through the floods.

She recalled that during floods in Guyana in a recent year, several men died from leptospirosis because of walking through flood waters, whereas no women died from this illness. Kambon said this was because the women took the recommended medication and avoided contact with the flood waters.

Nevertheless, natural disasters do place a special burden on women in the region in ways that mirror the experiences of women worldwide.

In the Caribbean, schools and churches are the most likely buildings to be used as shelters following a natural disaster. This increases the women’s burden of care, said Kambon, since “women are responsible for the children and the elderly, and very often the schools are not reopened rapidly following a disaster. So they have to look after those children, and they cannot go out and look for work.”

According to “Making Risky Environments Safer,” published by the U.N. Division for the Advancement of Women, “Domestic work increases enormously when support systems such as childcare, schools, clinics, public transportation and family networks are disrupted or destroyed” due to natural disaster.

Many poor women in the Caribbean are employed at the lowest end of the tourism industry, and since disasters typically do severe damage to the industry, many are left unemployed because their skills are not easily transferable.

“Men are able to get into the marketplace faster because the skills they possess are transferable. Also, men often have some construction skills so they can get jobs in those sectors and earn an income,” Kambon said.

Women are less likely to be employed in the “cash for work” programmes that are frequently implemented following a disaster to rebuild a country’s infrastructure and to provide paid employment, said Riley, since men have the advantage of greater physical strength.

Kambon said that women are also less likely to be employed in such rebuilding programmes because of being restricted to the home in caring for elderly relatives and children.

Perhaps “a cash for care” programme could be implemented, she said, with a view to providing an income to women who would look after dependent members of the community, thus freeing other women to go out and look for work.

She said such considerations underscore the importance of knowing the gender ratio of the community when devising disaster response programmes.

According to “Making Risky Environments Safer”, “Emergency relief workers’ lack of awareness of gender-based inequalities can further perpetuate gender bias and put women at an increased disadvantage in access to relief measures and other opportunities and benefits.”

Further, in the aftermath of recent regional disasters, there was the issue “of the safety and well-being of women and children,” Kambon said, since there is often a breakdown of law and order.

“What was adequate for men was completely inadequate for women, in terms of cleanliness, safety, location and the ability to use them,” Kambon said.