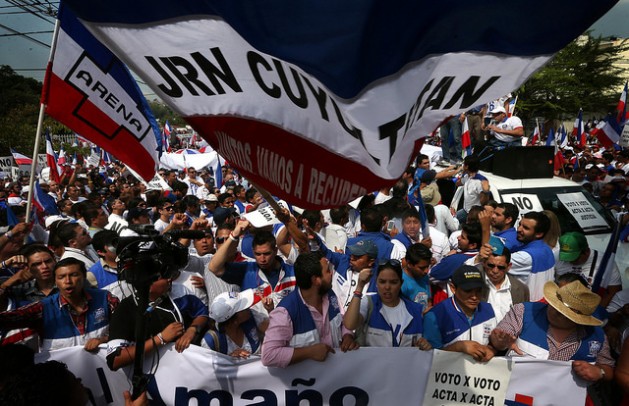 SAN SALVADOR, Mar 13 2014 (IPS) - The few tenths of a percentage between presidential candidates in the elections of Sunday Mar. 9 have been confirmed in the final vote tally, keeping the right in El Salvador in the opposition – and increasingly antagonistic toward the second consecutive government of the leftwing FMLN.

Early on Thursday Mar. 13 the Supreme Electoral Tribunal (TSE) released the final results to a country on tenterhooks, confirming the first count: Salvador Sánchez Cerén, the candidate of the governing FMLN (Farabundo Martí National Liberation Front) has won with 50.11 percent of the vote.

Román Quijano, the candidate for the rightwing National Republican Alliance (ARENA), took 49.89 percent of the vote, the same figure announced in the first count. The absolute difference between the two candidates in this runoff election was only 6,364 votes.

The TSE will officially declare Sánchez president-elect after it responds formally to Quijano’s demand that the election should be annulled. ARENA is unwilling to accept losing by such a narrow margin, and indeed pre-election polls predicted a much more resounding defeat.

“I definitely foresee a combative attitude and greater boycotting of the new government,” social activist Margarita Posada, the coordinator of the National Health Forum, told IPS, in view of the razor-thin margin which has roused ARENA’s hackles.

In the first round on Feb. 2, Sánchez took 48.93 percent of the vote, very close to the 50 percent plus one vote required for outright victory and 10 points above Quijano’s result of 38.95 percent.

Over the last five years, ARENA and the upper echelons of the business community have sustained their rejection of the policies of the outgoing FMLN government of President Mauricio Funes, a distinguished journalist who took office in 2009 and is due to step down on Jun. 1.

The government led by 54-year-old Funes, with Sánchez as vice president, was prudent in the economic sphere but put a strong emphasis on social issues. Its advent ended 20 years of ARENA governments.

This country of 6.3 million people, the smallest in Central America, has a poverty rate of 34.5 percent, some three percentage points lower now than when Funes came to power, according to the official household survey of May 2013.

“Confrontation with the right will be greater now that the next president comes directly from the FMLN,” said Posada.

Sánchez, a 69-year-old teacher, was a commander in the People’s Liberation Forces, one of the five guerrilla organisations that made up the FMLN during El Salvador’s civil war (1980-1992).

The war left 75,000 people dead and disappeared, according to human rights organisations, and ended with the signing of the 1992 Peace Accords in Mexico.

Radicalisation among ARENA supporters became evident from the night of the election, in which 4.9 million voters took part.

Emboldened by their 10-point gain between the first and second rounds, Quijano and the ARENA leadership promoted confrontational actions in the streets to bring into question the victory of the FMLN, which is now definitive.

On Tuesday Mar. 11, hundreds of ARENA activists marched to the TSE, protesting against alleged electoral fraud.

No electoral observers, whether national or international, have given any credence to ARENA’s allegations of fraud. In a special communiqué they expressly stated that the elections were transparent.

The TSE carried out a final scrutiny, comparing the original polling station tally sheets with the preliminary voting results announced Sunday. This process was interrupted on Tuesday because ARENA delegates walked out, protesting that the TSE refused to carry out a vote-by-vote recount, which is not allowed under El Salvador’s electoral laws.

The only exception is when the difference in votes between the parties is less than the number of disputed votes, but the official number of contested votes was only 3,000.

ARENA delegates joined the scrutiny again on Wednesday, making it possible to reach a definitive recount.

Quijano, a 66-year-old dental surgeon and former mayor of San Salvador, on Tuesday requested that the election be annulled, a move immediately rejected by the TSE as unlawful in El Salvador, but to which it is obliged to give a formal answer.

On Wednesday the attorney general’s (AG) office, which oversees elections, issued a statement saying that only one elector was reported to have voted twice, after Quijano called for another rally, this time in front of the AG’s office, claiming there had been 19,000 instances of dual voting.

Taking radicalisation a step further, the opposition candidate said that if the TSE ratified Sánchez’s victory – as it did – he would create a parallel government to that “imposed” by the FMLN.

“ARENA has created a tense situation unnecessarily. There is no mechanism for a vote-by-vote recount,” Juan José Martel, a member of the Junta de Vigilancia Electoral (the official Electoral Oversight Board), told IPS.

“Shock tactics and a boycott of the new government (on the part of ARENA) can be expected, although this will also depend on the governance style of the FMLN,” said Martel. “What is clear right now is that their strategy is to cause destabilisation,” he said.

The military, a key actor, stated it would respect the state institutions and the result declared by the TSE.

“The armed forces reaffirm their complete respect and loyalty to the institutions of the country,” David Munguía, the defence minister, said on nationwide television.

In the long night following the election, Quijano claimed victory when only 37 percent of the returns had been scrutinised, and he called on the army to stay alert.

The media, which mainly take a conservative line, have echoed Quijano’s position, leading to part of the population suspecting fraud.

“The media are playing a dangerous role, because instead of expressing support and respect for the institutions, they are adding to the chaos instigated by the right,” he said.

Commenting on the scant additional support among voters for Sánchez in the second round, analysts highlight the fear campaign waged against the FMLN candidate because of his history as a former guerrilla. His party did not make the most of counter-balancing this view, for instance by emphasising his peaceful career as vice president.