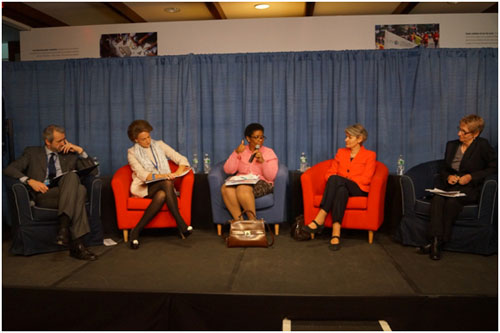 UNITED NATIONS, Mar 12 2014 (IPS) - In order to go to school, Sarah, a girl living in rural Ethiopia, escaped the village and an arranged marriage at 14, returning to her home at age 23, when she could finally enter a classroom again. In a conversation with a youth advocate for education, named Chernor Bah, Sarah asked, “Why does it have to be so hard for me, just because I’m a girl?”

Sarah used to be one of the 100 million women, mostly from least developed countries (LDCs), who could not read.

According to a report by the UN Educational, Scientific and Cultural Organization (UNESCO), titled Education for All Global Monitoring Report, over 15 million young girls out of school are never expected to enroll for classes.

These figures have stirred a number of concerns over gender imbalance in global education, as the 58th session of the Commission on the Status of Women (CSW) got underway.

“There are serious setbacks,” said Irina Bokova, Director-General of UNESCO, “which will affect all sustainable efforts for development to the international community.”

The gender disparity in education is “unacceptable,” said Bokova. As stated in the report, “If recent trends in the region continue, the richest boy will gain universal primary completion in 2021, while the poorest girl will not be able to catch up until 2086.”

Such slow pace in developing education equality is largely resulted from two factors: war and poverty.

About half of the world’s out-of-school population lives in conflict-affected countries, which are usually low and lower middle-income countries that lack early childhood care as well as access to education.

As conflict and poverty bar girls from education, cultural and social perceptions also hinder access and allow for illiteracy to grow.

Without enough female teachers or male teachers trained with gender sensitive courses, girls in the Arab States witness a greater disadvantage. Nearly 60 percent of females are out of school compared to 57 percent in South and West Asia and 54 percent in sub-Saharan Africa.

Phumzile Mlambo-Ngcuka, Executive Director of UN Women called the efforts on girls’ education the “investment that could get the best return ever,” because girls, “represent the whole humanity.”

Mlambo-Ngcuka called for more attention to education from member states and agencies. She said the “issue (of education) is not central enough in the UN”.