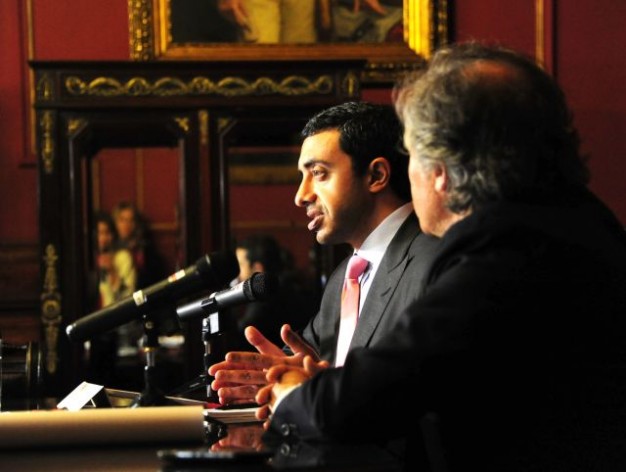 On Monday Apr. 28, Al Nahyan met with his Uruguayan counterpart Luis Almagro before he was received by President José Mujica. On Tuesday Apr. 29 he continued on his tour to Paraguay and Peru.

The minister is visiting the region as part of the delegation of Sheikh Mohammed bin Rashid Al Maktoum, vice president and prime minister of the UAE, who visited Mexico, Brazil, Argentina and Chile, in that order, from Apr. 20 to 26.

The agenda for dialogue in Uruguay included the opening of an embassy by this South American country in the UAE.

In a press conference with Almagro, Al Nahyan said “I look forward to the opening of a Uruguayan Embassy in Abu Dhabi in the near future. This will serve to increase dialogue between the UAE and Uruguay on a range of issues, and to support an expansion of business links.”

Uruguay is particularly interested in drawing investment from the UAE in the projected deep-water Atlantic port in the eastern department or province of Rocha.

Almagro, who visited the UAE in 2011, said that country had experience in participating in similar port projects in Brazil, the Dominican Republic and Peru.

The foreign ministers also reported a project involving cooperation in horse breeding genetics and renewable energy, although the two countries have not yet signed concrete agreements in these areas.

Al Nahyan stressed the need for an adequate legal framework, which according to Almagro is in the final stage of drafting and will include an agreement to avoid double taxation.

He added: “We commend Uruguay for its efforts to spread important messages about climate change to the world and I look forward to welcoming Uruguay’s participation in the Abu Dhabi Ascent meeting, which will support preparations for the 2014 Climate Summit,” to take place Dec. 1-12 in Peru.

The May 4-5 Abu Dhabi Ascent meeting will draw senior U.N. officials, ministers, bankers, and representatives of business and civil society, to promote commitments towards reaching a new global climate treaty in 2015.

The UAE supports Uruguay’s candidacy for a seat on the U.N. Security Council for 2016-2017, Al Nahyan also stated.

In addition, the conversations focused on multilateral relations between the Arab world and Latin America, and particularly sensitive Middle East issues such as the Palestinian question.

In his meeting with Palestinian Authority President Mahmoud Abbas, the two governments indicated an interest in opening embassies.

In Montevideo, Al Nahyan expressed appreciation for Uruguay’s efforts, which he said formed part of “growing international support for the cause of the Palestinian people.”

With Chile he signed an accord to avoid double taxation on income and wealth of air transport and naval companies.

In Argentina, a memorandum of understanding was reached for the peaceful use of nuclear energy.

With the Brazilian government, Al Maktoum signed an agreement in defence for technology sharing, cooperation in training and instruction, weapons, crisis management and logistical support.

With Mexico, where he began his tour on Apr. 20, Al Maktoum signed a declaration on the conclusion of the negotiations of the Accord for the Reciprocal Promotion and Protection of Investment between the two countries.