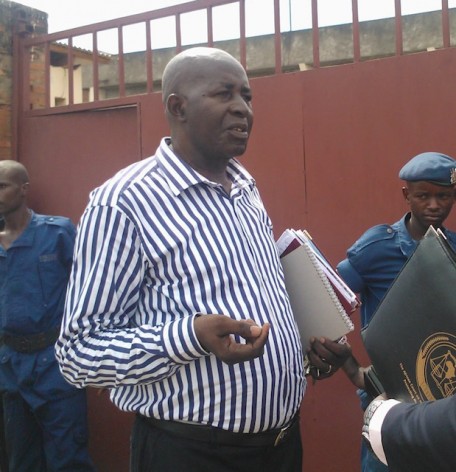 BUJUMBURA, May 27 2014 (IPS) - Burundi could be heading for political violence ahead of the 2015 elections amid allegations that the ruling National Council for the Defence of Democracy-Forces for Defence of Democracy (CNDD-FDD) has been arming its youth wing.

Pierre Claver Mbonimpa, the chairman of the civil society organisation Association for the Protection of Human Rights and Detained Persons, known by its French acronym, APRODH, was taken into custody on May 15 for speaking publicly about the issue. Since his arrest, Mbonimpa appeared to court three times. During his last appearance on May 23 he was denied bail. Civil society groups in this tiny Central African nation tried in vain over the weekend to negotiate his release.

Mbonimpa, who was allegedly in possession of pictures supporting this claim, has repeatedly denounced the paramilitary training of CNDD-FDD’s youth wing, Imbonerakure, in eastern Democratic Republic of Congo (DRC). Mbonimpa alleged that the training was conducted by senior police and army officers.

“The attitude of [the government] in attacking civil society and the opposition, muzzling the media, and trying to silence everyone ... will lead only to a catastrophe." -- Agathon Rwasa, leader of the main opposition National Liberation Forces

Léonce Ngendakumana, the leader of the opposition Alliance of Democrats for Change (ADC-Ikibiri), a coalition of 11 major opposition parties, said that arms were being distributed in order to spread terror among the electorate and force them to vote for the ruling party.

Ngendakumana concurred with the claims by activists that Mbonimpa’s arrest was an attempt to prevent him from speaking out about the arming and militarised training.

“The chairman of APRODH was arrested because he had courageously pointed a finger at the terrorism-oriented behaviour of the Imbonerakure militia,” Ngendakumana told IPS.

Mbonimpa was charged with making false claims likely to harm relationships between Burundi and neighbouring DRC, and for undermining state security. He denied the charges.

“He has been arrested in this regard in a bid to push him to give up inquiring and delivering all the information he has,” Ngendakumana said. He pleaded for a commission of inquiry into the allegations.

However, the Burundi government has turned a deaf ear to the requests from various organisations, including the United Nations Office in Bujumbura, for an investigation into the matter.

In April a confidential correspondence from Parfait Onanga Anyanga, the U.N. secretary-general representative in Bujumbura, to the secretary-general of the U.N., alleged that army and police uniforms and weapons were being distributed to the CNDD-FDD-affiliated youth wing. Two high-ranking army officers were alleged to have been involved.

The Burundi government refuted the allegations, claiming it was an attempt by the U.N. office to divide the Burundian people.

Paul Debbie, the security councillor of the U.N. Office in Burundi, was given 48 hours to leave the country by the government.

“Those who give these reports, which are only rumours, are the ones who have to carry out such investigations,” the government said in a statement.

Agathon Rwasa, leader of the main opposition National Liberation Forces and a presidential candidate, urged the international community to monitor the upcoming elections. He told IPS that he feared if the CNDD-FDD continued to arm Imbonerakure, the situation would eventually become catastrophic. Burundi is recovering from a 13-year civil war that resulted in 300,000 deaths and which only ended in 2006. The last armed group only formally laid down its weapons in April 2009.

“The attitude of [the government] in attacking civil society and the opposition, muzzling the media, and trying to silence everyone [reporting on] their evils will lead only to a catastrophe,” Rwasa told IPS.

“If the government fails to find a solution to what’s said about [CNDD-FDD]-affiliated youth, what would happen in Burundi if all other political parties gave their youth military training and provided them with weapons?”

Rwasa said that the ruling party was seeking to become a dictatorship.

He called on the government to promote dialogue with all key players to ensure a peaceful environment that would ensure fair elections.

Léonidas Ntahimpera, a political analyst from Bujumbura, told IPS that the ruling party had no reasonable explanation for the military training of its youth.

“Instead of explaining this suspicious venture, the government just opts to shut up any disturbing voice,” said Ntahimpera, referring to Mbonimpa’s arrest.

He said that the current socio-political situation was just a prelude to an situation of fear ahead of the 2015 elections.

“The tense situation observed for the time leads to threats of electoral violence as it happened in Kenya in 2007 and in Côte d’Ivoire in 2012 where election exercises were marred by violence,“ said Ntahimpera.

Ntahimpera urged the government to promote transparency and political tolerance and acceptance before, during and after the elections.

“Imagine there are candidates who are prohibited from running their campaigns for their own security, or [parties] where their members are intimidated in their activities. How can they believe in the outcomes of the elections?”

Pacifique Nininahazwe, the chairperson of the Forum for Conscience and Development, a civil organisation in Bujumbura, told media here that imprisonment was being used as a weapon of intimidation and harassment against human rights activists, journalists, and whoever expressed views that conflicted with those of the ruling party.

He said he failed to understand why the government was unwilling to investigate the allegations.