MOSCOW, May 21 2014 (IPS) - International bodies and local campaign groups have repeatedly criticised Russia for not doing anywhere near enough in terms of providing prevention services or access to medical treatment for HIV/AIDS sufferers. The fourth Eastern Europe and Central Asia (EECA) HIV/AIDS Conference, which finished in Moscow last week, has not put a stop to that criticism.

Boycotted by many domestic and international organisations working with HIV/AIDS sufferers and those most at risk of contracting the disease, the conference – and the Russian authorities’ overall approach to HIV/AIDS – was accused of blatant hypocrisy.

The critics said that the hosting of the event in Russia, which has one of the world’s highest HIV/AIDS incidence rates, is a slap in the face for people in Russia with the disease or at risk of contracting it.

And as ministers trumpeted their supposed good work, sufferers were continuing to be denied prevention services and treatment widely available in other developed states, campaigners said.

Anya Sarang, head of the Moscow-based Andrei Rylkov Foundation for Health and Human Rights group, told IPS: “Giving any support to this conference is verging on the criminal. The conference shows not just the hypocrisy of a country with the worst HIV policy in the region, if not the world, but is also a waste of valuable money.

“It is much easier [for Russia] to organise a conference and talk about how much money has been spent on HIV than to build effective systems to deliver HIV prevention and care.”

Russia has one of the world’s fastest growing HIV/AIDS epidemics, according to groups like UNAIDS and the World Health Organisation (WHO) and HIV incidence has continued to rise in recent years. There were 77,896 new cases officially registered in 2013 – 10.1% higher than in 2012 – according to the Russian Federal AIDS Centre.

Russian officials speaking at the conference, however, praised their own work on tackling the disease.

“It is much easier [for Russia] to organise a conference and talk about how much money has been spent on HIV than to build effective systems to deliver HIV prevention and care.”
Health Minister Veronika Skvortsova pointed out that Russia’s HIV infection rate is currently 463 out of every 100,000 people, but that “in other countries that boast of their preventive efforts, the prevalence is higher. In the United States, 600 out of 100,000 people are infected and, in Brazil, the infection rate is about 500.”

Critics point out though that there is no way of independently checking these figures as Russia does not supply such data to UNAIDS or the WHO.

Meanwhile, other officials lauded the 3.2 billion dollars that the country had spent on HIV/AIDS between 2006 and 2013 and said that treatment and detection programmes were well funded.

But international bodies and local campaign groups are also attacking what they say that the government is allowing, or even actively encouraging: the discrimination of at risk groups, particularly drug users.  The latter group, they argue, is key to halting the spread of the disease because research has shown that the epidemic in Russia is being driven by intravenous drug use.

Critics point to repressive drugs legislation, the stigmatisation and discrimination of drug users in society and many primary health care facilities as well as a ban on opioid substitution therapy (OST). Meanwhile, harm reduction programmes, including needle and syringe exchanges, are very limited and receive little or no central government support. 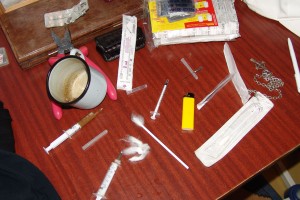 This comes despite the fact that prevention programmes, including OST, are widely implemented in many countries around the world, are recommended by the World Health Organization (WHO), and have been proved to be successful in halting the spread of HIV/AIDS.

Speaking at the conference, Michel Sidibe, Executive Director of UNAIDS, explained how authorities in China, which had once operated a zero tolerance approach to drug use, had seen dramatic success in its fight against the disease following the introduction of OST programmes.

Describing progress in China on HIV prevention as “remarkable”, he said that over the course of six years more than 385,000 patients were enrolled in 800 methadone substitution clinics and that today new HIV infections among patients receiving methadone were close to zero.

“The data from China are bold and clear – harm reduction and substitution therapy are evidence-based programmes that save lives,” he said, adding that drug users in EECA countries should “not be treated like criminals” but given help.

However, the lack of prevention services is not all that is hampering a more effective response to the disease. There are problems for those already diagnosed. Access to anti-retroviral treatment is very low – with as little as eight percent of all those in need of it being able to obtain it in Russia.

Systematic care of those diagnosed with the disease is also inadequate and UN officials have previously told IPS that a lack of integration of patients with HIV into the primary health care system means that they are given a referral to a special treatment centre following diagnosis and then largely forgotten about by their doctors.

Meanwhile, doctors have warned that persecution of homosexuals, drug users and people with HIV/AIDS means that it is impossible to collect accurate data on the spread of the disease.

Gay men are often fearful of admitting to doctors how they became infected and instead say that they contracted it through heterosexual sex. Drug users, who can face long prison sentences in some countries in the region, do the same.

Recent legislation banning the promotion of same sex partnerships and long-standing travel restrictions in some parts of the region for people with HIV have only further marginalised groups in which the disease is spreading rapidly. This presents a major problem in effectively dealing with the epidemic, say doctors, because it prevents them from gaining a clear view of the disease’s epidemiology.

People with HIV/AIDS in Moscow say they have no hope of any help from a government they say has essentially abandoned them.

Ivan Anoshkin, a sufferer from Togliatti in south-west Russia, told IPS: “I don’t have any regular income but they won’t give me any invalidity benefits and I have to do manual work just to make sure I don’t die from hunger.

“HIV/AIDS is hard to treat and in view of the fact that there are no social services or clinics to help, it means I’m on my own with everything. I have to make sure I don’t break down just so I won’t die.”