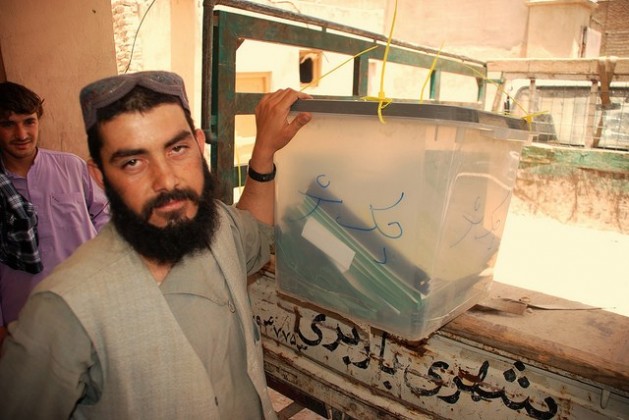 A worker for the Independent Electoral Commission (IEC) of Afghanistan carries a box of votes. Credit: Giuliano Battiston/IPS

LAKSHKARGAH, Afghanistan, Jun 20 2014 (IPS) - With protests erupting Thursday over alleged voter fraud during Afghanistan’s first-ever democratic transfer of power, and presidential hopeful Abdullah Abdullah announcing his intention to boycott the electoral process, ordinary Afghans are beginning to despair that they will ever start to feel a sense of normalcy in their country, ravaged by years of civil war.

According to provisional data seven million people – roughly 60 percent of the electorate – came out to cast their votes on Saturday Jun. 14, standing as testament to the fact that scores of Afghans wish to participate in a democratic political process.

“Our country is economically very weak and [Ashraf] Ghani is the right man to solve our problems.” -- Said Faizalahq, a shopkeeper in Lashkargah, Afghanistan
Ignoring threats that the Taliban would cut off voters’ hands and fingers, millions queued at thousands of ballot boxes around the country to choose a successor for out-going President Hamid Karzai, banned by the constitution from seeking yet another mandate after 13 years in power.

The race is close, with former foreign minister and leader of the predominantly Tajik Jamiat-e-Islami Party, Abdullah Abdullah, pulling in 45 percent of the vote during the first round of elections, partly owing to his fierce and vocal opposition to the Taliban.

But Ashraf Ghani, a popular Pashtun politician who served as finance minister and chancellor of Kabul University, won many hearts in the run-up to the election due to his strong economic platform.

Some commentators believe that Abdullah’s denouncement of the Independent Electoral Commission (IEC), and his allegations that massive ballot box stuffing could swing the final results in Ghani’s favour, are a response to the latter’s growing popularity.

Abdullah, meanwhile, has refuted such claims, standing by his belief that over a million votes were fraudulently cast. Indeed, the Transparent Election Foundation for Afghanistan, an independent group whose 9,000 observers monitored the voting, says the IEC’s projection appears too high, adding that six million voters is a more realistic projection.

But while political wrangling has stolen the spotlight for the time being, thousands of Afghans continue to hold out hope that when the results are announced on Jul. 22, the chosen candidate can get down to the real businesses of mending the ailing country.

Hailing from the Helmand province in the ‘Pashtun belt’ of southern Afghanistan, 60-year-old Haji Mohammad Asif tells IPS he voted for Ghani in the hopes that he will “improve the economy and make the country independent from external sources.”

Asif is a member of a local tribal ‘shura’, a council comprised of 8,300 families who live in Lashkargah, capital of the Helmand Province, but whose roots are in the eastern provinces of Nangarhar, Nuristan, Laghman and Kunar.

The head of the council, 35-year-old Mohammad Asif Mohammadi, told IPS, “We collectively decided to vote for Ghani; he has skills and high education, he is honest, he was not involved in past crimes. He will bring peace to the country.”

Although they number only a few thousand, this council represents a popular current in Afghanistan, which favours Ghani’s promise of economic stability over Abdullah’s pledge to bring political security.

By way of explaining their loyalties, other Ghani supporters called IPS’ attention to the two candidates’ seemingly opposite personal histories: while Ghani was teaching economics at the Maryland-based Johns Hopkins University, Abdullah, a trained doctor, was providing medical aid to the anti-Soviet mujahideen fighters in the Panjshir Valley in north-central Afghanistan.

And in 1992, following the collapse of the pro-Soviet government headed by then-president Mohammad Najibullah, Abdullah became the spokesperson for the Ministry of Defense in the newly established Islamic State of Afghanistan, while Ghani was busy planning structural adjustment programmes at the World Bank.

“Our country is economically very weak and Ghani is the right man to solve our problems,” a shopkeeper named Said Faizalahq told IPS outside a school in Lashkargah, one of 683 makeshift polling stations that were erected across Helmand, according to the IEC.

Nearly 90 percent of Afghanistan’s state revenue comes from international donors, who have already reduced their financial support substantially, due to the partial withdrawal of foreign troops.

According to the latest forecast by the World Bank, economic growth plummeted in 2013 to an estimated 3.6 percent of gross domestic product (GDP) from 14.4 percent in 2012, possibly as a result of investors’ concerns about the security situation in the country.

“After a decade of strong revenue growth, domestic revenues declined to 9.5 percent of GDP in 2013, from 10.3 percent in 2012 and a peak of 11.6 percent in 2011,” the document stated. “Economic growth is projected to remain weak at 3.2 percent in 2014 due to heightened uncertainty and lower agriculture output.”

A bleak outlook, but one that Ghani has promised to rectify by consolidating the economy and utilising the country’s vast, untapped mineral resources, an asset considered to be worth up to three trillion dollars.

His five-year economic plan promises to focus on agriculture, the construction of a railway network, a reduction in taxes and a pledge to boost the country’s local carpet industry.

Abdullah, meanwhile, appeals to those voters who wish to see Afghanistan’s main opposition groups (AOGs) defeated once and for all. He has also criticised Karzai’s administration for he calls its “accommodating approach” to the political situation, insisting that peace-talks cannot go ahead until the AOGs collectively renounce violence.

This position has won Abdullah support among those who see no future for Afghanistan – economic or otherwise – without a definitive end to militarism and violence, which the last 13 years have proved to be nothing but destructive.

“If we establish a new, accountable and effective government, we are going to bring peace to the country, because one of the main conflict-drivers is corruption and [a lack of] ccountability,” Abdul Salam Zahid, director of Radio Lashkargah, told IPS.

The only issue the candidates appear to be agreed upon is the Bilateral Security Agreement (BSA) that promises to keep U.S. troops in the country after 2014. Karzai’s refusal to sign the accord strained relationships between Afghanistan and the U.S. and endangered funding flows by international donors aimed at strengthening domestic security forces and propping up crucial reconstruction programmes.

Karzai’s move found favour among many Afghans who see national sovereignty as a point of pride after years of living through a foreign occupation.

Exiting a polling station on Jun. 14, 63-year-old Abdul Rah­man told IPS, “We should be able to defend ourselves without the help of foreign countries. I do not trust the Americans. This is the reason I reject the [BSA].”

But his desire for immediate independence will be frustrated, no matter the outcome of the election, as both candidates have vowed to make the signing of the BSA a priority should they be elected to office at the end of July.