Q&A: “We Need the Dissolution of NATO – It Has No Mission”

BERLIN, Jun 2 2014 (IPS) - Since the collapse of the former Soviet Union, the United States has developed from a super power into a hyper power, says Subrata Ghoshroy, researcher at the Massachusetts Institute of Technology (MIT). This development has far reaching negative consequences in terms of global security – continual promotion of the international arms race as well as persistent devaluation of diplomacy and international law.

As one of the key speakers at a symposium on ‘Science between War and Peace’ held in Berlin from May 16 to 18 one hundred years after the outbreak of the First World War, Ghoshroy highlighted the militarisation and utilisation of research for war purposes in the United States. The Berlin symposium was organised by ‘Network 1914-2014’, an alliance of peace groups including the International Association of Lawyers Against Nuclear Arms (IALANA) and the International Physicians for the Prevention of Nuclear War (IPPNW). 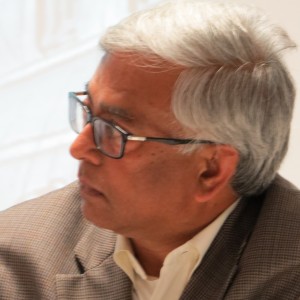 In an interview with IPS, Ghoshroy, an engineer of Indian descent, describes how sophisticated weapon systems are being used as dominant instruments of U.S. foreign policy. Ghoshroy himself had worked in the field of high-energy laser before he turned defence analyst and whistleblower against faked ‘Star Wars’ missile defence tests by U.S. government contractors. At MIT, a private research university in the U.S. city of Cambridge, he directs a project to promote nuclear stability in South Asia.

IPS: We are experiencing ongoing militarisation and the use of research for military purposes. Are peace scientists like you an endangered species?

Ghoshroy: Yes, and very much so, unfortunately. The term ‘peace scientist’ really doesn’t exist in the United States. It’s more in a German context that you have these terms such as ‘Friedensforschung’. There are individual scientists who are opposed to war. They express themselves. But there is really no discipline.

So, individuals do things their own way. And of course there are scientists all over the United States with the heritage of the Manhattan Project, the U.S.-led research and development project that produced the first atomic bombs in the 1940s. All these scientists from top universities worked there, they came back and became very much against the bomb. And there is some legacy of them still lingering in U.S. departments, particularly in physics departments where more people have become more anti-war and openly speak if not write about the problems of military research – but very few.

“The collapse of one super power, the Soviet Union, marked the beginning of the United States as a hyper power. Blind faith in technology fuelled unilateralism” – Subrata Ghoshroy

IPS: How much of U.S. academic research is sponsored by the Defence Department and how much is being invested annually?

Ghoshroy: In the United States, the Defence Department spends together about three billion dollars annually in universities. In certain disciplines – in physical sciences, in engineering, materials engineering, aerospace, mechanical engineering, physics, chemistry and computer science – the support from the military is absolutely crucial and dominating. So, if you look at numbers in electro-engineering, 72 percent of all research at U.S. universities is funded by the military, and in mechanical engineering maybe 60 percent and in computer science maybe 55 percent.

IPS: There is a long history of using academic research for military purposes. How has it developed since the end of the Cold War and 9/11 (the September 11, 2001 attacks in the United States)?

Ghoshroy: The real collaboration between science and the military started with the Manhattan Project (a research and development project that produced the first atomic bombs during the Second World War II. That was the beginning. And then, after the war ended in 1945, this military had already established laboratories in different universities like MIT and other schools. So, they wanted to see how they could continue this relationship after the war and they came up with this plan that the military would invest massively and it would be very easy politically to support spending on science if it was done through the military.

Public support for the military was very strong after the defeat of fascism. The Second World War was a tremendous thing for the Americans. So they wanted to keep doing it and found a way for all science to be done through the military and then they would get support in Congress for this.

As the Cold War developed, the new rationale was science and technology to give the United States the upper hand against the Soviet Union. I believe that this paradigm that started after the end of the Second World War and continued throughout the Cold War has been maintained in all the years since the collapse of the Soviet Union. But there is no big enemy, no enemy that we need so much money for our military to defeat. Russia spends so little money compared with the United States or China, also although it’s coming up. But regardless, all this spending on weapons is primarily coming from the United States. The universities, the military and its contractors, they all act together to promote science and science for weapons.

IPS: And since the beginning of the so called war against terrorism?

Ghoshroy: After 9/11, the public was completely terrified, so it gave the government tremendous power to do anything and, yes, it gave the military and universities money for everyone who wanted to go into research to support the so-called war on terrorism. I would not say that the money has increased so much for research. Money has increased for other things like homeland security. But it certainly has given them another opportunity to support and boost science to fight this new enemy.

IPS: You have said that since the collapse of the Soviet Union, the United States super power has turned into a hyper power. What have been the consequences?

A: Well, first of all, they are really blinded by this position that they have now. Nobody can do any check and balance on their actions. When I was in Congress, when we discussed foreign policy in meetings of the staff in Congress to advise members, there were no counter arguments against what they were doing. They would say “we will prevail, eventually; there are some people making noises, but that doesn’t matter, we will prevail.”

This is very dangerous. This vision of America – being a force for and doing good in the world – is really believed by the people and policy makers. But in many instances, or actually most instances, they are certainly doing the opposite. They don’t understand different cultures, the peculiarities of different societies and civilisations, so they see everything in this American way. “Our democracy, our form of democracy, is the right one” even though there are other civilisations that have lived for thousands of years.

The collapse of one super power, the Soviet Union, marked the beginning of the United States as a hyper power. Blind faith in technology fuelled unilateralism, variously termed as humanitarian, pre-emptive and regime change interventions. This hyper power is totally defying the United Nations, it is totally against everything. That has led to lawlessness in and out the country. “We don’t like the government in Iraq. So let’s go change it.”  But, I am optimistic that the post-Cold War order may be coming to an end.

IPS: Are we experiencing a devaluation of diplomacy?

Ghoshroy: Definitely. U.S. foreign policy always talks about diplomacy. But American diplomacy means that you speak softly but carry a big stick. This is how they operate. So the big stick is always there.

Diplomacy is about give and take. U.S. policy is not diplomacy in that way. Yes, they have their diplomats who sit down across the table with the people of Iran or wherever. But the moment that their plan is not accepted, diplomacy is over. They will bomb. So they don’t care about diplomacy in the original sense of the term where you negotiate for a peaceful solution of give and take. Either, it’s my way or the highway.

IPS: Is the economic downturn a chance to counter the trend of militarisation and reduce military expenditure?

Ghoshroy: It does offer an opportunity, but it’s a very hard uphill battle. Cutting a military budget is very difficult in the United States because military contractors are very tied to politicians, no matter whether they are Republicans or Democrats. All these people and their election campaigns receive funds from the military contractors like Lockheed and Boeing and the others all have strong lobbyists in Washington. All sides are benefitting.

IPS: What are the chances of winning the war against wars?

Ghoshroy: It’s a slow process. In the United State there is a lack of political consciousness. The country is isolated. And in the media you read what is being propagated by the establishment.

In Viet Nam, the public reacted against the war when thousands of their beloved ones came back in body bags. In wars such as in Iraq and Afghanistan the number of victims is relatively low. Further, journalists were not allowed to photograph the returning dead. And there is another big difference. The people being killed are not middle class people who can influence the system.

Yet, People are turning against these wars, although it is not moral but economic reasons that are the decisive factors.

IPS: European members of NATO rarely criticise the United States for its unilateral warfare. Do you have any advice for them?

Ghoshroy: I have been saying in many meetings that it would be so fantastic if European countries like Germany that suffered and inflicted so much pain on other countries in the world were to be the ones to take the initiative to stand up against the United States in terms of what they want to do with NATO.

First of all, we need its dissolution. It should have been dissolved when the Warsaw Pact was dissolved. It has no mission. And I think stopping warmongering in Europe would be a further important first step for world peace. It’s unfortunate that despite people’s actual strong support for non-intervention, even the so-called parties of the Left in Europe, like the French Socialists or the Greens in Germany, support strengthening NATO. This is not helpful in terms of building peace.