WASHINGTON, Jun 13 2012 (IPS) - Countering a two-year trend, the world overall became slightly more peaceful over the past year, according to an annual report released here on Tuesday.

The United States, however, moved down seven places to 88 out of 158, a “fairly low rank (that) largely reflects much higher levels of militarisation and involvement in external conflicts”, according to the Global Peace Index (GPI) 2012. 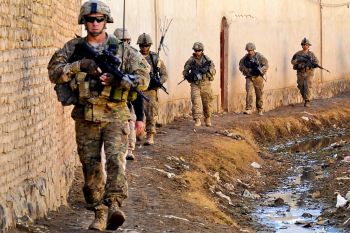 In Iraq and Afghanistan, the United States has proven itself largely incapable of engaging in a way that leads to peaceful societies. Credit: U.S. Defence Department

The report notes that although U.S. military expenditure “declined sharply” between 1991 and 2000, it “has now returned to Cold War levels”. Worryingly, the GPI finds that higher military expenditure (as a percentage of overall gross domestic product) correlates with lower levels of peace.

The U.S. also continues to score among the highest in the world on the proportion of its population in jail. (A U.S.-specific Peace Index was released in April.)

The report, now in its sixth year, is put out by the Institute for Economics & Peace, a nonpartisan research organisation based here in Washington, in collaboration with the Economist Intelligence Unit. It offers one of the few global looks at overall peacefulness – and even attempts to put a dollar amount on that issue.

This year’s GPI suggests that an entirely peaceful world would have had a positive net impact of some nine trillion dollars.

Looking at 23 indicators across 158 countries, the GPI found “improvements in the overall scores across all regions” except for the Middle East and North Africa. Due to unrest surrounding the Arab Spring – scored negatively according to GPI metrics – for the first time sub-Saharan Africa is not ranked as the world’s least peaceful region.

Indeed, all five of the countries that experienced the greatest falls in rankings were affected by the Arab Spring. Syria experienced the largest deterioration, dropping by 31 places to 147th.

At the U.S. unveiling of the report on Tuesday, former State Department official Anne-Marie Slaughter said the objective structure of the GPI helps in figuring out how exactly to define peace.

In so doing, Slaughter says, the rankings are able to collapse state and overall security into one category, contrary to traditional policy thinking.

“This includes the positive work of making life better,” Slaughter says, “not just avoiding what is bad.”

The eight factors that make up the Positive Peace Index – including high levels of education, low levels of corruption, well-functioning government and equitable distribution of resources – are described by Institute for Economics & Peace U.S. policy director Michael Shank as a roadmap for making peace.

According to the report’s researchers, “The imperative of deepening understanding of how to create peace has been highlighted by the recent state-building experiences such as in Iraq and Afghanistan.”

Unfortunately, the key player in both of those state-building exercises – the United States – has proven itself largely incapable of engaging in a way that leads to peaceful societies. After nearly a decade of U.S.-led nation-building, the report notes, both Afghanistan and Iraq “are still rooted at the bottom of the GPI”.

According to Emily Cadei, a reporter covering the U.S. Congress who spoke at the report’s presentation, past U.S. engagement overseas bodes particularly poorly for two GPI findings.

First, over the past six years GPI researchers have recorded a fall in external, state-to-state conflicts and a rise in internal violence. Second, as noted earlier, the GPI reports that increased militarisation – for instance, the amount of money a state spends on its military – correlates with lower levels of peace.

“The fact that internal conflicts are rising is bad news because the U.S. is not equipped to deal with such forms of violence – the government continues to lack a consensus on how to do so,” Cadei said on Tuesday.

“Further, the fact that militarisation is negatively correlated with peace has not sunk in yet in the U.S. The overwhelming view in the government is still that peace comes through strength; in Congress, aid is always associated with security.”

Echoing the GPI’s warnings on current U.S. military spending levels, Lawrence Wilkerson, a former U.S. Army colonel and professor of government and public policy, says this mindset goes back to a Cold War paradigm that hasn’t been able to find new footing following the 1991 fall of the Soviet Union.

“The new index shows that the United States needs to be more circumspect on what we try to do in other countries,” Wilkerson said on Tuesday. “For 50 years we’ve proven that we’re damn poor at peace-building.”

Although the GPI reports an overall decrease in military spending around the world as a result of austerity measures over the past year, Wilkerson reports that U.S. military spending may now constitute more than 10 percent of GDP – far higher, he says, than the three percent often cited by the Defence Department.

This does not include the massive and increasing outlay given to private military contractors.

“I’d be lying if I said the military-industrial complex doesn’t have significant impact on U.S. foreign policy,” Wilkerson says.

“If you want to completely reduce a country by force, the U.S. can do that. But anything after that, the U.S. has shown that it simply cannot do.”