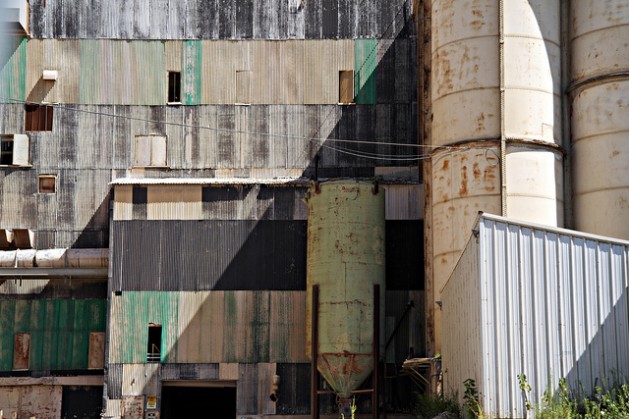 Saint Mary's Cement Plant, Dixon, Illinois. China’s steel industry is far less efficient than the U.S., but the reverse is true when it comes to cement production. Credit: Wayne Wilkinson/cc by 2.0

BONN, Oct 27 2014 (IPS) - China and the United States are responsible for 35 percent of global carbon emissions but could do their part to keep climate change to less than two degrees C by adopting best energy efficiency standards, a new analysis shows.

Although China’s energy use has skyrocketed over the past two decades, the average American citizen consumes four times more electricity than a Chinese citizen.

Under business as usual economic growth, the new infrastructure planned and likely to built over the next five years will commit the world to enough CO2 to max out the 2C carbon budget.

However, when it comes to energy efficiency, China’s steel industry is far less efficient than the U.S. The reverse is true when it comes to cement production, according a new Climate Action Tracker analysis of energy use and savings potential for electricity production, industry, buildings and transport in the two countries.

If China and the U.S. integrate the best efficiency policies, “they would both be on the right pathway to keep warming below two degrees C,”said Bill Hare a climate scientist at Climate Analytics in Berlin, Germany.

Both countries need to “dramatically reduce”their use of coal, Hare said.

Right now, neither country is a global leader in any sector, the analysis found. Climate Action Tracker is a collaboration between Climate Analytics, Ecofys and the Pik Potsdam Institute for Climate Impact Research.

“We looked at how well both the U.S. and China would do if they each adopted a ‘best of the two’practice in electricity production, industry, buildings and transport. We found this, alone, would set them in a better direction,”Niklas Höhne of Ecofys told IPS.

One major reason U.S. energy use per person is 400 percent greater is that living space per person in the U.S. is twice that in China, while Chinese buildings generally consume much less energy.

“By no means are China’s buildings the most energy efficient. [But] they are generally newer and use less air conditioning and heating than in the U.S.,”said Höhne.

However, energy consumption in China’s residential sector is significantly increasing. If both were to move to European Union (EU) standards, this would produce massive reductions, the report found.

Another major reason for greater U.S. energy use is that car ownership is 10 times higher than China.  In addition, China has lower emissions per car due to somewhat stricter standards. Again, if both were to move to global best practice (e.g., emission standards for cars as in the EU, increase of share of electric cars as in Norway) there could be a major difference.

China and the U.S. are very different but could learn from each other, said Michiel Schaeffer, a scientist with Climate Analytics. Better yet, they could move to a true leadership position by adopting the best practices in the world.

“At the moment, neither are leading,” he noted.

Time is not on anyone’s side. Global carbon emissions continue to increase year after year and if they don’t peak and begin to decline in the next two or three years, it will be extremely difficult and costly to keep global temperatures from rising above two degrees C.

Temperatures have risen .085 degrees C so far and are linked to billions of dollars in damages, with extreme events affecting tens of millions people, as previously reported by IPS.

Should both the U.S. and China adopt the global best practices on energy use, U.S. emissions would decline 18 percent below 2005 by 2020 (roughly five percent below 1990 levels) and China’s would peak in the early 2020s.

That would close the crucial ‘emissions gap’by nearly 25 percent. The emissions gap is the amount of carbon reductions over and above current commitments that are needed before 2020 in order to have a good chance of staying below 2C.

The EU is by far the global leader on climate cutting emissions by more than 20 percent by 2020 compared to 1990, and last week committed to slashing emissions at least 40 percent by 2030.  A June 2014 CAT analysis noted that the U.S. and other advanced economies which are known as Annex 1 countries in U.N. climate treaties have to trim their carbon budgets 35 to 55 percent by 2030 and be fossil fuel free around 2050.

While those dates may seem far in the future, the reality is that no new carbon-burning infrastructure— buildings, homes, vehicles, power stations, factories and so on  —can be built after 2018.

The only exceptions would be for replacing existing infrastructure, according to a recent study of what’s termed carbon commitments. Build a gas-heated home today and it will emit CO2 this year and be committed to more CO2 every year it is used.

Under business as usual economic growth, the new infrastructure planned and likely to built over the next five years will commit the world to enough CO2 to max out the 2C carbon budget. That budget is the amount of CO2 or carbon that can be emitting and stay below 2C.

After 2018, the only choice will be to shut down power plants and other large carbon emitters before their normal lifespan.

Any plan or strategy to cut CO2 emissions has to give far greater prominence to infrastructure investments. Right now the data shows “we’re embracing fossil fuels more than ever,” Robert Socolow of Princeton University and co-author of the study told Vice Motherboard.

“We’ve been hiding what’s going on from ourselves: A high-carbon future is being locked in by the world’s capital investments,” Socolow said.