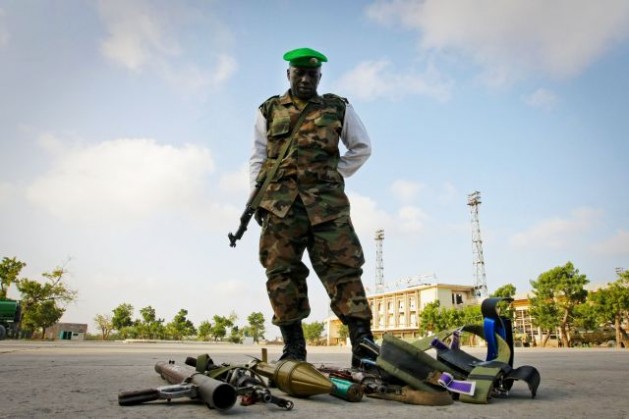 A soldier stands over the weapons seized from four suspected members of Al Shabaab, the Islamic insurgent group, in Mogadishu, Somalia. The militants, all in their mid-twenties, were captured during joint security operation by the African Union Mission in Somalia (AMISOM) and Somali security services and were found in possession of a rocket-propelled grenade, two sub-machine guns and 84 rounds of ammunition. Credit: UN Photo/Stuart Price

Nounou Booto Meeti, programme director at the Centre for Peace, Security and Armed Violence Prevention, told IPS that in her own home country, the Democratic Republic of Congo (DRC), the uncontrolled trade of arms has contributed to human rights violations including rape and the recruitment of child soldiers.

"We’ve seen the Syrian government do horrendous things to their own civilians, and arms are continuing to go there, notably from Russia. That is a perfect modern case in point of what the ATT could stop if both of those countries were a part of it." -- Allison Pytlak from Control Arms

Meeti has actively campaigned for a global ATT, including advocating for the inclusion of a gender-based violence criterion.

The criterion is especially important for countries like the DRC where rape and sexual slavery has been used to systematically terrorise village after village.

Meeti emphasised that women, men and children are all affected by gender-based violence. In the DRC, when a village is attacked the men are often killed so that the women who are alive will not be able to defend themselves, she explained.

The Arms Trade Treaty, if implemented properly, will require states selling weapons to not only consider if the weapons are going to a country where there are systematic violations of human rights, including gender-based violence, but also how likely it is that those weapons will end up there through diversion from another country.

She said that it has taken a long time to get to this point because there are a lot of interests in the global arms trade, which is an industry that earns billions and billions of dollars primarily for a small group of arms producing countries.

She added that “the transparency within the ATT will influence the reduction of military expenses in favour of development.”

The proliferation of weapons in countries like the DRC and the free flow of weapons into the ‘wrong hands’ has been allowed to continue because of an almost complete lack of international regulation of the arms trade.

According to Amnesty International, there are more international laws regulating the trade of bananas than of weapons.

Meeti said that they had shown that there was no management of government stockpiles of weapons in the DRC, making it easy for arms to be diverted to the wrong hands. Porous borders meant that weapons could easily be brought in from any of the nine countries that share borders with the DRC.

She said that non-state actors also had ready unregulated access to arms, funded by the DRC’s vast resource wealth and international actors with interests in exploiting those resources.

Allison Pytlak from Control Arms told IPS that the ATT is “about introducing responsibility into the arms trade, not about trying to stop the trade of arms.”

The treaty also asks “all parties involved, especially the arms dealers, to think twice about where their weapons are going,” Pytlak said.

She said that the ATT aims to fix problems like states receiving weapons after they had stopped acting responsibly.

“Syria is a good example, we’ve seen the Syrian government do horrendous things to their own civilians, and arms are continuing to go there, notably from Russia. That is a perfect modern case in point of what the ATT could stop if both of those countries were a part of it,” Pytlak said.

Pytlak also said that weapons often end up in the ‘wrong hands’ through diversion, corrupt officials and theft from insecure government stockpiles.

“A lot of guns start out on the legal market and then end up on the illegal market,” she noted.

“By having export licensing officials who have a second thought about, where are these weapons really going to go? It looks a little bit unstable there, or there’s a history of diversion there, if they start thinking twice about that, the source might dry up and diversion will cease,” she said.

Only the first step

Millions of new weapons and 12 billion bullets are produced each year, while over 800 million guns already exist in the world.

The entering into force of the ATT on Wednesday with 61 ratifications and 130 signatures is only a small, albeit notable, step in the right direction.

Two thousand people die from armed violence every day. Armed violence is also fuelling the global refugee crisis, with over 26 million people around the world displaced due to conflict.

Arms affected countries are predominantly also lower income countries, and may struggle to implement the treaty.

Pytlak says that one current option being explored is the possibility of using Official Development Assistance (aid) to help lower income countries with the costs of implementing the treaty.

A new report from Chatham House says that the indirect impact of the arms trade on development includes the diversion of funds from healthcare to defence, increased unemployment and decreased educational opportunities.

In a statement Tuesday U.N. Secretary-General Ban Ki-Moon described the adoption of the Arms Trade Treaty as historic.

“Ultimately, it attests to our collective determination to reduce human suffering by preventing the transfer or diversion of weapons to areas afflicted by armed conflict and violence and to warlords, human rights abusers, terrorists and criminal organisations,” Ban said.