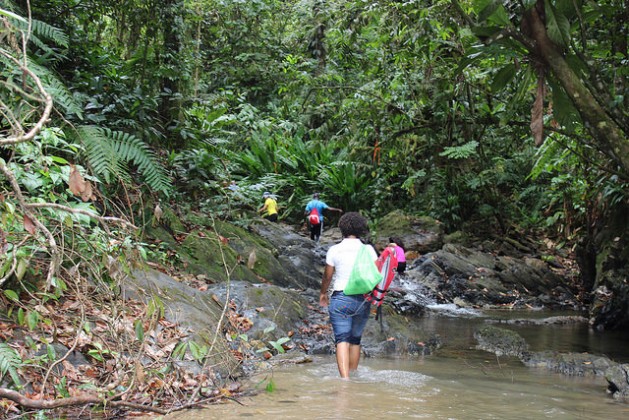 PORT OF SPAIN, Jan 19 2015 (IPS) - At 24 years old, Stefan Knights has never been on the side of those who are sceptical about the reality and severity of climate change.

A Guyana native who moved to Trinidad in September 2013 to pursue his law degree at the Hugh Wooding Law School, Knights told IPS that his first-hand experience of extreme weather has strengthened his resolve to educate his peers about climate change “so that they do certain things that would reduce emissions.”

“Notwithstanding our minor contribution to this global problem we are taking a proactive approach, guided by the recognition of our vulnerability and the tremendous responsibility to safeguard the future of our people." -- Foreign Affairs Minister Winston Dookeran

Knights recalled his first week in Trinidad, when he returned to his apartment to find “the television was floating, the refrigerator was floating and all my clothes were soaked” after intense rainfall which did not last more than an hour.

Knights laments that young people from the Caribbean and Latin America are not given adequate opportunities to participate in the major international meetings, several of which are held each year, to deal with climate change.

“These people are affected more than anybody else but when such meetings are held, in terms of youth representation, you find very few young people from these areas,” he said. 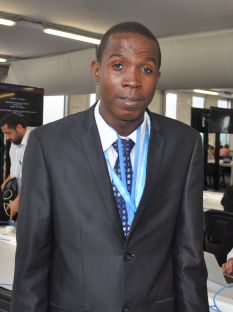 “Also, the countries that are not independent within Latin America and the Caribbean, like Puerto Rico which is still a territory of the United States, Montserrat, the British and U.S. Virgin Islands, the voices of those people are not heard in those rooms because they are still colonies.”

Knights, who is also an active member of the Caribbean Youth Environment Network (CYEN), said young people are ready to lead.

“They are taking the lead around the world in providing solutions to challenges in the field of sustainable development,” he explained.

“For instance, CYEN has been conducting research and educating society on integrated water resources management, focusing particularly on the linkages between climate change, biodiversity loss and unregulated waste disposal.”

CYEN has been formally recognised by the Global Water Partnership (GWP) as one of its Most Outstanding Partners in the Caribbean.

As recently as December 2014, several members of CYEN from across the Caribbean participated in a Global Water Partnership-Caribbean (GWP-C) Media Workshop on Water Security and Climate Resilience held here.

CYEN has been actively involved in policy meetings on water resources management and has conducted practical community-based activities in collaboration with local authorities.

CYEN National Coordinator Rianna Gonzales told IPS that one way in which young people in Trinidad and Tobago are getting involved in helping to combat climate change and build resilience is through the Adopt a River (AAR) Programme, administered by the National Water and Sewerage Authority (WASA).

“This is an initiative to involve the community and corporate entities in the improvement of watersheds in Trinidad and Tobago in a sustainable, holistic and coordinated manner,” Gonzales said.

“The aim of the AAR programme is to build awareness on local watershed issues and to facilitate the participation of public and private sector entities in sustainable and holistic projects aimed at improving the status of rivers and watersheds in Trinidad and Tobago.”

Most of Trinidad and Tobago’s potable water supply (60 per cent) comes from surface water sources such as rivers and streams, and total water demand is expected to almost double between 1997 and 2025.

With climate change predictions indicating that Trinidad and Tobago will become hotter and drier, in 2010, the estimated water availability for the country was 1477 m3 per year, which is a decrease of 1000 m3 per year from 1998.

Deforestation for housing, agriculture, quarrying and road-building has also increased the incidence of siltation of rivers and severe flooding.

“The challenge of water in Trinidad and Tobago is one of both quality and quantity,” Gonzales said.

“Our vital water supply is being threatened by industrial, agricultural and residential activities. Indiscriminate discharge of industrial waste into waterways, over-pumping of groundwater sources and pollution of rivers by domestic and commercial waste are adversely affecting the sustainability of our water resources.

“There is therefore an urgent need for a more coordinated approach to protecting and managing our most critical and finite resource – water,” she added.

Trinidad and Tobago’s Minister of Foreign Affairs Winston Dookeran said there is an urgent need to protect human dignity and alleviate the sufferings of people because of climate change.

“We know that the urgency is now. Business as usual is not enough. We are not on track to meet our agreed 2.0 or 1.5 degree Celsius objective for limiting the increase in average global temperatures, so urgent and ambitious actions to reduce greenhouse gas emissions in the atmosphere is absolutely necessary,” he told IPS.

Dookeran added that “there is no excuse not to act” since economically viable and technologically feasible options already exist to significantly enhance efforts to address climate change.

“Even with a less than two degrees increase in average global temperatures above pre-industrial levels, small island states like Trinidad and Tobago are already experiencing more frequent and more intense weather events as a result of climate change,” Dookeran said.

The foreign affairs minister said residents can look forward to even more mitigation measures that will take place in the first quarter of this year with respect to the intended nationally determined contributions for mitigation.

“Notwithstanding our minor contribution to this global problem we are taking a proactive approach, guided by the recognition of our vulnerability and the tremendous responsibility to safeguard the future of our people,” he said.

“Trinidad and Tobago has made important inroads in dealing with the problem as we attempt to ensure that climate change is central to our development. As we prepare our economy for the transition to low carbon development and as we commit ourselves to carbon neutrality, the government of Trinidad and Tobago is working assiduously towards expanding the use of renewable energy in the national energy mix,” he added.