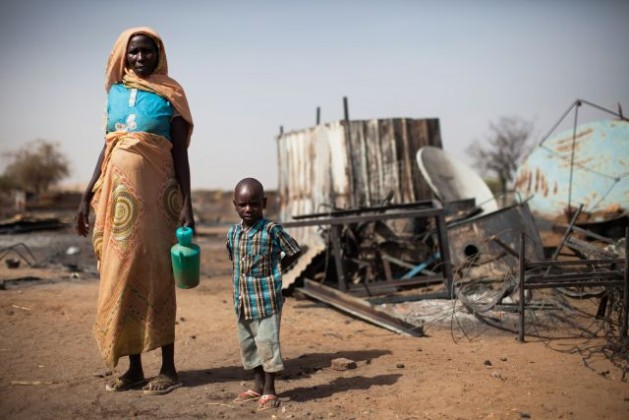 UNITED NATIONS, Feb 11 2015 (IPS) - More than 200 Darfurian women were reportedly raped by Sudanese troops in one brutal assault on a town in October 2014, with the conflict in war-torn Darfur escalating to new heights.

A report released by Human Rights Watch (HRW) on Wednesday claimed up to 221 women in the town of Tabit, in northern Darfur, were raped over a 36-hour period between Oct. 30 and 31.

“Three of them participated in the attack, and two said they had orders to rape. Their attacks were more or less a pre-emptive strike on the town for allegedly supporting rebel groups." -- HRW's Jonathan Loeb

Several hundred Sudanese government troops were said to have looted the town, severely beat men and boys, and sexually assaulted women and girls.

Jonathan Loeb, the report’s author and a fellow in the Africa division of Human Rights Watch, told IPS that HRW investigators were forced to conduct secretive phone interviews with victims and witnesses, as Sudanese forces blocked all access to the town. Even in the aftermath of the October attack, Loeb said United Nations peacekeepers, aid workers, human rights investigators and journalists were denied access.

“The only time they let anyone in, it was in circumstances not remotely close to a real investigation,” Loeb said.

“People did take real risks to talk to us. Some only wanted to speak after they obtained a new phone card or number that wasn’t registered to them, and some only spoke once they were outside the town.”

Witnesses and victims told of brutal beatings and whippings, as well as repeated rapes. They reported Sudanese forces claiming the attack was in retribution for the disappearance of a soldier from a nearby army base.

“[The soldiers] made us lie with our faces down and they said: ‘If anyone [lifted] their head it would be shot off. And if you don’t find our missing soldier you will be food for termites,’” a man called Idriss told HRW.

Khatera, a woman, explained the systematic nature of the Sudanese attack.

“Immediately after they entered the room they said: ‘You killed our man. We are going to show you true hell.’ Then they started beating us. They took my husband away while beating him. They raped my three daughters and me,” she said.

“Some of them were holding the girl down while another one was raping her. They did it one by one. One helped beat and the other raped. Then they would go to the next girl.”

Loeb said investigators had several theories on the reason behind the attack.

“We don’t know for certain, but from the victims’ perspective, they were being collectively punished for the soldier going missing. They were accused of abducting or killing him,” he said.

He said other possible reasons for the attack included discouraging rebel forces from using Tabit as a meeting point before attacking the Sudanese base. Four Sudanese defectors told HRW the base had received intelligence that a rebel commander was to soon arrive in Tabit.

“Three of them participated in the attack, and two said they had orders to rape. Their attacks were more or less a pre-emptive strike on the town for allegedly supporting rebel groups,” Loeb said.

Dan Sullivan, director of policy and government relations with activist organisation United To End Genocide, said the situation in Darfur has sharply deteriorated in recent months.

“It is bad, and it’s getting worse. The sad truth is, we’re seeing the highest levels of violence and displacement since the height of the Darfur genocide almost a decade ago,” Sullivan told IPS.

“A lot of people have been displaced consistently over a long time. There’s lawlessness, tribes fighting over gold reserves, and the government of Sudan continues to drop bombs in direct violation of the U.N. Security Council resolutions. There just hasn’t been any enforcement of violations.”

Both Sullivan and Loeb attributed a recent surge in violence to a newly created militia force, the Rapid Support Force (RSF). Sullivan said the RSF was formed largely of former members of the Janjaweed, the Sudanese counter-insurgency force accused of killing tens of thousands of Darfurians during the genocide.

“They are a reconstitution of the Janjaweed, the men on horseback with guns. It’s the same people, but now they’re in this new force and supported by the government of Sudan,” Sullivan said.

Loeb said it was unclear whether the Sudanese government had directly ordered, or had knowledge of, the Tabit atrocity, but said the government at least played a role in the attempted cover-up.

“We’re able to state the soldiers reported they were given orders by a senior commander, and another travelled from the regional capital to participate. We’re not sure how far up the chain of command these orders came from,” Loeb said.

“We know the government at a variety of levels was complicit in the cover-up, and stopping the investigation going forward.”

Loeb said the commissioner of the locality threatened victims and witnesses with violence or death if they spoke to the U.N or journalists.

“There was significant government involvement, an government-orchestrated cover-up. But exactly how high it went, we don’t know,” he said.

The HRW report calls for the U.N. to make greater interventions into the conflict to protect at-risk Darfurian citizens, as well as for a formal investigation into the Tabit incident.

“Citizens in Tabit are extremely vulnerable. They are living in the same houses where the rapes happened, and Sudanese soldiers are a constant presence. We’re recommending the U.N. mission on the ground establish a permanent presence and base in the town,” Loeb said.

“The Security Council should demand that happen. The incident also requires further investigation by an international body. We say the High Commissioner for Human Rights would be best placed.”

Sullivan said the conflict in Darfur would continue until real structural and political change happened in the region. He said current Sudanese President Omar Hassan Ahmad al-Bashir, in power since 1989 and indicted by the International Criminal Court in 2009 for the campaign of mass killing and rape, would retain power for the foreseeable future.

“It comes down to accountability. The guy in charge at the beginning of the genocide [Al-Bashir] continues to be president. He’s wanted on charge of genocide, but is set for election again and win again in April,” Sullivan said. “This cloud of impunity is a major part of allowing the attacks to continue.”